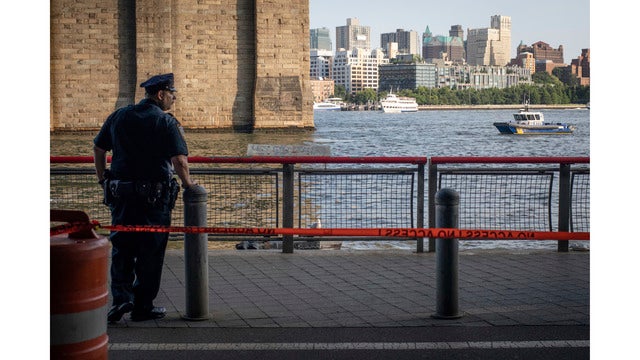 NEW YORK (AP) – Authorities are investigating the death of a baby who was found floating in the water near the Brooklyn Bridge on Sunday.

A family visiting from Stillwater, Oklahoma, spotted the approximately 8-month-old boy wearing only diapers in the shallow water near the Manhattan shoreline at about 4 p.m.

“She just called me over and said there was a baby in the water. I called 911. At that point I thought it was a doll,” Campbell said.

Campbell said he “walked out mid-thigh level” in the East River and retrieved the baby and started CPR. He said the baby had no respiration and showed no pulse.

Police officers arrived minutes later and brought the baby onto the pedestrian walkway where they continued CPR before the baby was taken to a hospital and pronounced dead, police said.

No parent or guardian was present at the scene and the child showed no signs of trauma, police said.

The location near the South Street Seaport on the heavily-trafficked East River, a tidal estuary subject to strong currents, divides Manhattan from Brooklyn. Both park-lined shorelines are usually teaming with tourists this time of year.

It wasn’t clear how long the baby had been in the water. The medical examiner will determine the exact cause of death.