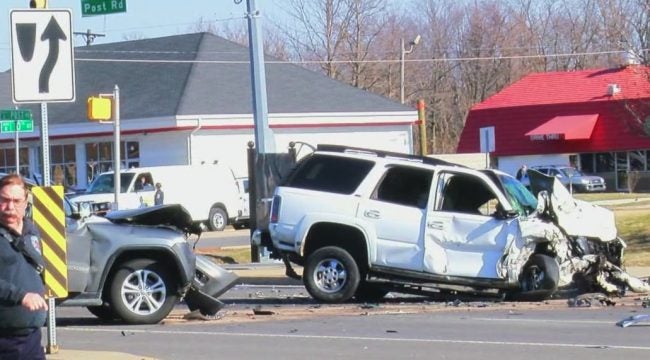 INDIANAPOLIS (AP/WISH) – Authorities say several people were hurt when a driver fleeing from police officers in Indianapolis crashed with four other vehicles.

According to the Lawrence Police Department, 10 people were injured in the multi-vehicle accident. Four of those people were transported to the hospital.

The crash happened about 11 a.m. Sunday on the east side of Indianapolis at 10th Street and Post Road. Lawrence police Deputy Chief Gary Woodruff says the chase began when officers with the suburban department tried to stop a reported stolen vehicle.

The chase involving several police vehicles continued on Interstates 465 and 70 and some city streets before the crash.

Police said a male suspect, with a number of prior felony convictions, is in custody.