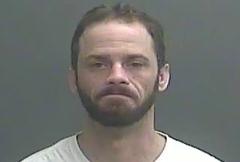 KNOX COUNTY, Ind. (WISH) – A Monroe City man was jailed over weekend after he was pulled over and later determined to have a blood alcohol content of nearly twice the legal limit.

It happened Sunday around 12:15 a.m. Police say a trooper stopped the driver of a Ford pickup truck for speeding. When he approached the car, the trooper detected a strong smell of alcohol.

Small amounts of marijuana, meth and drug paraphernalia were found in the car. Police say the driver, 34-year-old Joshua Rickard, was under the influence of methamphetamine, marijuana and alcohol.

Rickard’s blood alcohol content was .15 percent. He was arrested and taken to the Knox County Jail where he was released from Monday morning after posting bond. He was preliminarily charged possession of meth, driving while intoxicated, possession of marijuana and possession of drug paraphernalia.