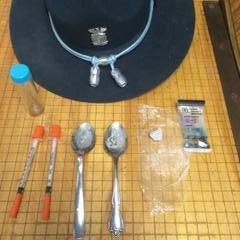 ISP pulled over to the side of westbound Interstate 70, near the 29-mile marker, behind what appeared to be a disabled vehicle. When police approached the car, they found the male driver actively using heroin with a syringe.

Both the driver, Tyler Jackson, and a female passenger, Shauna Sheets, 27, both of Terre Haute, were checked by emergency medical technicians for heroin intoxication and released to ISP.

Police found a syringe and a spoon with a liquid substance, which was positively field tested for heroin, on Jackson. They also found almost 3.0 grams of heroin in a plastic bag in Sheets’ undergarments.