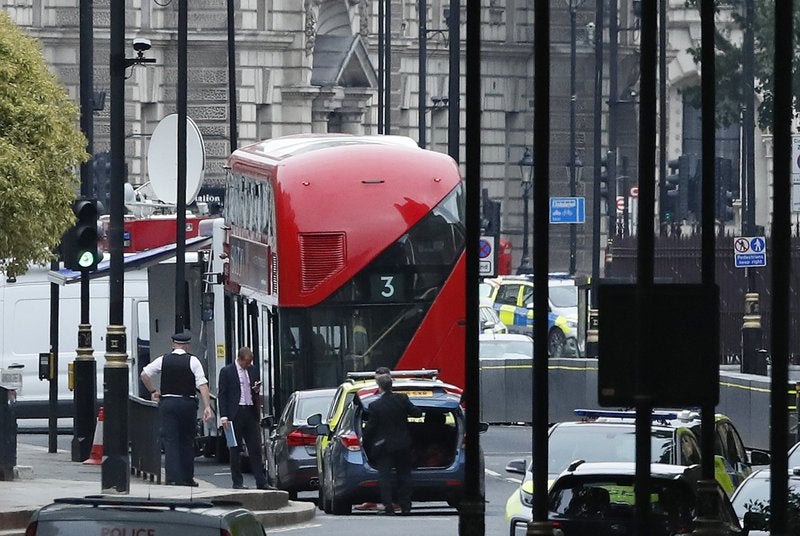 LONDON (AP) — The Latest on a crash outside the House of Parliament in London (all times local):

Police say they are lifting cordons that had sealed off much of London’s Westminster government district after a car crashed into Parliament, injuring three people.

The Metropolitan Police force says cordons are being lifted apart from a stretch of road around the scene of Tuesday morning’s crash.

A man in his 20s has been arrested. Police say they are investigating the incident as terrorism but have not determined the driver’s motive.

Forensics officers in coveralls can be seen collecting evidence from the silver car, which plowed into pedestrians and cyclists before striking a barrier outside Parliament.

U.S. President Donald Trump has called a crash outside Britain’s Parliament “another terrorist attack in London.”

Trump tweeted: “These animals are crazy and must be dealt with through toughness and strength!”

Three people were hurt when a speeding car struck pedestrians and cyclists before crashing into a barrier at Parliament on Tuesday morning.

British police say the crash appears to be deliberate. They are treating is as an act of terrorism, but they have yet to determine the driver’s motive.

Trump has a history of tweeting about violence, or alleged violence, in London. He angered many when he said a London hospital was like a war zone because of knife violence.

London police say an incident in which a car was driven into a barrier near the Houses of Parliament appears to be a deliberate act.

London Assistant Police Commissioner Neil Basu says the motorist who slammed into pedestrians and cyclists near Britain’s Houses of Parliament was arrested on suspicion of terrorist offenses. The suspect is not cooperating with police.

Basu says no other suspects have been identified and there is no “intelligence” of further danger to London.

Britain’s government will be holding a session of its emergency committee following what it described as a suspected terrorist incident near the Houses of Parliament.

The session of the COBRA committee was called after a motorist slammed into pedestrians and cyclists before hitting a barrier near the House of Lords on Tuesday. Two people were hurt, but authorities said none of the injuries is life-threatening.

Prime Minister Theresa May has offered her praise for the emergency services for their “immediate and courageous response,” following the incident.

London’s Metropolitan Police say that they are treating the crash outside of Parliament as a terrorist incident.

Authorities said in a statement Tuesday that a man in his 20s was arrested on suspicion of terrorist offenses after the silver Ford Fiesta collided with a number of cyclists and pedestrians before crashing into the barriers during the morning rush hour.

He is in custody. No one else was in the car, which is being searched at the scene of the accident.

Two people were hurt, but authorities said none of the injuries were life-threatening.

London’s Metropolitan Police say that the Counter-Terrorism Command is leading the investigation after a car crashed into security barriers outside the Houses of Parliament.

There were a number of people injured in Tuesday’s incident, though none are in life-threatening condition.

The police force says it is keeping an open mind about the incident, which comes only a year after Khalid Masood ploughed a car into crowds on Westminster Bridge, killing four people.

Masood abandoned his car then stabbed and killed a police officer before being shot in a courtyard outside Parliament.

London’s Metropolitan Police say no one is in a life-threatening condition following a car crash outside the Houses of Parliament.

Armed police have swooped on the area, cordoning off streets around Parliament Square, Millbank and Victoria Tower Gardens. Sky News video showed a man being arrested after the incident on Tuesday.

London police say that a car has crashed into barriers outside the Houses of Parliament and that there are a number of injured.

Police said that the driver of car, a man, was arrested at scene after the incident which took place at 7:37 a.m. Tuesday in London.

No other details were immediately available, but Metropolitan Police said on Twitter that they will issue more information when they have it.