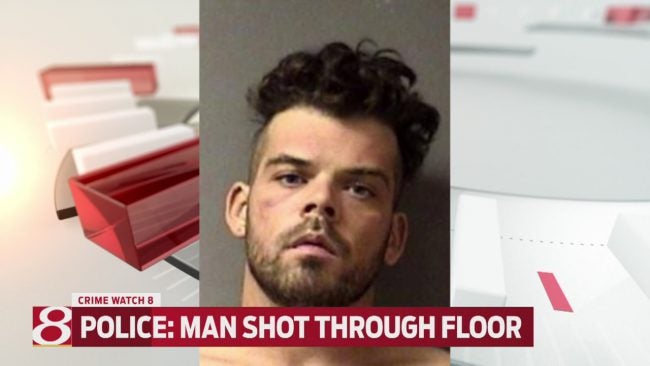 ALEXANDRIA, Ind. (WISH) – A woman is recovering after police said her upstairs neighbor shot her through his floor.

It happened on Thanksgiving morning in an apartment building on Madison Street in Alexandria. Police arrested Sean Fesmire for criminal recklessness.

The woman who was struck answered the door Tuesday and said she was too rattled for an interview.

McIntyre said he woke up around 2:30 Thanksgiving morning to the sound of gunshots.

“We’re only, maybe four inches of a wall separating us from where he was shooting,” McIntyre said. “It could have just as easily been him aiming at the wall.”

McIntyre now knows the bullets ended up in the apartment below Fesmire’s.

A police report said a man and a woman living below Fesmire told police they invited him over for dinner.

The woman said she woke up minutes later to pain and later realized she’d been shot. She told police her roommate pulled her out of the room and called 911.

“He was down having dinner with them right before he shot,” McIntyre said. “That’s cold, in my eyes. That’s really cold.”

Officer said they arrested Fesmire that morning and found 17 bullet holes in his floor. Police said they found a shotgun and a long rifle that they believe Fesmire used to cause the bullet holes.

Fesmire has two prior convictions for criminal recklessness and cannot legally own guns.

“I moved to a small town because I was afraid of violence,” McIntyre said. “I don’t think he should be out and have the ability to do this to another family.”

Police said Fesmire did not answer their questions and instead requested a lawyer.