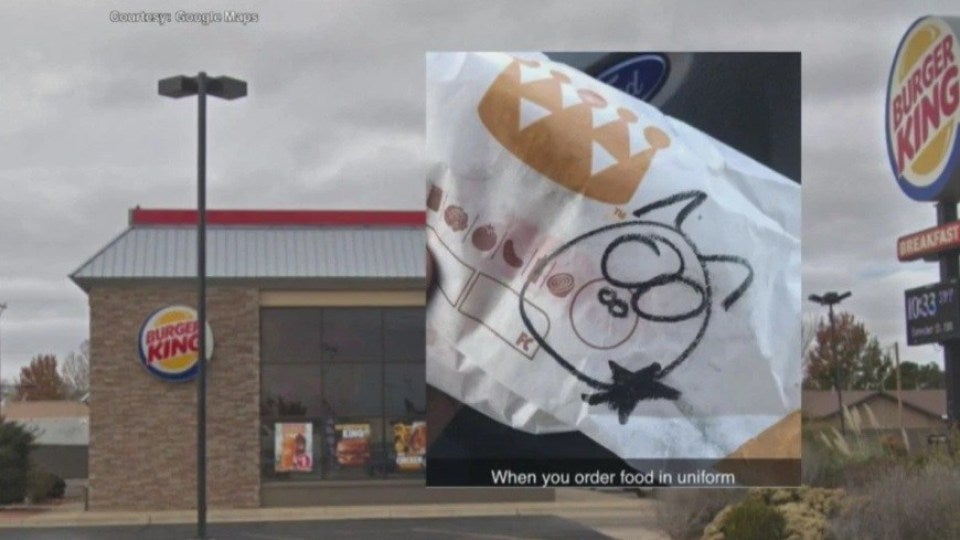 ALBUQUERQUE, N.M. (KRQE) – A New Mexico police officer got an unwelcome addition with his fast-food order. The officer took a picture of what he got when he ordered a burger at the Burger King in Clovis, New Mexico. That picture has now gone viral.

Officer Timo Rosenthal was in uniform on his dinner break when he stopped for a bite to eat. Burger King says it’s identified those responsible.

“This is totally wrong and it’s not the way New Mexico should ever be,” a New Mexico man said.

Drawn on the wrapper of a Clovis police officer’s burger, was a pig.

Thursday afternoon at Burger King, Officer Timo Rosenthol says he was in uniform when he ordered his meal. He was shocked at the drawing on the wrapper, and on top of that, he says the patties were burned and the burger was of very poor quality.

“They’re depicting a pig in the drawing, that’s derogatory,” a woman said.

People are reacting on Facebook, saying, “I bet if you ran a check on everyone who laughed at this post, you’d find a ton of arrest warrants,” and, “I’m so sorry that happened in my state. Thank you for your service.”

“I think that was excellent. Fire them on the spot,” the woman said.

Still, Officer Rosenthal says he won’t be going back. In a statement, the VP of Burger King in Clovis says the franchise does not support that kind of treatment against anyone, especially law enforcement.

The Clovis Police Chief said he is disappointed that any of his officers are treated in a disrespectful and derogatory way.