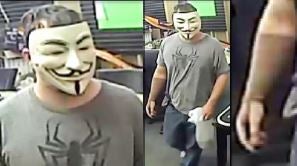 INDIANAPOLIS (WISH) – The Indianapolis Metropolitan Police Department is looking for a man wanted for robbery.

According to Crime Stoppers, on August 23 at 3:45 p.m., a white male wearing a mask entered Boost Mobile located at 2602 South Madison Avenue. Police said when he walked in he demanded money, then ordered the victim to the back room where he took three Galaxy 5 cell phones. The suspect then fled on foot.

The suspect is described as the following:

Police said the handle of a gun was seen sticking out of his waist band.