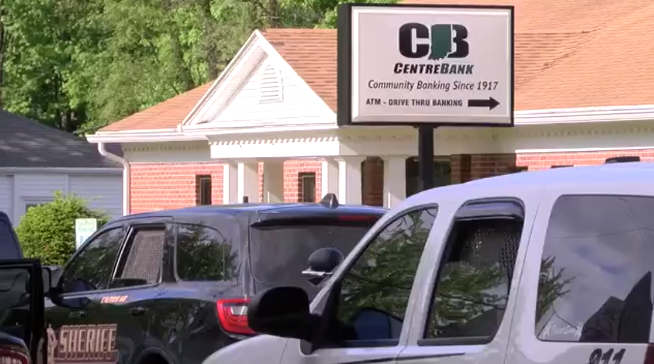 HILLSBORO, Ind. (WLFI) — Police are looking for the man responsible for a bank robbery in Hillsboro Friday just before 5:00 p.m.

The suspect description given by the Fountain County Sheriff’s Office and Indiana State Police is a man around 6 feet tall. They said he was wearing a construction vest, hard hat and a mask.

All of their information came from the one witness and the bank employees who were inside when it happened. They said the man told the teller he had a gun but never showed one, he did get away with some cash.

Jay Estes was working at Myer’s Dinner Theater in Hillsboro when he heard the Centre Bank across the street had been robbed.

“I’ve lived here for 18 years and we’ve never had anything like this,” said Estes. “I talk to the teller that was robbed everyday because I take the deposits over and I know she’s shook up and I can’t talk to her right now and that bothers me.”

He’s not the only one bothered by the incident.

“Yeah it was very shocking in a small community you know, we know we’re susceptible to it but not usually in your backyard,” said Fountain County Sheriff Terry Holt.

Holt believes the size of the town could be an advantage in this situation.

“It might go unsolved for a while but a lot of times people start talking and I’m hoping that’s what happens here.”

Estes has already seen evidence of that.

Holt said that will be a huge help but that’s not all law enforcement is banking on.

“We tracked for just a little bit but because it was a hard surface the dogs have a hard time picking up a scent, we’re interviewing people we’ve got state police on scene, we have a state police detective on scene looking for finger prints and taking pictures,” said Sheriff Holt.

Holt hopes the large police presence in the small town sends a message, but just in case Estes has this one on behalf of Hillsboro.

“Don’t do this in our town because we will find you one way or another,” said Estes.

No one was hurt during the robbery. If you have any information, you’re asked to call the Fountain County Sheriff’s Office or Indiana State Police.