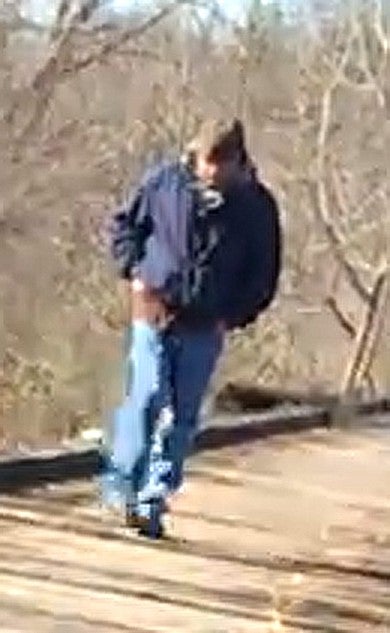 Investigators with the Carroll County Sheriff’s Office and Indiana State Police confirmed the identities on Wednesday afternoon. The organizations are working the case as a double homicide. A suspect or suspects has not been named.

ISP provided a photo of a person who was walking the trail around the time Williams and German were walking. Authorities are asking for assistance in identifying him.

“We’re going to get to the bottom of this, we feel confident,” said Carroll County Sheriff Tobe Leazenby.

Investigators set up a command post at the Delphi Fire Department Tuesday. More than 25 investigators are looking into the case. Officials say hundreds of tips have been submitted after they went missing Monday afternoon.

Indiana State Police Sgt. Kim Riley said the bodies were found about three-quarters of a mile east of Delphi around 12:15 p.m. on Tuesday.

Investigators said no further information regarding the cause of death will be released. Anyone with information or if they were in the area of the Monon High Bridge or Delphi Historic Trails are asked to come forward.

The bodies were discovered along Deer Creek near Delphi, about 60 miles northwest of Indianapolis and about three-quarters of a mile from an abandoned railroad bridge where the two girls were dropped off Monday to go hiking. They were reported missing hours later after they did not appear at a predetermined meeting place.

The superintendent for Delphi Community School said counseling services for students will be available throughout the district.