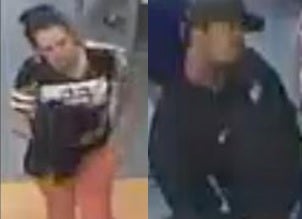 The Indianapolis Metropolitan Police Department said the suspect’s attempted to use the stolen card at Champs on May 21.

The victim’s card had been previously stolen in a home invasion just hours beforehand.

Surveillance cameras at the mall caught these images of a man and a woman. Police said the card had been used at several locations prior to being deactivated.

Two men are suspected in the home invasion. They are described by IMPD as two black males, around 25 years old, and weighing between 200 and 220 pounds. One of them was armed with a handgun.