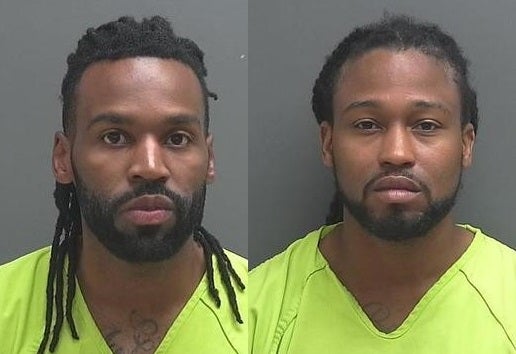 Driver Corey Carter, 32, and passenger, Keith Williams, 31, were in a black pickup traveling 105 mph on Interstate 69 at the 76-mile marker when state police troopers Ross Johnson and Beau Brumett pursued at 7:20 p.m. Saturday. The troopers said they stopped the truck about a mile away.

While speaking with Carter and Williams, the troopers smelled burnt marijuana.

“A search of the truck revealed marijuana and a loaded handgun that was within reach of Williams,” said a news release issued Sunday by state police. “Troopers learned that both items belonged to Williams; however, Williams did not have a valid permit to possess the gun.

“Troopers also found that Williams was wanted on an active arrest warrant through Marion County, Indiana for operating a vehicle while intoxicated.”

Carter and Williams were placed into custody and taken to the Daviess County Jail in Washington, Indiana. Carter was jailed on a reckless driving charge and on a felony charge of maintaining a common nuisance. Williams was jailed on a misdemeanor charges of possessing marijuana, visiting a common nuisance and having a handgun without a valid permit, and on an arrest warrant through Marion County.