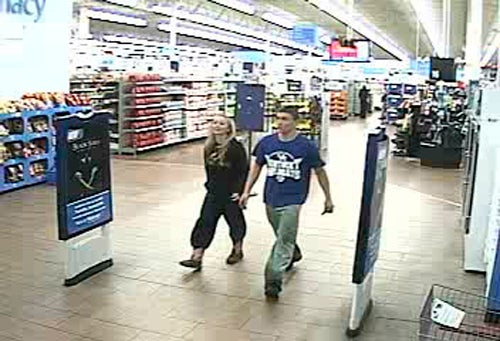 LEITCHFIELD, Ky. (AP) – Police say unless they surrender, the “outcome is not going to be good” for two teenage sweethearts who have blazed a trail of crime across the South, leaving in their wake a string of stolen vehicles and pilfered checks while stirring concern about their increasingly bold behavior.

The 18-year-old and his 13-year-old girlfriend – who had apparently convinced the boy and his family that she was 19 – have so far eluded capture and are now believed to be cruising around in a stolen truck with two guns.

“There’s going to come a time when we’re not going to see him as an 18-year-old kid,” said Norman Chaffins, sheriff in Grayson County, Kentucky, where the pair disappeared nearly two weeks ago.

“We’re going to see him as someone who’s stolen three vehicles with two handguns in them, and the outcome is not going to be good for either one of them if they don’t turn themselves in.”

Dalton Hayes and Cheyenne Phillips vanished Jan. 3 from their small hometown in western Kentucky, the sheriff said. Since then, authorities believe the two have traveled to South Carolina and Georgia.

Hayes’ mother urged the young couple to surrender and “face the consequences.”

“I pretty much cry myself to sleep every night worrying about where they are and if a police officer or any random individual tries to pull them over and isn’t so nice and hurts them,” Tammy Martin said.

The couple had been dating for about three months. The girl portrayed herself as being 19, and the family, including Martin’s son, believed her, she said.

Cheyenne “would go in and write checks, and she would come out with cigarettes and stuff, so I didn’t have any reason not to believe she wasn’t 19. Because normally you can’t buy cigarettes when you’re 13 years old,” Martin said.

By the time her son realized she was a mere 13, “he was already done in love with her,” Martin said.

When he hit the road, Hayes was running away from trouble back home. He faces burglary and theft charges in his home county, stemming from an arrest late last year, according to Grayson County court records.

He was planning to be at the local judicial center on Jan. 5 to find out if a grand jury had indicted him on the charges, his mother said. His case did not come up, but by that time the teens were gone.

The sheriff said the couple’s behavior is “becoming increasingly brazen and dangerous.”

“They’re going on people’s property,” he said. “They’re forging checks to get money. … They could have stopped in Kentucky, but they didn’t.”

Since they have no source of money, he added, “they’re going to get desperate.”

Twice, the teens were able to evade law officers in Kentucky, the sheriff said. They crashed the first truck they stole and hid in the woods. Then they later stole another truck nearby, Chaffins said.

Chaffins said he believes Hayes – who had run-ins with the law as a juvenile – is calling the shots as the teens try to stay ahead of police.

The two were spotted Monday at a Wal-Mart in South Carolina, where the teens are thought to have passed two stolen checks, said Manning, South Carolina, Police Chief Blair Shaffer. They were seen in a vehicle that apparently was stolen from Kentucky, he said.

Authorities believe they then headed to Georgia and stole a pickup truck from the driveway of a man’s home in Henry County, about 30 miles southeast of Atlanta. The homeowner awoke Wednesday to find his vehicle was gone, along with two handguns he kept inside, Henry County police Lt. Joey Smith said Friday.

Hours later, another truck the couple is suspected of having stolen in another state was found nearby. It had been crashed through a fence and abandoned behind a vacant building on neighboring property, Smith said.

Martin said her son texted her a few days after their disappearance to say the couple was in Mississippi. They were spotted soon after that in Kentucky, she said.

“He was just trying to throw me off,” she said. “I’m sure he thought that I would call the police and tell them where he was.”

Chaffins said the situation is getting more serious as time passes, he said.

“This is not a game to us,” Chaffins said. “Our biggest fear is that Dalton is not going to stop for the police. He’s going to run every time they approach him.”