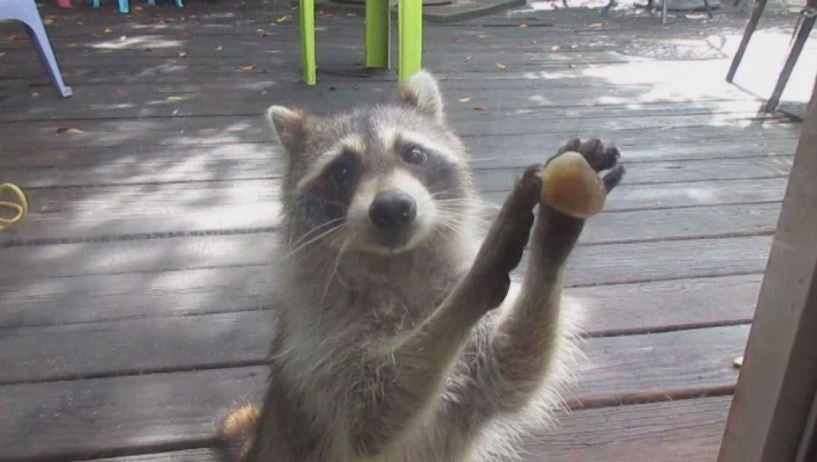 SARASOTA, Fla. (WFLA) – A furry, annoying neighbor has now become a viral sensation. Rocksy the raccoon visits a Sarasota woman every day, politely asking for food in the only way it knows how — by knocking incessantly on her glass door. And now nearly two million people have watched.

Susie Chinn says it started happening nine months ago. A raccoon would come by and eat the food Chinn left for her cats. But one day Chinn heard a knocking sound. When she walked toward her back room, she saw the raccoon had grabbed a rock and used it to knock on the door.

The animal has been doing it every day since and Chinn has named her Rocksy. Chinn said, “She’ll do it for hours. She’ll sit there for two or three hours, and I don’t give her a dang thing, she’ll just sit there.”

And Rocksy is persistent. Sometimes Chinn can’t take the incessant knocking. She said, “I’ll take her rock and then I’ll throw it into the garden and within a couple of minutes she’ll get another one and then she’ll come back and just keeps doing it.”

Chinn shot a video to share with friends, and now it’s been seen by millions around the world. The glass doors are in need of repair, and the noise may be nuisance, but Chinn sees Rocksy as a friend.

Chinn said, “The noise sometimes drives me crazy but I look forward to her every day and actually there’s been a couple of times where she’s been late getting here and I worry about her.”

Chinn hopes this viral video can send a message that people should not kill or mistreat wild animals. She said, “I’m hoping that people will learn from this and just respect animals and love them because we all have a reason to be here.”

The video is cute, but it’s important to emphasize that you should never feed a wild raccoon. If you do, the animals can become comfortable around humans and spread disease.