Biden returns to Georgia as validator for Ossoff, Warnock 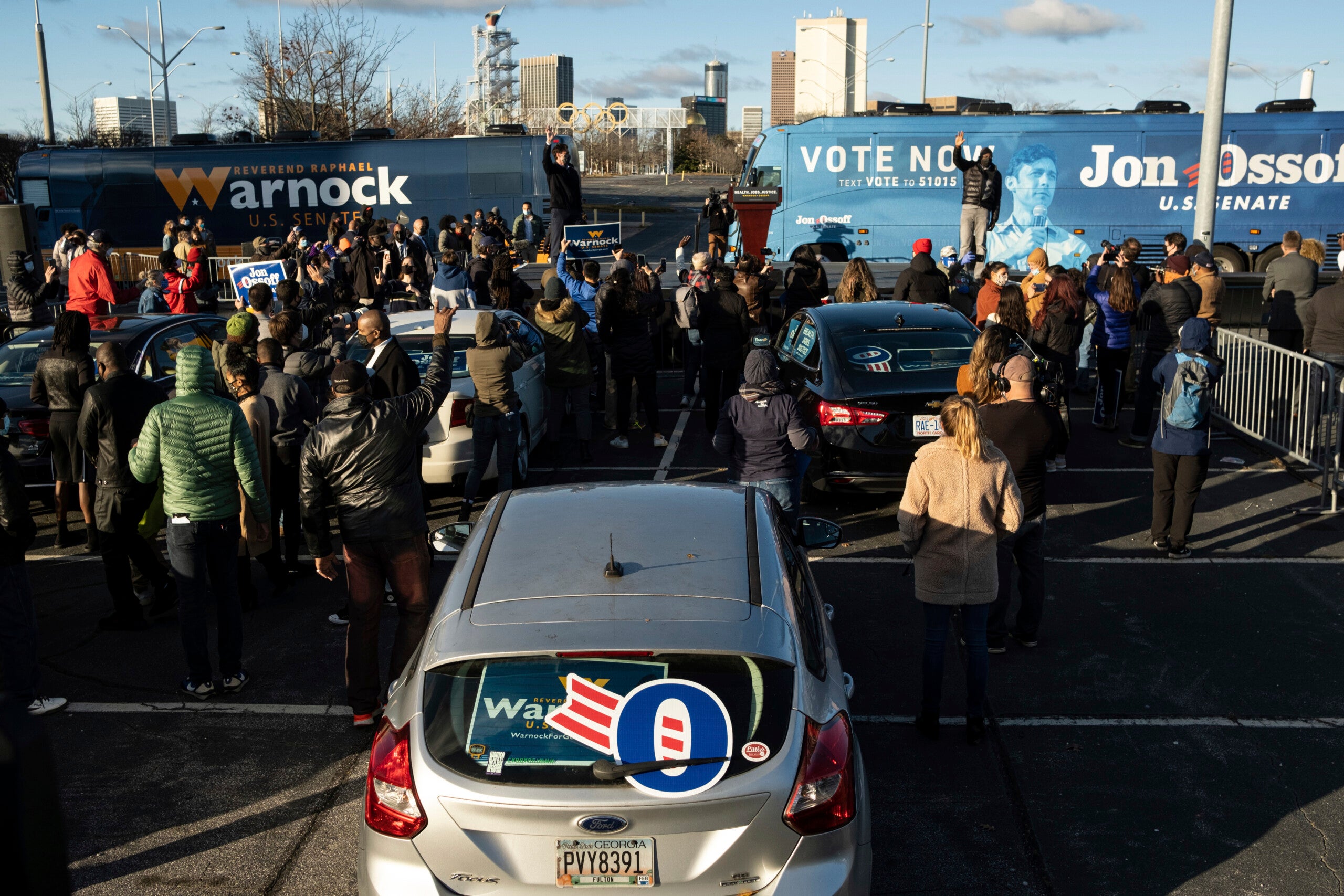 ATLANTA (AP) — Republicans eager to cement GOP control of the U.S. Senate have branded Georgia’s Democratic candidates as puppets who would ensure a leftist takeover of the federal government if Sens. David Perdue and Kelly Loeffler aren’t reelected.

Democrats believe they have a helpful counter to the exaggerated attacks on Jon Ossoff and Raphael Warnock: President-elect Joe Biden, fresh off the Electoral College confirming his victory.

The first Democratic presidential candidate to win Georgia since 1992, Biden will return to the state Tuesday to campaign alongside Ossoff and Warnock ahead of the Jan. 5 runoff elections. The runoffs will determine which party controls the Senate and shape the legislative ambitions of Biden’s presidency.

They also will serve as an early test of Biden’s power as president-elect while President Donald Trump continues to fight the election results by falsely claiming widespread voter fraud — even though election officials across the country, including Republican leaders in Georgia, have confirmed the election was not marred by fraud.

Democrats see Biden, who campaigned as a mainstream unifying figure, as well suited to make his party’s case in Georgia, an emerging battleground where a Democratic victory statewide still requires plenty of support from moderates — and perhaps even Republican-leaning independents.

“The president-elect can motivate our base but also what we call the Biden coalition,” said Tharon Johnson, previously a senior adviser to Biden’s Georgia campaign. “That means the progressives, the liberals, the moderates — and I’d add some suburban Republicans and even some rural voters who might have gotten away from us before.”

Biden’s joint rally with Ossoff and Warnock comes on the second day of early voting in Georgia and a day after the Electoral College cemented Biden’s victory over Trump, who has spent weeks telling his supporters that the election was rigged. Both parties see the Georgia contests as coin flips and have invested staggering sums that reflect the stakes.

A Biden aide said the president-elect will make a direct appeal to Georgians about what Senate control means, especially given the death toll and economic fallout from the surging coronavirus pandemic. Biden argues for sweeping new economic aid for businesses, individuals and state and local governments as COVID-19 cases rise, but Congress remains at an impasse. The aide spoke ahead of Biden’s remarks on condition of anonymity.

Biden’s campaign, together with the Democratic National Committee, has steered about $5 million to Democrats’ coordinated campaign in Georgia. The money is paying for about 50 campaign staffers, including many focused on suburbs and smaller cities where Biden surpassed usual Democratic tallies. The Biden campaign and the national party also have raised about $10 million directly for Ossoff and Warnock.

But Biden’s biggest impact could be vouching for Ossoff and Warnock. The general election results show why the two could benefit from riding Biden’s coattails.

Biden topped all candidates on Georgia’s November ballot with nearly 2,475,000 votes, finishing about 12,000 ahead of Trump out of 5 million ballots cast. Perdue finished with about the same number of votes as Trump and led Ossoff by about 88,000 votes, meaning Ossoff ran about 100,000 votes behind Biden.

Warnock and Loeffler, meanwhile, led a special election that included more than 20 candidates. But both finished well behind their respective parties’ statewide pace. The runoffs are necessary because none of the Senate candidates surpassed the 50% threshold required to win statewide offices in Georgia.

The record general election turnout — about 850,000 more presidential votes than in 2016 — demonstrated considerable enthusiasm across the spectrum. And, certainly, Democrats’ decade-long organizing efforts in Georgia, especially in the booming metropolitan areas around Atlanta, paid off. But the gap between Biden and Ossoff suggests Biden’s margin depended at least partly on moderates and even some conservatives, especially in the Atlanta suburbs, who simply did not like Trump. Republicans believe those kinds of voters are primed to back Perdue and Loeffler in the runoff.

Republicans need just one more seat for a Senate majority. Democrats must sweep the runoff elections to get a 50-50 Senate and make Vice President-elect Kamala Harris the tiebreaking vote.

Georgia Democratic chair Nikema Williams, a congresswoman-elect from Atlanta, pushed back on the idea that Ossoff and Warnock need Biden to have a path to victory. She framed the contests more about the distinctions between a Democratic and Republican Senate.

“I welcome my president-elect to Georgia,” Williams said, but “it’s not about appealing to one segment of voters.” Instead, she argued, the runoffs and Biden’s visit are about “appealing to all Georgians who want to see something different” on the pandemic response.

Johnson, who worked on the Biden campaign, said it’s impossible to separate those issues from Biden himself.

In Biden’s fall campaign, Johnson said, “our first goal was to not let them label him as this left-wing, radical socialist.” Now that he’s won, Johnson said, “Who better to explain exactly what these Senate seats mean and why he needs them to get things done?”

Warnock and Ossoff have scoffed at the “socialist” labels from Republicans. Perdue and Loeffler have claimed falsely that the two Democrats support single-payer health insurance that would abolish private health insurance and want to “defund the police.”

But because Ossoff and Warnock have never held public office and are still building their brands, it’s harder for them to offer the kind of retort Biden made in August as Trump was hammering him as a leftist.

“Ask yourself,” Biden said, “do I look like a radical socialist with a soft spot for rioters? Really?”

Even some Republicans acknowledge the dynamics make Biden the ideal validator.

“He’s a known quantity,” said Republican Jack Kingston, a former congressman and Trump ally. “Voters know him, or even if they don’t really know him, they say, ’Oh, Joe Biden. He’s been there a long time, hasn’t he?”

Kingston noted Georgia’s population growth and demographic shifts have favored Democrats, giving the party a larger liberal, urbanized base than it had just a decade ago. Biden, he said, knows how to tap that base without angering the middle.