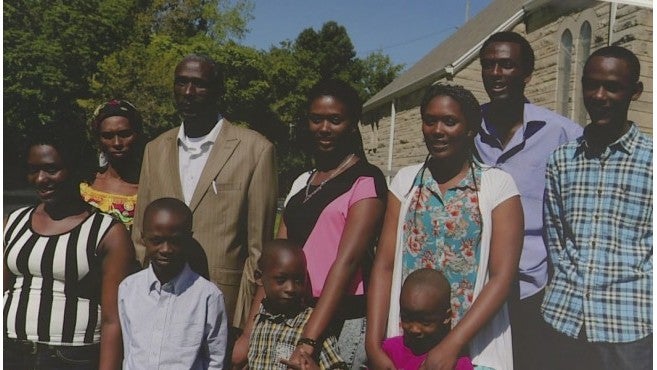 President-elect Joe Biden, meanwhile, has pledged to set the annual refugee admissions cap at 125,000. But first, his team will have to contend with the damage left behind.

The refugee cap, which dictates how many refugees may be admitted to the U.S., must be approved by the president. But where the cap has often been viewed as a goal to be reached, the actual number of refugees admitted has fallen short under the Trump administration.

“The program that this incoming administration is inheriting is on its last breath,” said Danielle Grigsby, director of policy and practice at Refugee Council USA. “It’s going to require both political will and an early investment in overturning policies to see the program begin to operate as it can and is intended to.”

On Tuesday, transition officials reiterated Biden’s commitment to restoring the U.S. immigration system but cautioned that it would take time, given the abundance of policy changes over the last four years.

“The infrastructure within the government, as well as the infrastructure in the NGO community, has been very badly affected by the last four years, so we’re assessing that in order to figure out how quickly the administration can move,” a transition official told reporters during a Tuesday press call.

“It’s an enormous challenge, really, because the current administration broke so many things,” the official said.

Biden echoed that during his year-end speech Tuesday, saying he’ll keep to his promises but it will take time, particularly with policies relating to the U.S.-Mexico border.

“It will get done and it will get done quickly. But it’s not going to be able to be done on day one, lift every restriction that exists,” Biden said.

Building up refugee admissions has been a focus between the Biden transition team and the Department of Homeland Security, which plays a role in the process, according to a source familiar with the discussions, who noted that the team is assessing what needs to be fixed to eventually hit Biden’s goal.

Asked if the Biden administration would endeavor to set that cap in fiscal year 2021, a transition official said it’s “early to say,” adding that it “depends on the state of the infrastructure, which is something we’re determining.”

Acting Homeland Security Secretary Chad Wolf said Monday that his department is providing information to the Biden-Harris transition team, adding that the process is “going as well as it can go,” during a Heritage Foundation event.

How the cap is set

Each year, the administration sets a limit on how many refugees may be admitted to the U.S. Historically, the number of admissions has fluctuated according to world events, though it’s generally been high. From fiscal years 1990 to 1995, for example, many refugees arriving in the U.S. were from the former Soviet Union, according to the Pew Research Center.

Barbara Strack, former chief of the Refugee Affairs Division at U.S. Citizenship and Immigration Services, was involved in the push to increase the cap and cautioned that rebuilding the program will take time. Even so, signaling an intent to drive up arrivals is significant, Strack argued.

“I still think it’s very worthwhile for the administration to share that goal publicly because it lets the State Department, USCIS and [the Office of Refugee Resettlement] to start building that level,” she said. “It gives everyone their marching orders on what to build toward.”

Hiring will likely be a critical component for a Biden administration, as it tries to ramp up interviews of refugees. The diversion of refugee officers to work on asylum cases the past two years has left the pipeline largely void of refugees who are advanced in the system, a source familiar with the process said. But there are also challenges that arise with Covid-19, including USCIS interview teams being unable to travel.

The dwindling of the refugee ceiling under Trump has also had ripple effects in the U.S. resettlement process, particularly for agencies tasked with helping refugees get set up.

Resettlement agencies help place refugees once they’ve been admitted to the U.S., introducing them to services, helping them get jobs and familiarizing them with new communities. In some cases, the help that offices provide can be as simple as showing individuals the local bus route or teaching them how to use the financial system.

Over the last two years, agencies have had to make adjustments like closing offices or pausing their placement programs, including Catholic Charities of Dallas.

That group has been resettling refugees for more than 40 years. Toward the end of the Obama administration, the organization resettled nearly 1,000 refugees in a year, according to Dave Woodyard, CEO of Catholic Charities of Dallas. It resettled only three unaccompanied refugee children this year. The last adult arrival was in December 2018.

The drastic decline in arrivals resulted in an 80% reduction in staff on the resettlement team. “You lose languages, you lose dialect, you lose understanding,” Woodyard said. “They’ve been through a very difficult process.”

Woodyard expressed confidence that Catholic Charities could build up again to accommodate an increase in refugee arrivals.

“All the hurdles and intentional roadblocks that the administration put in place are the reason that this program is where it’s at,” Grigsby added.

She outlined a series of steps that organizations are hoping the incoming administration takes, including immediately increasing the current fiscal year’s cap, allowing for referrals from the United Nation refugee agency and restoring allocations based on vulnerability, among others.

Ashley Feasley, director of policy at the U.S. Conference of Catholic Bishops, a refugee resettlement agency, said her organization is advocating that the Biden team appoint a senior-level White House coordinator ​to coordinate federal agencies and other stakeholders around rebuilding the U.S. refugee admissions program.

The ambition to significantly increase the refugee ceiling will require patience, transition officials indicated Tuesday. But the commitment alone has already inspired confidence among groups quickly working to revamp their own programs after years of uncertainty and to prepare for the day of more refugee arrivals.