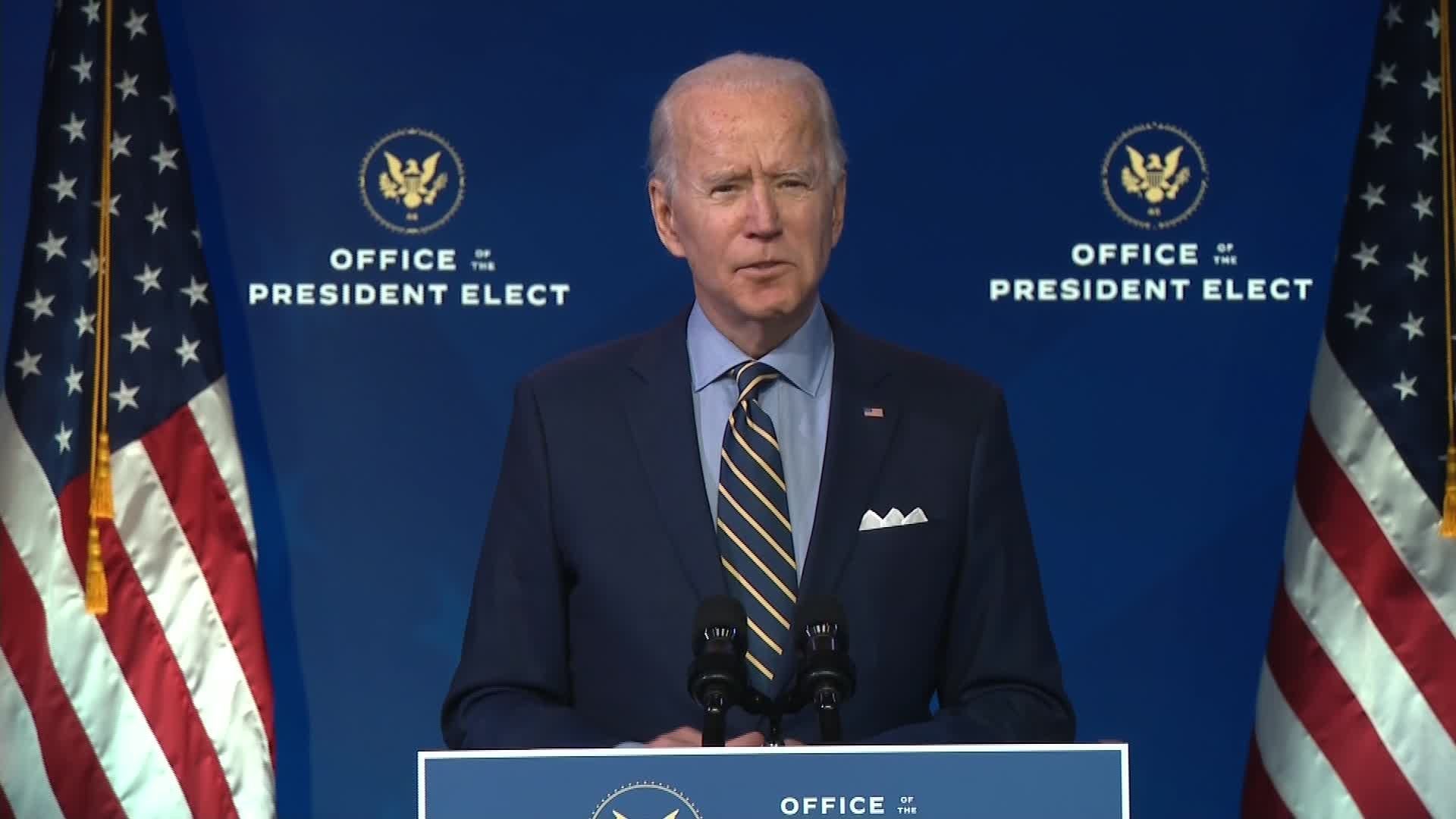 President-elect Joe Biden on Dec. 28, 2020, said his transition team has "encountered roadblocks" from political leadership at the Defense Department and the Office of Management and Budget as his advisers work with the Trump administration. (Photo from Pool Coverage via CNN)
by: Kate Sullivan and MJ Lee, CNN
Posted: Dec 28, 2020 / 12:53 PM EST / Updated: Dec 28, 2020 / 07:15 PM EST

(CNN) — President-elect Joe Biden on Monday said his transition team has “encountered roadblocks” from political leadership at the Defense Department and the Office of Management and Budget as his advisers work with the Trump administration.

“We just aren’t getting all the information that we need from the outgoing administration in key national security areas,” Biden said, after receiving a virtual briefing from members of his national security and foreign policy agency review teams.

“It’s nothing short, in my view, of irresponsibility,” he said.

The President-elect said his team “needs a clear picture of our force posture around the world and our operations to deter our enemies. We need full visibility into the budget planning underway at the Defense Department and other agencies in order to avoid any window of confusion or catch-up that our adversaries may try to exploit.”

A Defense Department spokesperson told CNN that there are three briefings/interviews scheduled for this week with the Biden transition team. Two of the briefings pertain to coronavirus issues and the other one is on “cybersecurity.”

Acting Secretary of Defense Chris Miller defended the Pentagon’s transition work in a statement Monday, touting the department’s “164 interviews with over 400 officials” and saying the agency has “provided over 5,000 pages of documents — far more than initially requested by Biden’s transition team.”

“DoD’s efforts already surpass those of recent administrations with over three weeks to go and we continue to schedule additional meetings for the remainder of the transition and answer any and all requests for information in our purview,” Miller said.

Tensions between the Pentagon and the Biden transition team have been intensifying in recent weeks over stalled transition briefings.

Last week, Biden said that the Defense Department had refused to brief his team on the massive cyberattack on government agencies and major American technology and accounting companies. The week prior, Biden’s transition team said they had not agreed to a two-week break in the discussions with Pentagon officials, despite the acting defense secretary saying that both sides had agreed to take a “holiday pause.”

A transition official told CNN that the Defense Department continues to “deny and delay” meetings with agency review team members.

“There has been no substantial progress since transition officials spoke to the intransigence of the Department’s political leadership earlier this month,” the official said. “As the President-elect alluded to, no Department is more pivotal to our national security than the Department of Defense, and an unwillingness to work together could have consequences well beyond January 20.”

Biden said there are a number of pressing national security issues his administration is preparing to tackle when he takes office next month, including the coronavirus pandemic, the climate crisis and the humanitarian crisis at the US southern border. He reiterated his pledge to sharply depart from President Donald Trump’s isolationist foreign policy and instead rebuild alliances across the globe and work with partners to tackle global issues.

“We’re going to have to regain the trust and confidence of a world that has begun to find ways to work around us or work without us,” Biden said.

The President-elect said part of the discussion in the briefing earlier in the day focused on strategic challenges that China and Russia pose to the United States. He spoke about “modernizing our defense priorities to better deter aggression in the future, rather than continuing to overinvest in legacy systems designed to address threats of the past.”

Biden echoed his comments last week calling the recent cyberattack on US federal agencies and companies a grave risk to US national security. Trump, by contrast, downplayed the attack and contradicted Secretary of State Mike Pompeo’s public remarks linking the hack to Russia.

Biden spoke about building coalitions to compete with China and hold the country’s government accountable “for its trade abuses, technology, human rights and other fronts.”

The President-elect also focused on the humanitarian crisis at the US southern border and processing asylum seekers.

“We will institute humane and orderly responses. That means rebuilding the capacity we need to safely and quickly process asylum seekers, without creating a near-term crisis in the midst of this deadly pandemic,” Biden said.

Trump’s administration has taken steps to make it harder for people to claim asylum in the US throughout his presidency.

Biden spoke about mass distributing authorized COVID-19 vaccines, and said his administration would use the full powers of the Federal Emergency Management Agency to combat the virus.

“Many of the agencies that are critical to our security have incurred enormous damage,” Biden said. “Many of them have been hollowed out in personnel, capacity and in morale.”

“All of it makes it harder for our government to protect the American people, to defend our vital interests in a world where threats are constantly evolving and our adversaries are constantly adapting,” the President-elect said.

Biden praised career officials in government departments, and said that his team had received “exemplary cooperation” from some agencies.

A transition official previously told CNN that the briefing Biden received would focus in large part on the findings of the review teams since the delayed beginning of the formal transition process, and that Biden’s remarks would serve as a broad overview of some of those key points.

The briefing was expected to be less about specific headlines in the news, and focus more broadly on the country’s institutional health and wellness on the national security and foreign policy fronts.

Biden also condemned the bombing on Christmas morning in Nashville. The blast injured at least eight people and damaged more than 40 buildings, and the bomber was found dead.

“This bombing was a reminder of the destructive power of an individual or a small group can muster and the need for continuing vigilance across the board,” Biden said, speaking from Wilmington, Delaware. He thanked the police officers who evacuated the area and first responders on the scene.

Trump had not commented publicly on the explosion in Nashville as of Monday afternoon, but the White House said in a news release last week that he had been briefed on the incident.

Biden has vowed to take a markedly different approach to governing than Trump, particularly when it comes to foreign policy.

He has vowed to undo Trump’s “America First” isolationist foreign policy and restore the United States’ reputation on the world stage. Biden has pledged to rebuild international alliances and has said that global challenges, including the coronavirus pandemic and the climate crisis, require partnerships and international coordination.

Trump, by contrast, has denigrated and questioned several of the US’s longstanding alliances, including with NATO, and pulled the US out of various international bodies and treaties. Trump has withdrawn the US from the Paris climate accord, the Iran nuclear deal and the World Health Organization and other international pacts.

Biden will inherit a number of pressing challenges when he is sworn in next month as president, chief among them the coronavirus pandemic, which has killed more than 334,000 Americans as of Monday afternoon.

The President-elect has named several top members of his foreign policy and national security teams, including his longtime foreign policy adviser Antony Blinken as his nominee for secretary of state. Biden has selected retired Army Gen. Lloyd Austin, the former commander of US Central Command, to be his secretary of defense.

He also named Avril Haines, a former top CIA official and deputy national security adviser, as his pick for director of national intelligence, and Alejandro Mayorkas, a former deputy secretary of the Department of Homeland Security, to lead DHS. Haines would be the first woman to lead the US intelligence community and Mayorkas would be first Latino to helm the Department of Homeland Security.

This story has been updated with more reporting.