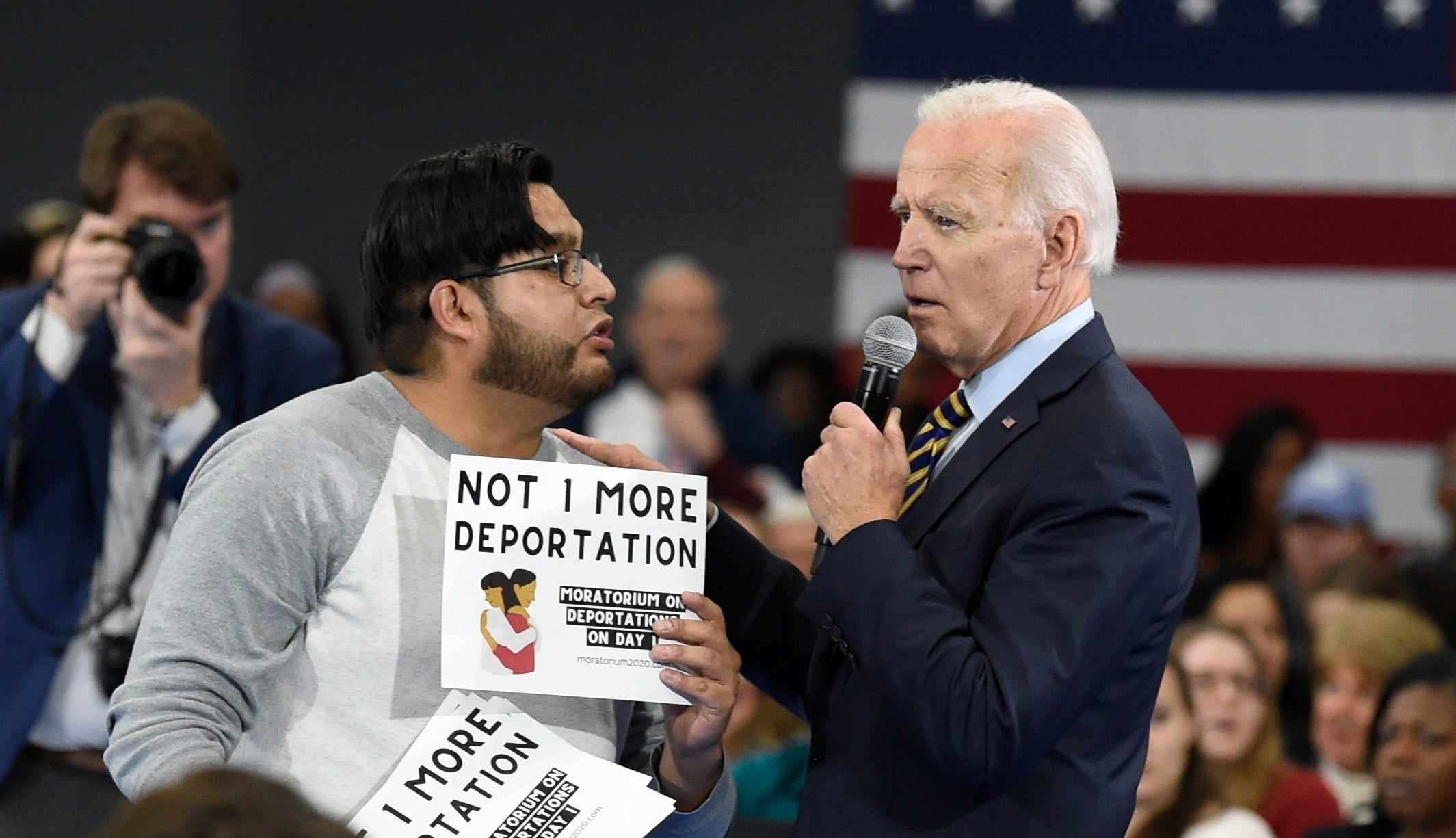 Democratic presidential hopeful Joe Biden talks with a protester objecting to his stance on deportations during a town hall at Lander University in Greenwood, S.C., on Thursday, Nov. 21, 2019. President Joe Biden's administration has deported hundreds of people in its first days in office despite the president's campaign pledge to halt most deportations at the beginning of his term. It’s unclear how many of the people deported in recent days are considered national security or public safety threats or recently crossed the border illegally, as prescribed by new guidance issued by Biden’s Department of Homeland Security to enforcement agencies. That guidance went into effect Monday, Feb. 1, 2021. (AP Photo/Meg Kinnard, file)
by: ELLIOT SPAGAT and JOSH BOAK Associated Press
Posted: Feb 2, 2021 / 05:02 PM EST / Updated: Feb 2, 2021 / 05:02 PM EST

WASHINGTON (AP) — With a second wave of splashy announcements to undo his predecessor’s immigration policies, President Joe Biden showed where he sees perils and limitations.

His orders Tuesday on family separation, border security and legal immigration bring to nine the number of executive actions on immigration during his first two weeks in office. With proposed legislation to give legal status and a path to citizenship to all of the estimated 11 million people in the country who don’t have it, Biden has quickly taken aim at many of former President Donald Trump’s sweeping changes to deter immigration, both legal and illegal, and established a vision that is likely to far outlast his tenure if he’s able to muster enough support in a deeply divided Congress.

The latest batch of orders are light on immediate changes, though White House spokeswoman Jen Psaki said Biden will have more to share in the future and shifts will take time.

Alejandro Mayorkas, whose nomination as Homeland Security secretary was confirmed Tuesday by the Senate, will lead a task force on family separation, focused largely on reuniting parents and children who remain apart. It is unclear exactly how many, but about 5,500 children have been identified in court documents as having been separated during Trump’s presidency, including about 600 whose parents have yet to be found by a court-appointed committee.

The American Civil Liberties Union, which sued to reunite families, has asked the administration for legal status in the United States for families that have been separated, as well as financial compensation for those families and attorneys at government expense. ACLU attorney Lee Gelernt said he would be “extremely disappointed” if the task force limits its scope to helping find parents of the remaining 600 children.

A review of border security will include a policy to make asylum-seekers wait in Mexican border cities for hearings in U.S. immigration court. It is a step toward fulfilling a campaign pledge to end the “Remain in Mexico” policy, known officially as Migrant Protection Protocols, which enrolled nearly 70,000 asylum-seekers since it began in January 2019.

The White House said it will also do a “top-to-bottom review of recent regulations, policies, and guidance that have set up barriers to our legal immigration system.” It will include a review of Trump’s “public charge rule,” which makes it more difficult for people who use government benefits to obtain green cards.

Esther Olavarria, deputy director of the White House Domestic Policy Council for immigration, went further last month at a U.S. Conference of Mayors meeting, saying that an executive order aimed at “restoring sanity at the U.S.-Mexico border” would end the “Remain in Mexico” policy and agreements with Guatemala, El Salvador and Honduras for the U.S. to reject asylum applicants and instead send them to those Central American countries with an opportunity to seek protection there. The asylum agreements are not explicitly mentioned in a White House statement on the orders.

Olavarria also told mayors of plans to rescind bans on people coming to the country who are deemed economic threats — an apparent reference to Trump’s proclamations to block many temporary work visas and green cards while the economy recovers from a pandemic. It was not included in Tuesday’s announcement.

The impact of executive orders that Trump issued his first week in office didn’t start to become apparent until a month later when the Homeland Security Department issued detailed enforcement priorities. His orders laid a foundation for many other of his administration’s hundreds of immigration edicts that followed.

Many changes will have to come from agencies like Homeland Security, not the White House, such as rescinding the public-charge rule, said Greg Chen, director of government relations for the American Immigration Lawyers Association.

The announcements come as Biden aides warn that Trump’s border policies that put asylum increasingly out of reach may take months to unwind — a position that has caused grumbling among some pro-immigration advocates.

Roberta Jacobson, a top Biden aide on border issues, asked Spanish-language media on Friday to discourage audiences from coming to the U.S. border. “It is not the moment,” she said in Spanish, adding that the journey was “very dangerous, and we are in the middle of creating a new system.”

Psaki reinforced that message from the White House podium on Tuesday, saying it “remains a dangerous trip” and, “This is not the time to come to the United States.”

The orders demonstrate that, just as Trump remade immigration policies from the White House, Biden can undo them with the stroke of a pen — some more easily than others. More lasting changes would have to pass Congress, a daunting job that Trump and his predecessors Barack Obama and George W. Bush failed to achieve.

In an echo of failed legislative pushes in 2007 and 2013, familiar lines of division have formed with overheated rhetoric. Stephen Miller, a top architect of Trump’s policies, said Sunday on Fox News Channel that Biden’s actions amount to the “end of all immigration enforcement in the United States of America.”

Pro-immigration groups generally applauded Biden’s latest moves, though they were more muted than the almost-giddy reception to the president’s first-day actions.

“The positive steps the administration is taking must be the beginning, not an end unto themselves,” Ali Noorani, president of the National Immigration Forum, said Tuesday. “Congress should build on these first steps to find permanent solutions to improve our immigration system.”