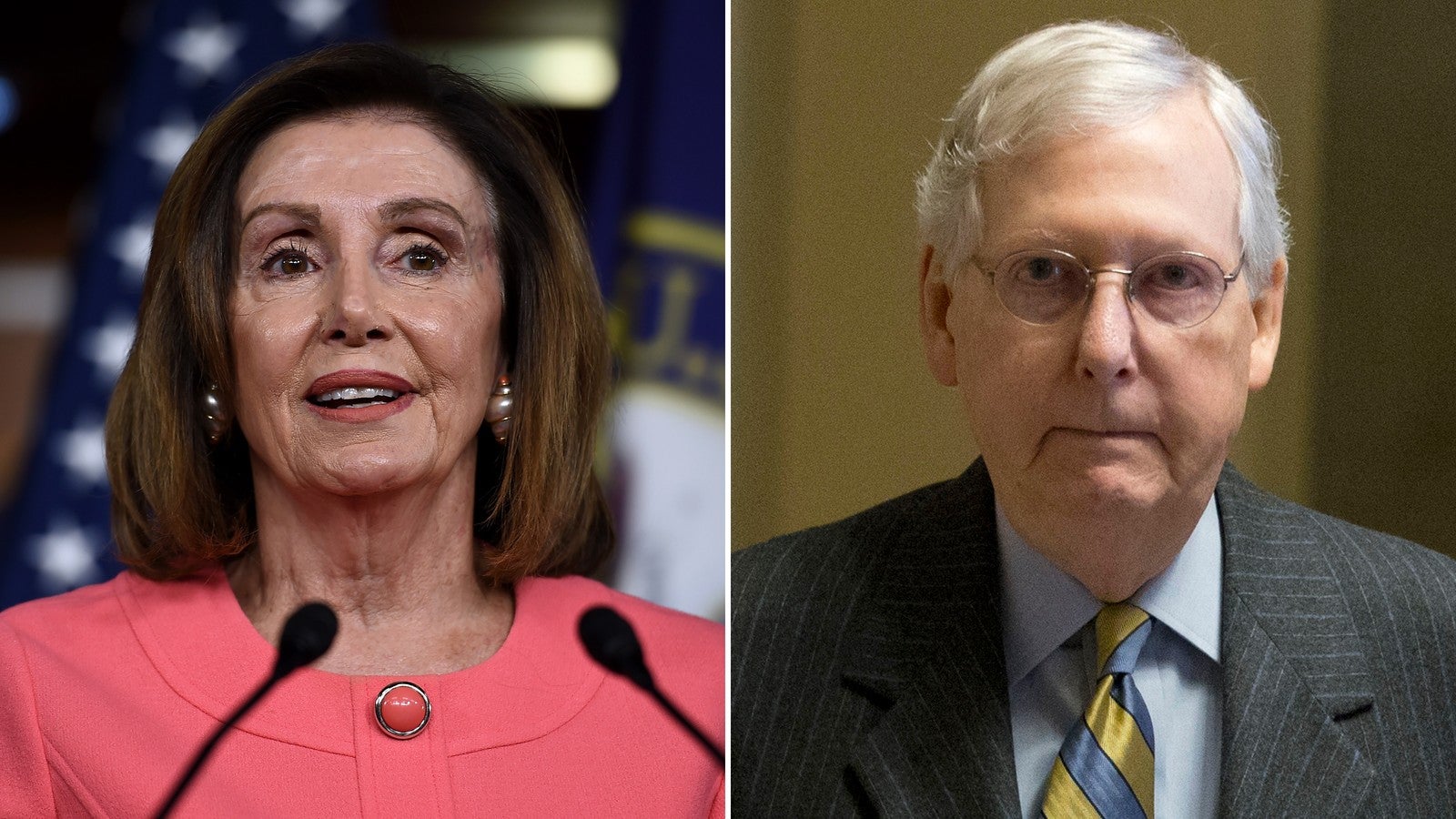 (CNN) — Top negotiators signaled on Tuesday that a bipartisan deal on a massive stimulus package to respond to the coronavirus crisis is imminent, but by early evening a final deal still had not yet been announced.

With the time slipping as senators and the White House continue to negotiate the final language of a massive economic stimulus in response to the coronavirus crisis, it’s growing increasingly unlikely that both chambers of Congress will give final approval to the plan Tuesday night as some had hoped earlier in the day.

Leaders in Congress and the Trump administration have been working for days to pass as quickly as possible a roughly $2 trillion economic stimulus package, which would include direct payments to taxpayers among hundreds of billions of dollars in other stimulus measures.

A senior Democratic aide said that it’s unlikely the House can approve the Senate deal Tuesday night. That’s because lawmakers will need time to review the details of the bill and may need to hold another conference call to discuss the elements of the Senate plan.

House Speaker Nancy Pelosi needs to ensure that her caucus is in line because they need full cooperation to bring the bill to the floor so it can be approved by either voice vote or unanimous consent — so members don’t have to return to Washington and vote in person.

Similarly, a GOP Senate aide said that with the time slipping and bill text still being drafted, it’s unlikely the Senate will vote Tuesday night.

But as economic anxiety deepens in the country, lawmakers on both sides are expressing growing ire that Congress has not moved quicker on the package.

In one sign of the impatience in the ranks, Florida Rep. Stephanie Murphy, a leader of the moderate Blue Dog coalition, sharply criticized her party’s stimulus bill during a House Democratic conference call. She contended it had “set people off” that Democrats seemed to be pushing for the Green New Deal in the emergency relief package to deal with the impact of the coronavirus, according to three sources on the call.

Murphy told Democrats on the call that she believed the party were losing the messaging in their response to the crisis, given that people are losing jobs and are desperate for help as hospitals across the country are overwhelmed.

Murphy argued that the House bill, which Democrats pushed as a roadmap of how they would respond to the crisis as negotiations to reach a bipartisan deal continue, put vulnerable Democrats in so-called frontline districts on the defensive, rather than letting them be on offensive against a GOP bill put forward earlier by Senate Majority Leader Mitch McConnell. She argued now is the wrong time to be pushing that proposal.

Murphy didn’t specify precisely what her concerns are with the bill, one of the sources said, but the stimulus bill that House Democrats put forward would not enact the Green New Deal, which would amount to a sweeping change in environmental laws pushed hard by progressives.

And after Murphy’s remarks, House Energy and Commerce Chairman Frank Pallone of New Jersey noted that the House bill asked airlines to adhere to fuel efficiency standards because they were getting massive government loans.

Pelosi didn’t respond immediately to Murphy, but later noted that she opposes the Green New Deal, something that has earned her criticism from the left.

Pelosi now is indicating she is likely to back the emerging, bipartisan stimulus deal coming out of the Senate and is unlikely to move the House’s plan, which was introduced Monday.

Murphy’s comments were a very brief part of a call that lasted roughly two hours, one of the sources said. A Murphy spokesman confirmed the account.

Objections from Democrats over accountability and process prevented legislation from advancing on Sunday and Monday in the Senate. But signs from leaders in both parties Monday night and during the day Tuesday suggested that those differences are either addressed or very close to being settled — and that a final deal could move swiftly through Congress once legislation text is unveiled.

McConnell said on Tuesday morning, “We are very close. We are close to a bill that takes our bold Republican framework, integrates further ideas from both parties and delivers huge progress.”

Pelosi similarly signaled in a series of interviews Tuesday, including with CNN, that a deal would soon be finalized.

Pelosi suggested she is hoping to avoid bringing the full House back to Washington to vote on the package, seeking to pass it through unanimous consent instead, which could allow for a vote as early as Tuesday if negotiators finalize the bill in time.

Unanimous consent is commonly used for uncontroversial measures, not for packages of such magnitude as the coronavirus stimulus, in part because any one member can block a unanimous consent request.

Signs of a breakthrough come after days of drawn out and intense negotiations between congressional Republicans, Democrats and the Trump administration.

In a move that could resolve one sticking point, Treasury Secretary Steven Mnuchin, who has been negotiating the deal, has agreed to an inspector general and congressional oversight for a $500 billion fund proposed for distressed companies, a senior White House official told CNN.

Senate Republicans initially crafted a proposal within their own conference and only later took the proposal to Democrats to negotiate, a decision that led to Democratic objections that they had been cut out of the process from the outset in a way that would slow down talks and delay a deal.

The deal aims to provide relief for Americans as well as industry hard hit by the economic fallout from the spread of coronavirus. Democrats, however, have raised concerns throughout negotiations that Republicans were working to prioritize aid to industry over workers and have called for more oversight safeguards as part of the deal.

Those concerns came to a head when Senate Democrats blocked two procedural votes to move ahead with a stimulus package — on Sunday and again on Monday — moves that ratcheted up tensions in the Capitol as Republicans argued that Democrats were obstructing progress toward a deal.

Now, however, it looks like both sides might be able to claim victory in the final deal.

Pelosi said on CNBC on Tuesday, “We think the bill has moved sufficiently to the side of workers.”

She said that she believes the Senate bill will incorporate House Democrats’ language on oversight for some of the funds in the package, and that the new version has also boosted resources for state and local governments. “We wanted a strong infusion of resources for state and local governments because they are taking a big bit of this apple,” she said.

Pelosi elaborated further on provisions of the package that Democrats support in an interview with CNN’s Dana Bash on “Inside Politics.”

“The fact that they now have assistance for state and local government was a big concern for us and that is — my understanding — is now in the bill. Unemployment insurance was almost right from the start agreed that we would have it, but the scope of it was enlarged and we are very pleased with where it is,” Pelosi said.

“Many of the provisions in there have been greatly improved because of negotiation,” she said.

Senate Democratic leader Chuck Schumer said on Tuesday that the legislation will have “unemployment insurance on steroids.”

“This is a great plan. What it says is if you lose your job in this crisis you can be furloughed by your employer. That means you stay on that employers work list, if you have health benefits with the employer you can keep getting them, but most importantly the federal government will pay your salary — your full salary — for now four months. We had asked for four months and four months looks like what we’re going to get when we come to this agreement,” he said.

But before a deal can go forward, congressional leaders will need to get members of their parties on board. How successful they are will determine how swiftly a stimulus plan can advance through both chambers.

Pelosi and her leadership team are now trying to sell their caucus on the Senate plan, arguing it is a much improved version of earlier proposals even as some of the more liberal members of the caucus have raised concerns over reports about the emerging deal.

According to sources on a conference call with the House Democratic Caucus, Pelosi told her caucus the bill is an improvement from a few days ago, contending it’s moved in a positive direction.

On the call, she argued that the $500 billion fund for distressed industries, for instance, will now be overseen by a five-person panel, one of the sources said.

This is a key point of contention within the House Democratic Caucus and freshman Democratic Rep. Alexandria Ocasio-Cortez of New York tweeted concerns about the emerging deal earlier Tuesday afternoon.

Pelosi said the bill is a “big advance,” but contended it was “not everything we want,” according to the source.

Winning over the caucus is important because any member — Republican or Democrat — could object and demand House members return to Washington to vote in person if lawmakers don’t cooperate and allow the vote to occur by unanimous consent or voice vote.

Also, on the call, Pelosi pointed that there would be $150 billion in funds for state and local governments and $130 billion for hospitals. She also said that Republicans would not agree to a 15% increase for food stamps and other nutritional programs, nor would they provide the money Democrats demanded to encourage states to adopt vote-by-mail programs.

House Majority Leader Steny Hoyer said on the call that there would be additional economic relief legislation as well.

Senate Republicans, meanwhile, were upbeat on Tuesday after a briefing about the bill and said they hoped it could pass late Tuesday or sometime Wednesday and be sent to the House for swift approval.

Lawyers who work in the Senate Office of Legislative Counsel now face a heavy lift in the hours ahead trying to draft complex legislative text that matches what Republicans and Democratic negotiators believe they agreed to during the marathon talks over the past few days.

“It’s a $2 trillion piece of legislation. We want to make sure that the language says what it is supposed to say,” said Sen. Lamar Alexander, a Republican of Tennessee who chairs the Committee on Health, Education, Labor, and Pensions HELP Committee, when he left the briefing.

Republican Sen. Marco Rubio of Florida said agreeing on legislative text can be a long and arduous process.

Much of the text has been drafted and redrafted in the back and forth bipartisan negotiations that started last Friday.

But getting the final language written — under intense pressure from their bosses who want to leave town — can be a daunting task for Senate lawyers.

As a former longtime top aide on Capitol Hill, White House legislative affairs director Eric Ueland — who’s been at the center of the talks — appreciates the subtleties of the legislative drafting process.

“There’s a lot of conceptual conversations, then it gets reduced to writing, people have a chance to read and review that. They have reaction to that. Additional conversations to get the concepts right, rinse, repeat. So we’re going through several rounds of that,” he said.

Meantime, negotiators are still trying to resolve at least two important issues — one related to airlines, the other to the food stamps program — but senators in each party said those issues were not deal breakers.