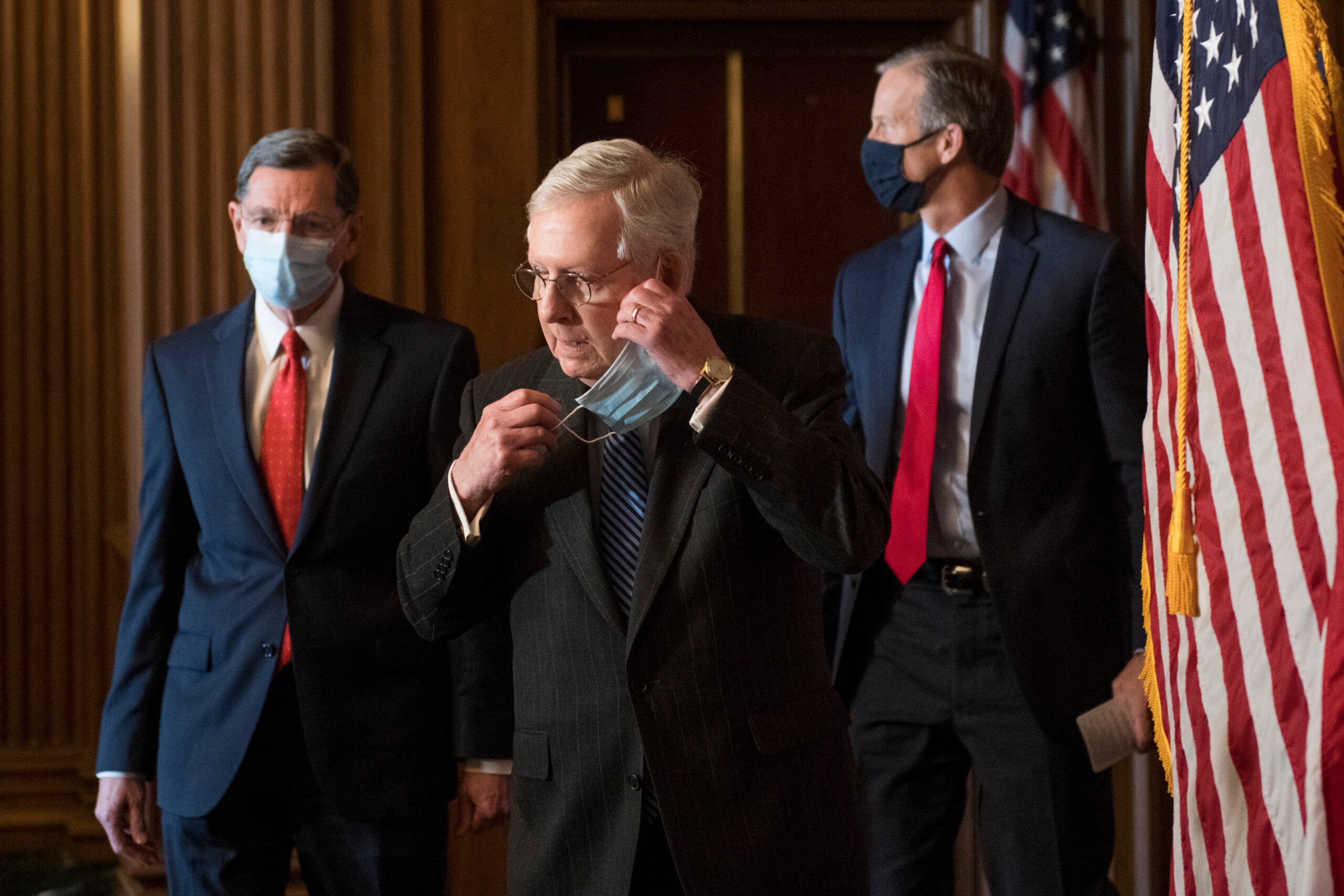 Senate Majority Leader Mitch McConnell, R-Ky., said early in the day he was “even more optimistic now than I was last night,” but Democrats launched a concerted campaign to block an effort by Republicans to rein in emergency Federal Reserve lending powers. They said the GOP proposal would deprive President-elect Joe Biden of crucial tools to manage the economy.

Believing a deal could be reached Friday “would be a triumph of hope over experience,” said a downbeat No. 2 Senate Republican, John Thune of South Dakota.

The House passed the temporary funding bill by a 320-60 vote as frustrated lawmakers headed for a weekend session.

Senate Majority Leader Mitch McConnell, R-Ky., said early in the day he was “even more optimistic now than I was last night,” but Democrats launched a concerted campaign to block an effort by Republicans to rein in emergency Federal Reserve lending powers. They said the GOP proposal would deprive President-elect Joe Biden of crucial tools to manage the economy.

Believing a deal could be reached Friday “would be a triumph of hope over experience,” said a downbeat No. 2 Senate Republican, John Thune of South Dakota.

Funding for the government was to lapse at midnight, and a partial, low-impact shutdown would ensue if Congress failed to pass the stopgap spending bill. All essential federal workers would remain on the job, and most government offices would be closed on the weekend anyway.

The two-day stopgap bill could be stopped by a single senator voicing an objection, but the most likely Republican to do so, Josh Hawley of Missouri, announced he would not block the measure after receiving assurances that direct payments for individuals were included in the broader measure.

Democrats came out swinging at a key obstacle: a provision by conservative Sen. Pat Toomey, R-Pa., that would close down more than $400 billion in potential Federal Reserve lending powers established under a relief bill in March. Treasury Secretary Steven Mnuchin is shutting down the programs at the end of December, but Toomey’s language goes further, by barring the Fed from restarting the lending next year, and Democrats say the provision would tie Biden’s hands and put the economy at risk.

“As we navigate through an unprecedented economic crisis, it is in the interests of the American people to maintain the Fed’s ability to respond quickly and forcefully,” said Biden economic adviser Brian Deese. “Undermining that authority could mean less lending to Main Street businesses, higher unemployment and greater economic pain across the nation.”

The key Fed programs at issue provided loans to small and mid-sized businesses and bought state and local government bonds, making it easier for those governments to borrow, at a time when their finances are under pressure from the pandemic.

The Fed would need the support of the Treasury Department to restart the programs, which Biden’s Treasury secretary nominee, Janet Yellen, a former Fed chair, would likely provide. Treasury could also provide funds to backstop those programs without congressional approval and could ease the lending requirements. That could encourage more lending under the programs, which have seen only limited use so far.

The battle obscured progress on other elements of the hoped-for agreement After being bogged down for much of Thursday, negotiators turned more optimistic, though the complexity of finalizing the remaining issues and drafting agreements in precise legislative form was proving daunting.

Lawmakers were told to expect to be in session and voting this weekend.

The delays weren’t unusual for legislation of this size and importance, but lawmakers are eager to leave Washington for the holidays and are getting antsy.

The pending bill is the first significant legislative response to the pandemic since the landmark CARES Act passed virtually unanimously in March, delivering $1.8 trillion in aid, more generous $600 per week bonus jobless benefits and $1,200 direct payments to individuals.

The CARES legislation passed at a moment of great uncertainty and unprecedented shutdowns aimed at stopping the coronavirus, but after that, many Republicans focused more on loosening social and economic restrictions as the key to recovery instead of more taxpayer-funded aid.

Now, Republicans are motivated chiefly to extend business subsidies and some jobless benefits, and provide money for schools and vaccines. Democrats have focused on bigger economic stimulus measures and more help for those struggling economically during the pandemic. The urgency was underscored Thursday by the weekly unemployment numbers, which revealed that 885,000 people applied for jobless benefits last week, the highest weekly total since September.

The emerging package falls well short of the $2 trillion-plus Democrats were demanding this fall before the election, but B iden is eager for an aid package to prop up the economy and help the jobless and poor. While he says more economic stimulus will be needed early next year, some Republicans say the current package may be the last.

“If we address the critical needs right now, and things improve next year as the vaccine gets out there and the economy starts to pick up again, you know, there may be less of a need,” said Sen. John Thune of South Dakota.

Most economists, however, strongly support additional economic stimulus as necessary to keep businesses and households afloat through what is widely anticipated to be a tough winter. Many forecast the economy could shrink in the first three months of 2021 without more help. Standard & Poor’s said in a report Tuesday that the economy would be 1.5 percentage points smaller in 2021 without more aid.

The details were still being worked out, but the measure includes a second round of “paycheck protection” payments to especially hard-hit businesses, $25 billion to help struggling renters with their payments, $45 billion for airlines and transit systems, a temporary 15% or so increase in food stamp benefits, additional farm subsidies, and a $10 billion bailout for the Postal Service.

The emerging package would combine the $900 billion in COVID-19 relief with a $1.4 trillion government-wide funding bill. Then there are numerous unrelated add-ons that are catching a ride, known as “ash and trash” in appropriations panel shorthand.

A key breakthrough occurred earlier this week when Democrats agreed to drop their much-sought $160 billion state and local government aid package in exchange for McConnell abandoning a key priority of his own — a liability shield for businesses and other institutions like universities fearing COVID-19 lawsuits.