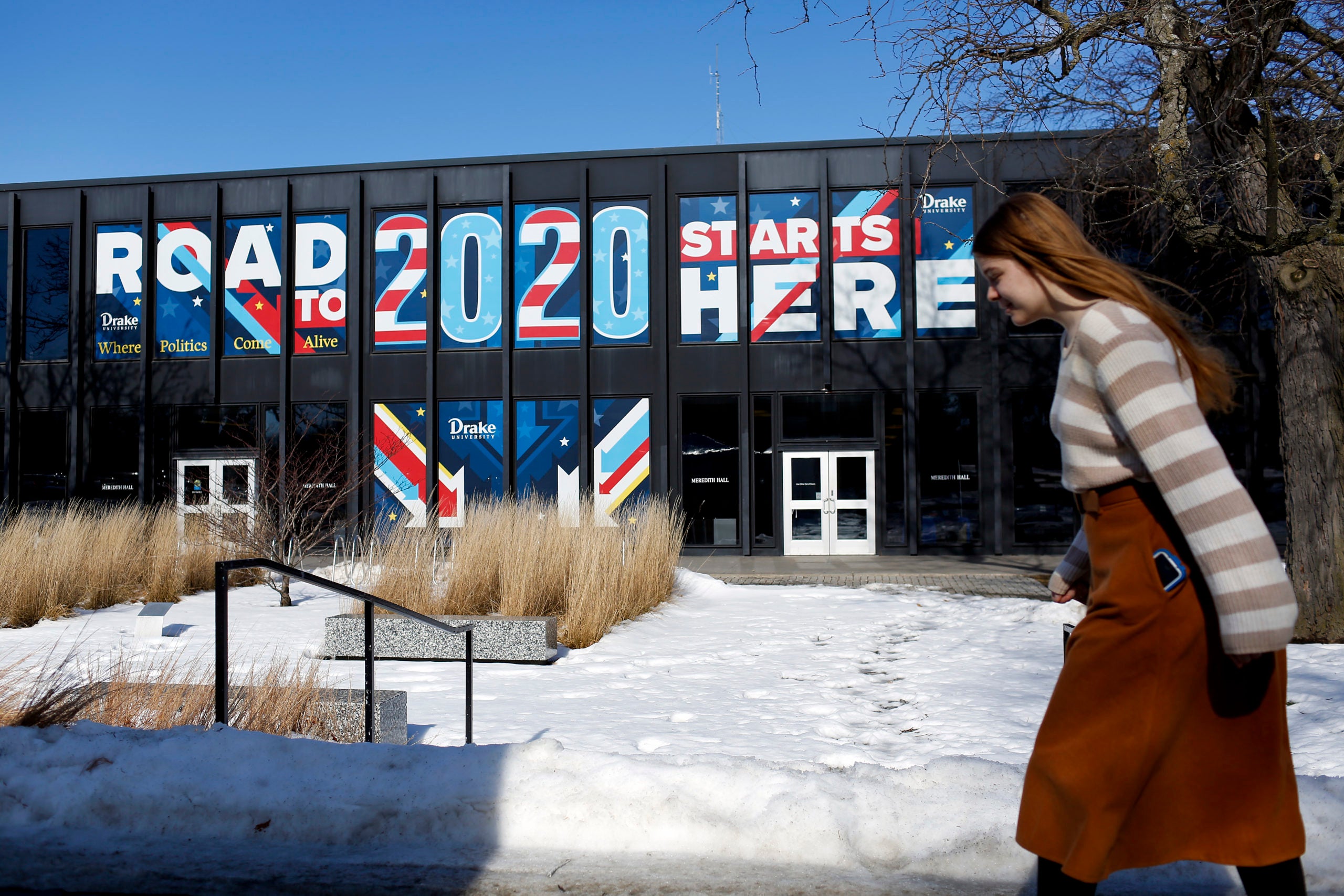 DES MOINES, IA - FEBRUARY 02: A woman walks past a sign displayed on a building a Drake University that reads "Road To 2020 Starts Here" on February 2, 2020 in Des Moines, Iowa. Tomorrow, Iowa voters will go to their local precincts to caucus for a one of several presidential candidates. (Photo by Joshua Lott/Getty Images)
by: JULIE PACE and SARA BURNETT, Associated Press
Posted: Feb 2, 2020 / 11:36 PM EST / Updated: Feb 2, 2020 / 11:36 PM EST

DES MOINES, Iowa (AP) — On the eve of the Iowa caucuses, Democratic presidential candidates hustled across the state on Sunday trying to fire up voters and make one last appeal to those struggling to reach a final decision about their choice in the crowded field.

Campaigns and voters acknowledged a palpable sense of unpredictability and anxiety as Democrats begin choosing which candidate to send on to a November face-off with President Donald Trump.

The Democratic race is unusually large and jumbled heading into Monday’s caucus, with four candidates locked in a fight for victory in Iowa and others still in position to pull off surprisingly strong finishes. Many voters say they’re still weighing which White House hopeful they’ll support.

“This is going to go right down to the last second,” said Symone Sanders, a senior adviser to former Vice President Joe Biden campaign.

Many campaigns were looking to a final weekend poll to provide some measure of clarity. But late Saturday, CNN and The Des Moines Register opted not to release the survey because of worries the results may have been compromised.

New caucus rules have also left the campaigns working in overdrive to set expectations. For the first time, the Iowa Democratic Party will release three sets of results: who voters align with at the start of the night; who they pick after voters supporting nonviable candidates get to make a second choice; and the number of state delegate equivalents each candidate gets.

The new rules were mandated by the Democratic National Committee as part of a package of changes sought by Sanders following his loss to Hillary Clinton in the 2016 presidential primaries. The revisions were designed to make the caucus system more transparent and to make sure that even the lowest-performing candidates get credit for all the votes they receive. But party officials in Iowa and at the DNC have privately expressed concerns that but multiple campaigns will spin the results in their favor, potentially creating chaos on caucus night.

The Associated Press will declare a winner in Iowa based on the number of state delegates each candidate wins. The AP will also report all three results.

Despite the late-stage turbulence and confusion, the candidates spent Sunday making bold pronouncements. Speaking to several hundred supporters in Cedar Rapids, Sanders declared “we are the campaign of energy and excitement” and said “we are in a position to win tomorrow night.”

Warren, who is also rallying progressive voters, pressed her supporters to “fight back” if they ever lose hope. She directly addressed any questions about whether a woman can win, pointing to gains during the 2018 elections as evidence that “women win.”

Buttigieg, meanwhile, talked up his newcomer status, telling a crowd of more than 2,000 in Des Moines that “we can’t be afraid of the future and new voices as our leaders” and “we are just one day away from victory in the Iowa caucuses!” But Biden, emphasizing his decades of Washington experience, told voters there’s no time for “on-the-job training.”

Biden’s campaign appeared to be trying to lower Iowa expectations, cautioning against reading too much into Monday’s results. Biden is hoping to sustain enough enthusiasm and money coming out of Iowa to make it to more diverse states where he hopes to draw strong support from black voters. His campaign is particularly focused on South Carolina, the fourth state on the primary schedule.

“We view Iowa as the beginning, not the end,” Symone Sanders said at a Bloomberg News breakfast. “It would be a gross mistake on the part of reporters, voters or anyone else to view whatever happens on Monday – we think it’s going to be close, but view whatever happens — as the end and not give credence and space for New Hampshire, Nevada, and South Carolina.”

Still, the closing hours leading into the caucuses signaled challenges ahead.

NBC News reported that former Secretary of State John Kerry, one of Biden’s most prominent supporters, was overheard talking about what it would take to launch a 2020 run. Kerry, who won the 2004 Iowa caucuses, later tweeted that he was “absolutely not running for president” and used an expletive to describe reporting to the contrary. He later issued a tweet without the expletive and Biden praised him during his final rally of the day.

But the episode was a sign of possible unease in Biden’s orbit.

And Republican Sen. Joni Ernst of Iowa warned that Biden could face GOP-led impeachment proceedings if he’s elected president. In an interview with Bloomberg News, she cited discredited theories from Trump and the GOP about Biden’s work as vice president in Ukraine while his son served in a lucrative post for a Ukrainian energy company.

“I think this door of impeachable whatever has been opened,” Ernst said, adding that Biden “should be very careful what he’s asking for” amid ongoing impeachment proceedings against Trump.

Trump’s impeachment trial has sidelined Sanders, Warren and Klobuchar for most of the last two weeks. They used Sunday to fan out across the state, eager to make up for lost time.

In Cedar Rapids, Klobuchar appealed to caucusgoers by asking them to think about the voters who won’t be caucusing — moderate Republicans, voters who swung from Barack Obama to Trump and voters who stayed home in 2016.

“They’re watching all of this right now,” Klobuchar said. “We have people who want to come with us. And we need a candidate who is going to bring them with us instead of shutting them out.”

But many voters, too, are still making last-minute moves. According to a Monmouth University poll in Iowa in late January, 45% of all likely Democratic caucus-goers named a first choice but said they were open to the possibility of supporting another candidate, and another 5% did not indicate a first choice.

Indeed, talking to Iowa Democrats can be dizzying. Many can quickly run through what they like — and what worries them — about the candidates in rapid fire, talking themselves in and out of their choices in a matter of minutes.

“There are just so many candidates,” said John Kauffman, a 38-year-old who works in marketing in Marion.