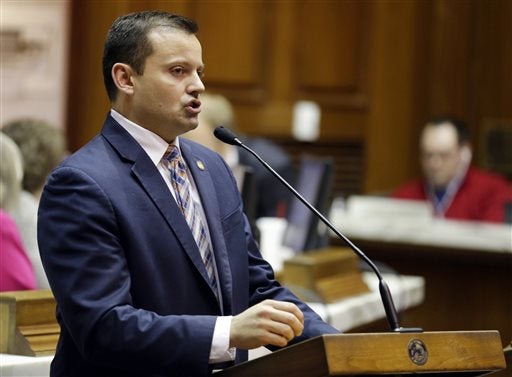 INDIANAPOLIS (AP) – A ranking Republican lawmaker abruptly resigned from the Indiana House after sending a text message apology for “anything offensive” that may have been sent from his cellphone.

House Majority Leader Jud McMillin of Brookville said in a statement Tuesday that he was giving up his seat to focus on his family.

The move comes a week after McMillin texted multiple people stating that his cellphone had been stolen and apologizing for messages they may have received from his number. Details about the content of those messages have not been revealed.

“My phone was stolen 24 hours ago in Canada. I have just been able to reactivate it under my control,” reads the text, which was obtained by The Associated Press. “Please disregard any messages you received recently. I am truly sorry for anything offensive you may have received.”

The Associated Press spoke to two people who received the text and obtained a copy of it from one of them. The two requested anonymity because it was a private message.

McMillin did not respond to requests for comment Tuesday. He did not answer calls from The Associated Press to his cellphone on Wednesday and his voicemail was full.

House Speaker Brian Bosma, R-Indianapolis, issued a statement thanking McMillin for his service and said the Republican Caucus supports McMillin’s decision to focus on his family. Bosma said a new majority leader will be selected in the coming days.

This not McMillin’s first brush with ethics in public office. Ten years ago, a domestic violence victim said they had a sexual relationship while he was handling the case as an assistant prosecutor in Montgomery County, Ohio. He resigned that position in 2005, a matter of weeks after he withdrew from the domestic violence case, and the woman sued him for legal malpractice the following year.

That lawsuit was later withdrawn.

McMillin said in court documents that the relationship had been voluntary and that it didn’t start until after he quit the prosecutor’s staff.

McMillin was first elected to the Legislature in 2010 and quickly climbed the ranks to be named to the No. 2 position in the House last November.

During this year’s legislative session, he was a prominent supporter of the state’s religious objections law and played a key role in efforts to shift authority away from Democratic state schools superintendent Glenda Ritz.

“After five years of dedicated service I have decided the time is right for me to pass the torch and spend more time with my family,” McMillin said in his resignation statement. “I hope that the work I have done in Indianapolis and in Southeastern Indiana has made the state and the communities I represent a better place.”

The opportunity to serve the 68th district has been one of the greatest honors of my life. However, after five years of dedicated service I have decided the time is right for me to pass the torch and spend more time with my family. I hope that the work I have done in Indianapolis and in Southeastern Indiana has made the state and the communities I represent a better place. Now I want to focus all of my attention on making my family’s world a better place.

Our caucus is thankful for Representative McMillin’s service to our state, and we fully support his decision to step down in order to focus on his family.

Sean Eberhart of Shelbyville is one of three lawmakers mentioned as a possible replacement as Majority Leader. He’s considering a run.

So is Matt Lehman, of Berne in Northeast Indiana.

Kevin Mahan of Hartford City is also mentioned as a possible candidate. Jud McMillin defeated him for the post not quite a year ago.

It’s the second time that a member of Speaker Bosma’s leadership team has resigned under an ethical cloud in less than year following the resignation of Eric Turner late last year.

The House Republicans will pick a new Majority Leader next Tuesday.