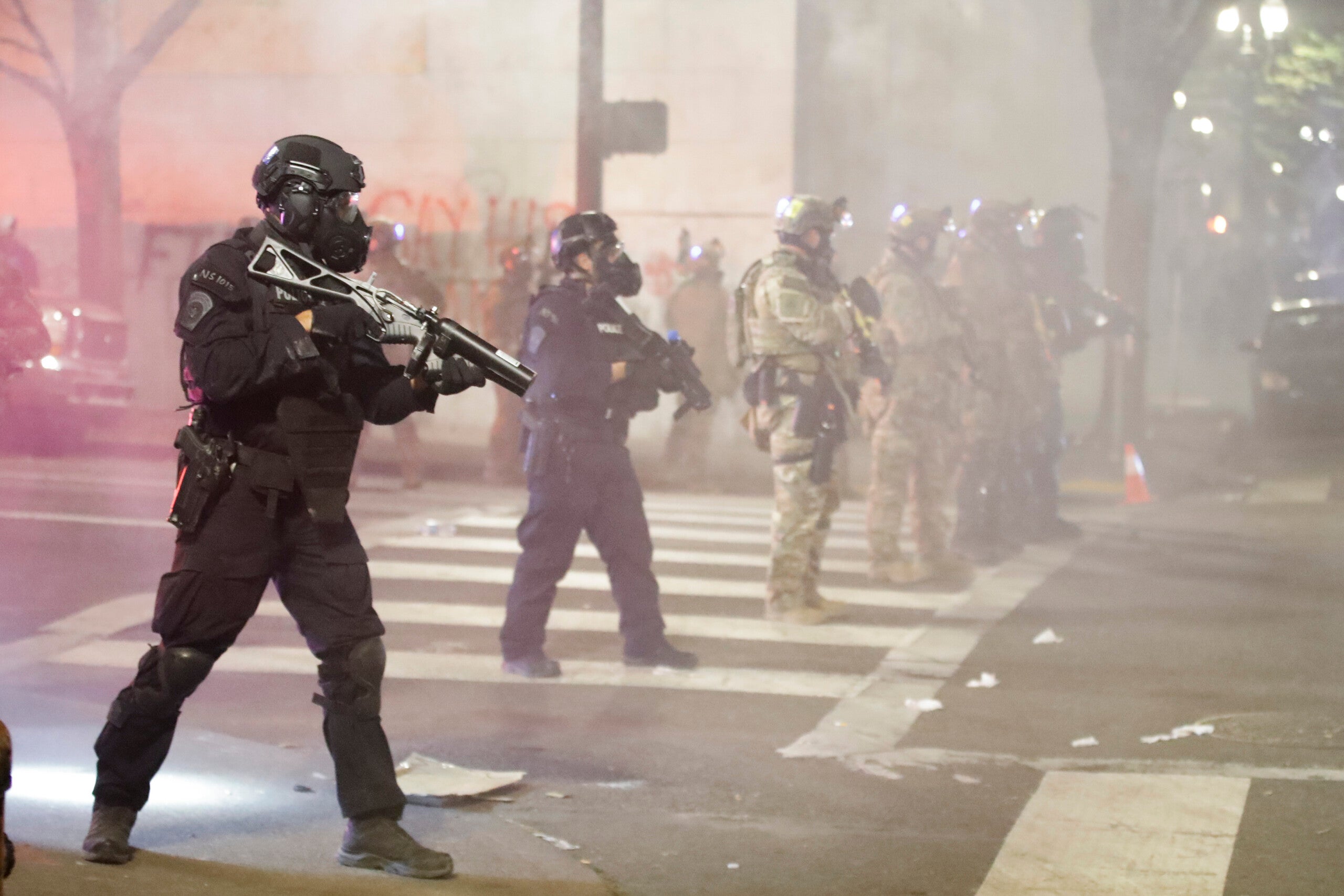 PORTLAND, Ore. (AP) — The mayors of Portland, Oregon, and five other major U.S. cities appealed Monday to Congress to make it illegal for the federal government to deploy militarized agents to cities that don’t want their presence.

“This administration’s egregious use of federal force on cities over the objections of local authorities should never happen,” the mayors of Portland; Seattle; Chicago; Kansas City; Albuquerque, New Mexico; and Washington wrote to leaders of the U.S. House and Senate.

Earlier Monday, a U.S. official said militarized officers will stay in Portland until attacks on the federal courthouse cease — and that more officers may soon head to the city.

“It is not a solution to tell federal officers to leave when there continues to be attacks on federal property and personnel,” U.S. Attorney Billy Williams said. ”We are not leaving the building unprotected to be destroyed by people intent on doing so.”

Local and state officials said the federal officers are unwelcome.

The city has had nightly protests for two months since the police killing of George Floyd in Minneapolis in May. President Donald Trump said he sent the federal agents to Portland to halt the unrest, but state and local officials said they are making the situation worse.

Trump’s deployment of the federal officers over the July 4 weekend stoked the Black Lives Matter movement. The number of nightly protesters had dwindled to perhaps less than 100 right before the deployment but has now has swelled to the thousands.

In protests and violence that happened Sunday night into early Monday morning, the federal agents repeatedly fired tear gas, flash bangs and pepper balls at protesters outside the federal courthouse in downtown Portland. Some protesters had climbed over the fence surrounding the courthouse, while others shot fireworks, banged on the fence and projected lights on the building.

Trump said on Twitter that federal properties in Portland “wouldn’t last a day” without the presence of the federal agents.

Most people participating in the daily demonstrations have been peaceful. But some attempt to pelt officers with objects and repeatedly try to tear down fencing around the courthouse.

Williams, whose office is inside the courthouse, called on peaceful protesters, community and business leaders and people of faith to prevent violence while they are there and to leave the downtown area before violence starts. He said federal agents have made 83 arrests.

Demonstrations in support of racial justice and police reform in other cities around the U.S. were also marred by violence over the weekend. Protesters set fire to an Oakland, California, courthouse; vehicles were set ablaze in Richmond, Virginia; an armed protester was shot and killed in Austin, Texas; and two people were shot and wounded in Aurora, Colorado, after a car drove through a protest.

The U.S. Marshals Service has lined up about 100 people they could send to hotspots, either to strengthen forces or relieve officers who have been working for weeks, agency spokesperson Drew Wade said.

Kris Cline, principal deputy director of Federal Protective Service, said an incident commander in Portland and teams from the Department of Homeland Security and Department of Justice discuss what force is needed every night.

Cline declined to discuss the number of officers currently present or if more would be arriving.

Some protesters have accused Wheeler, Portland’s mayor, of hypocrisy for speaking out against the federal presence because Portland police under his watch have used tear gas and other riot-control weapons on protesters, including peaceful ones.

Cline said Portland police should take over the job of dispersing protesters from the courthouse area from the federal officers.

“If the Portland Police Bureau were able to do what they typically do, they would be able to clear this out for this disturbance and we would leave our officers inside the building and not be visible,” Cline said.

He said relations between the federal officers, some of whom live in Portland, and city police were good.

Portland police responded Sunday evening to a shooting at a park close to the site of the protests. Two people were detained and later released, police said. The person who was shot went to the hospital in a private vehicle and was treated for a non-life-threatening wound.

Also late Sunday, police said someone pointed out a bag in the same park, where officers found loaded rifle magazines and Molotov cocktails. The shooting was not related to the items, police said.