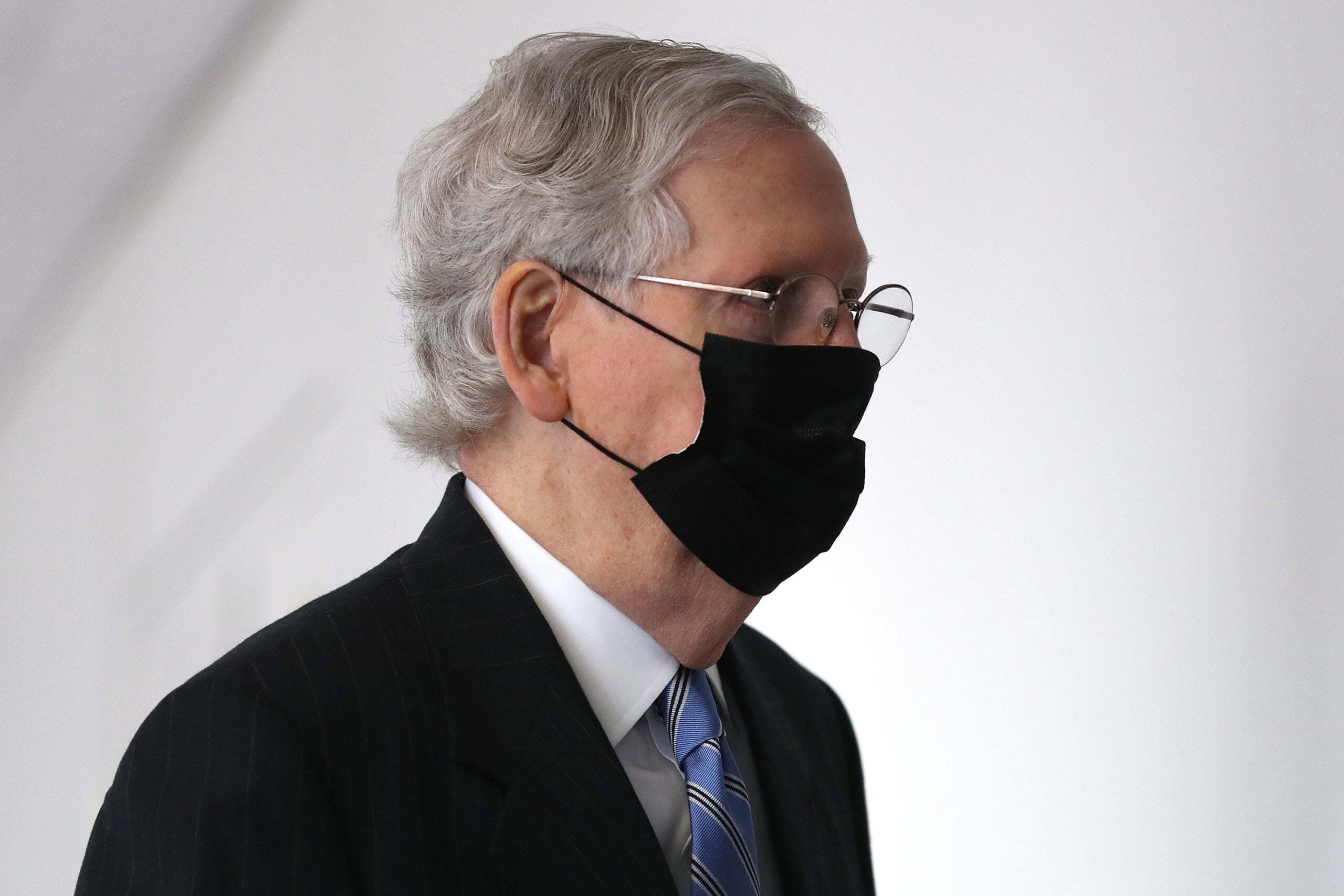 WASHINGTON, DC - SEPTEMBER 16: Senate Majority Leader Mitch McConnell (R-KY) arrives for a Republican senate luncheon in the Hart Senate Office Building on Capitol Hill September 16, 2020 in Washington, DC. Speaker of the House Nancy Pelosi (D-CA) told Democratic members of the House that they would not break before the November elections unless Congress funded an additional round of stimulus to aid the economy during the novel coronavirus pandemic. (Photo by Chip Somodevilla/Getty Images)
by: Ted Barrett, Lauren Fox and Paul LeBlanc, CNN
Posted: Oct 17, 2020 / 10:46 PM EST / Updated: Oct 17, 2020 / 10:46 PM EST

(CNN) — Senate Republicans on Tuesday will try to advance a stand-alone Paycheck Protection Program bill to help small businesses reeling from the coronavirus pandemic before moving on Wednesday to vote on the same $500 billion stimulus bill that Democrats blocked last month.

The votes, which Senate Majority Leader Mitch McConnell announced on Saturday, come as he tries to put increasing political pressure on Democrats to support the PPP measure while negotiations over a sweeping coronavirus relief package remain stalled.

It is not known how many Democrats might support it, but it is unlikely that the Senate Republican majority will get the necessary support to advance the bill.

McConnell had announced on Tuesday that Senate Republicans would attempt to move forward on a “targeted” coronavirus relief bill when the Senate returns to session.

“Republicans do not agree that nothing is better than something for working families,” he said in a statement referencing the small business loan Paycheck Protection Program. “The American people need Democrats to stop blocking bipartisan funding and let us replenish the PPP before more Americans lose their jobs needlessly.”

In contrast, Democrats have been pushing for a new stimulus with a price tag of more than $2 trillion. House Speaker Nancy Pelosi’s office said she will speak with Treasury Secretary Steve Mnuchin by phone Saturday evening, though significant policy disputes remain over what the bill should include.

The action on Capitol Hill is just the latest in months of back and forth between the two parties and the Trump administration — with the partisan majorities in both chambers passing or attempting to pass their own preferred legislation, only to have it rejected out of hand by the opposite side.

The Trump administration has made several attempts to negotiate with House Democrats, but a breakthrough has remained far out of reach throughout the course of the summer.

The pressure to strike a deal has become increasingly urgent with unemployment levels elevated, an epidemic of small business closures, and the end of the direct payments and enhanced unemployment insurance that helped float families and individuals throughout the pandemic-created economic shutdowns.

The pending result, according to economists, could be devastating if Congress and the Trump administration do not reach an agreement.

Pelosi and Mnuchin did make tangible progress in their talks Thursday. Mnuchin agreed to accept “with minor edits” the Democratic language on a national strategic testing, tracing and surveillance proposal, according to Pelosi’s spokesman Drew Hammill.

But Pelosi made clear to colleagues in a letter that several very significant policy disputes are nowhere near resolved.