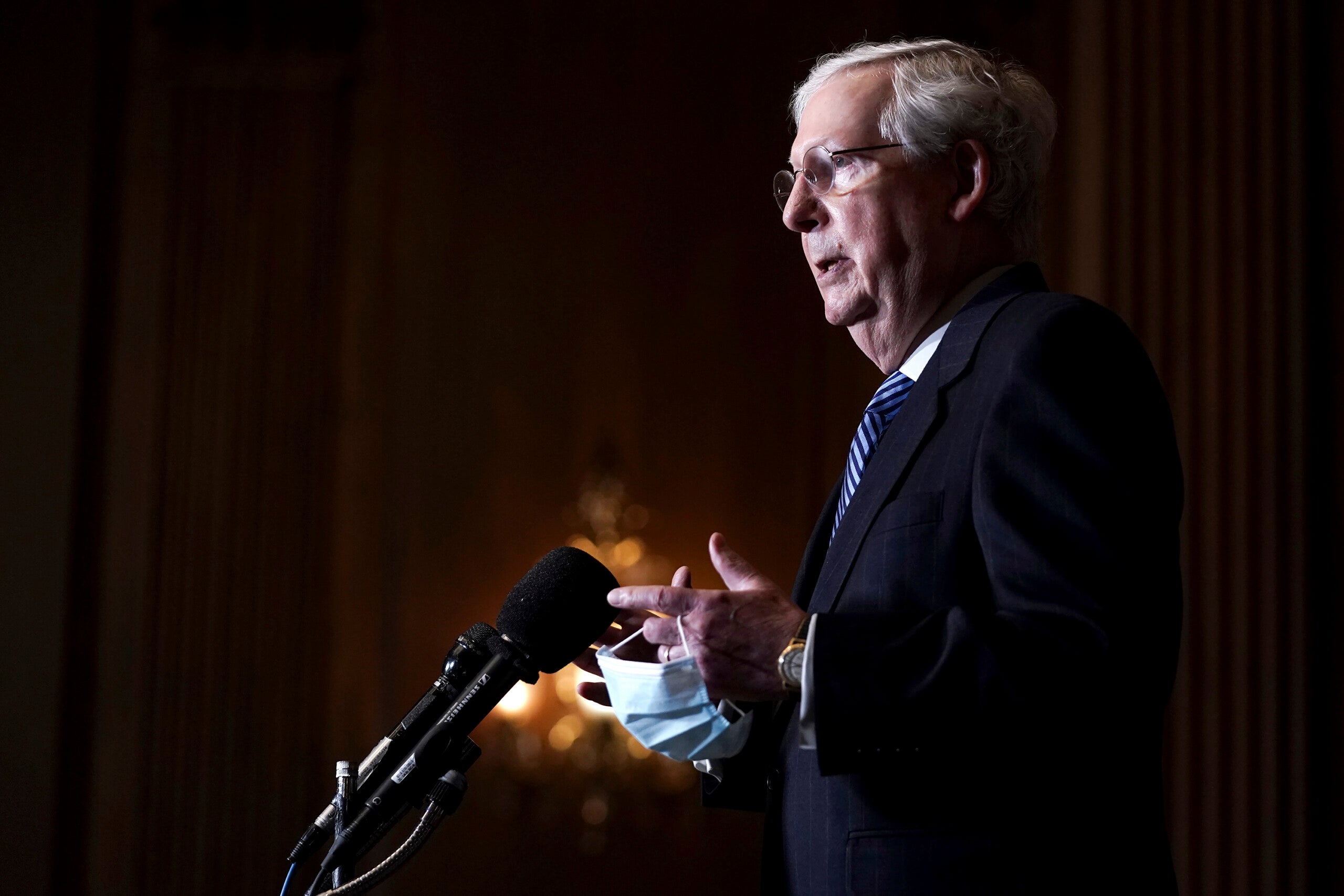 (CNN) — All eyes are on Senate Majority Leader Mitch McConnell on Tuesday.

After the House overwhelmingly voted to both override President Donald Trump’s veto on the National Defense Authorization Act and to pass $2,000 stimulus checks, it’s Senate Republicans’ turn to navigate whether they’re willing to cross Trump in his final days in office.

McConnell’s plans for the week were not immediately clear earlier Tuesday. The Kentucky Republican blocked an effort to quickly pass a measure to increase direct stimulus payments from $600 to $2,000, though the legislation could be voted on at a later time or date if McConnell so chooses.

Senate Minority Leader Chuck Schumer, a Democrat from New York, attempted to pass the change to the omnibus spending bill through a unanimous consent request on the Senate floor, but any senator can halt passage of legislation that way. McConnell objected to the request.

Still, McConnell also said on Tuesday that the Senate would consider three of Trump’s priorities — further direct financial support for Americans, reexamining Section 230’s protections for technology firms and ballot integrity efforts — this week. The reexamining of Section 230 came as Trump vetoed the National Defense Authorization Act over not including revisions to the law that shields internet companies from liability for what is posted on their websites by them or third parties.

McConnell’s remark about bringing Trump’s priorities “into focus” was not a commitment to bringing votes on the issues. The standoff leaves action on the Senate NDAA override vote in question, and the majority leader might have to file cloture to overcome objections and set up the vote for later this week.

Bottom line: If McConnell announces plans to bring the bill increasing stimulus checks up for a formal vote, it could still take several days for that vote to occur given the procedural hurdles.

McConnell knows adding $2,000 checks to this bill would cost hundreds of billions more. In order for it to pass, McConnell would need 12 Republicans to sign on and right now, it’s not clear that many exist. Sen. Marco Rubio, a Republican from Florida, has said he’d back the payments. And Sen. Josh Hawley, a Republican from Missouri, has been a strong proponent of stimulus checks. But, a vote on the issue would undoubtedly divide the Republican conference and force Georgia Sens. Kelly Loeffler and David Perdue to vote on the issue just days ahead of their runoff election. It would also expose members who vote no to the ire of the President, who has never taken kindly to being crossed.

Both Loeffler and Perdue said Tuesday they would support increasing direct stimulus payments to $2,000.

“President ⁦‪@realDonaldTrump⁩ is right — I support this push for $2,000 in direct relief for the American people,” Perdue tweeted.

“I’ve stood by the President 100% of the time, I’m proud to do that,” Loeffler told Fox News on Tuesday in response to a question about providing $2,000 payments, a position President Trump supports. “I’ve said absolutely, we need to get relief to Americans now, and I will support that.” When asked directly by CNN at an event later Tuesday if she would support increasing the direct payments to $2,000, Loeffler responded, “I said I would support it.”

A vote for $2,000 checks could also boost Perdue and Loeffler in their races. The provision is popular. And, even if the measure didn’t pass, putting it on the floor would demonstrate to the President that McConnell tried, but the votes just weren’t there. McConnell, as usual, has been seeking the input of his members.

It’s also possible, and some Democratic aides CNN has spoken with are fearful that McConnell could tie a vote on $2,000 checks to a less popular provision making it tougher for Democrats to vote for. Remember, that Trump argued he’d gotten assurances that the Senate would also take up a repeal of Section 230, which protects web companies from liability for what third party users post on their sites. That would scramble party lines and make a vote on $2,000 checks much harder for Democrats to swallow.

McConnell had hoped to bring up the NDAA override vote Wednesday. But, Vermont Independent Sen. Bernie Sanders has said he will block the measure unless McConnell brings up $2,000 checks, comments he repeated on Tuesday.

“The leaders of our country, President Trump, President-elect Biden, Minority Leader Chuck Schumer, the Speaker of the House Nancy Pelosi are all in agreement,” Sanders said in a floor speech. “We have got to raise the direct payment to $2,000. So, that is where we are right now in this historic moment. Do we turn our backs on struggling working families or do we respond to their pain?”

Again, we don’t know what McConnell’s plans are on checks yet, but if he doesn’t make a promise to bring them to the floor, Sanders could force McConnell to run out the clock until New Year’s Day on the NDAA veto override vote. Sources expect the votes will be there to override the NDAA in the Senate. It’s just a matter of when. A delay could keep Loeffler and Perdue off the campaign trail just days ahead of their runoffs.

This story has been updated with additional developments Tuesday.