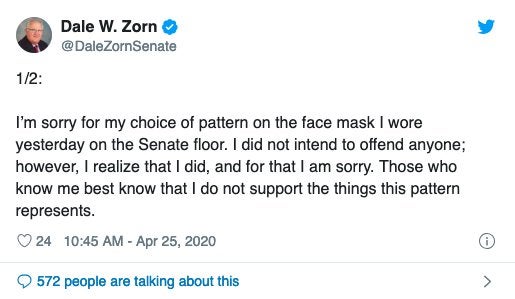 Michigan state Senator Dale Zorn, a Republican from Ida, apologizes in a pair of Twitter posts for wearing a face mask with what appeared to be a Confederate flag pattern on the Michigan Senate floor in late April.
by: Rebekah Riess, CNN
Posted: May 15, 2020 / 04:10 PM EST / Updated: May 15, 2020 / 04:27 PM EST

(CNN) — Multiple Michigan branches of the NAACP are calling for the immediate resignation of Michigan state Sen. Dale Zorn after he wore a face mask with what appeared to be a Confederate flag pattern on the Michigan Senate floor in late April.

The senator, a Republican, had apologized in a pair of Twitter posts the following day. He told CNN affiliate WLNS that his wife made the face mask for him, and it was not a Confederate flag.

The NAACP branches sent a letter to Zorn, demanding he step down from his position as senator of Michigan’s 17th District, calling his action insensitive to his constituents and “inappropriate for any elected official.”

The NAACP has denounced the waving of Confederate flags, swastikas and “threatening signs aimed at the Governor.”

In a statement to CNN, Zorn said: “I’m sorry for my choice of pattern on the face mask I wore on the Senate floor. I did not intend to offend anyone; however, I realize that I did, and for that I am sorry. Those who know me best know that I do not support the things this pattern represents. My actions were an error in judgment for which there are no excuses and I will learn from this episode.”

Zorn told WLNS that even if it were a Confederate flag, it represents a part of our history and we should be teaching about the “atrocities that happened during that time” so it doesn’t happen again.