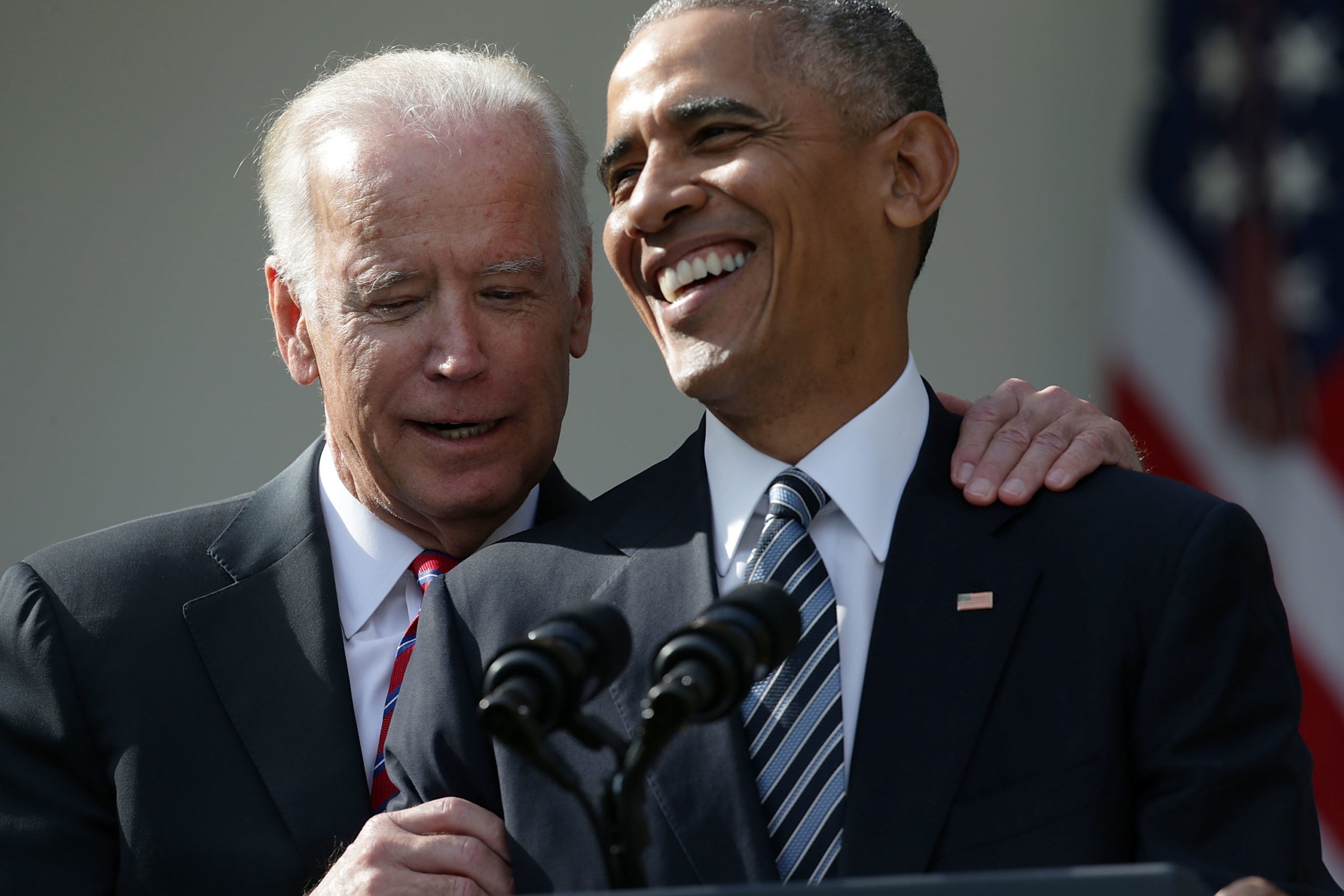 WASHINGTON, DC - NOVEMBER 09: U.S. President Barack Obama (R) and Vice President Joseph Biden (L) share a moment during a statement on the election results at the Rose Garden of the White House November 9, 2016 in Washington, DC. Republican presidential nominee Donald Trump has won the election and will become the 45th president of the United States. (Photo by Alex Wong/Getty Images)
by: Dan Merica, CNN
Posted: Feb 27, 2020 / 07:03 AM EST / Updated: Feb 27, 2020 / 07:04 AM EST

The ad was made by The Committee to Defend the President, a super PAC that works to help President Donald Trump and hurt his Democratic rivals, including Biden. It is slated to air in television stations across South Carolina this week.

The cease-and-desist letter was drafted by Perkins Coie, the law office representing Obama.

“This unauthorized use of President Obama’s name, image, likeness, voice and book passage is clearly intended to mislead the target audience of the ad into believing that the passage from the audiobook is a statement that was made by President Barack Obama during his presidency, when it was in fact made by a barber in a completely different context more than 20 years ago,” stated the letter written by Patchen M. Haggerty.

The former vice president often touts his close ties to Obama, regularly referring to him as “Barack” on the campaign trail and debate stage. And the fact that the super PAC is targeting Biden’s tie to black voters is politically relevant — the former vice president needs black voters in South Carolina to stick with him in order to win on Saturday.

“The Committee has a long history of taking on Joe Biden, beyond Nevada and South Carolina. President Obama made a point in his book about Democrats paying lip-service to the African-American community and we believe his point applies perfectly to Joe Biden,” Ted Harvey, chairman of The Committee to Defend the President, said in a statement.

Katie Hill, an Obama spokeswoman, said Wednesday that the former President “has several friends in this race, including, of course, his own esteemed Vice President,” and Obama still “has no plans to endorse in the primary because he believes that in order for Democrats to be successful this fall, voters must choose their nominee.”

“But this despicable ad is straight out of the Republican disinformation playbook, and it’s clearly designed to suppress turnout among minority voters in South Carolina by taking President Obama’s voice out of context and twisting his words to mislead viewers,” said Hill. “In the interest of truth in advertising, we are calling on TV stations to take this ad down and stop playing into the hands of bad actors who seek to sow division and confusion among the electorate.”

The group touted the ad on Tuesday, arguing that Biden — by seemingly citing the 1994 crime bill — “joined segregationists, wrote a bill that disproportionately jailed African Americans, & blamed black parents for inequality. He will not represent us.”

Andrew Bates, a Biden spokesman, said, “This latest intervention in the Democratic primary is one of the most desperate yet, a despicable torrent of misinformation by the President’s lackeys.”

Obama, despite not endorsing, has been a force in the Democratic primary. Candidates have used his voice or image in television campaign ads and others have touted their ties to the former President, who remains popular with the Democratic base.

But Obama has also stepped into the nomination conversation by urging Democrats to stop worrying about the quality of the candidates, while also expressing concerns about the contentious arguments playing out inside the party and decrying “purity tests” because “the country’s complicated.”

“Those are good arguments to have,” he said about debates of health care and climate change, “but you got to win the election.”