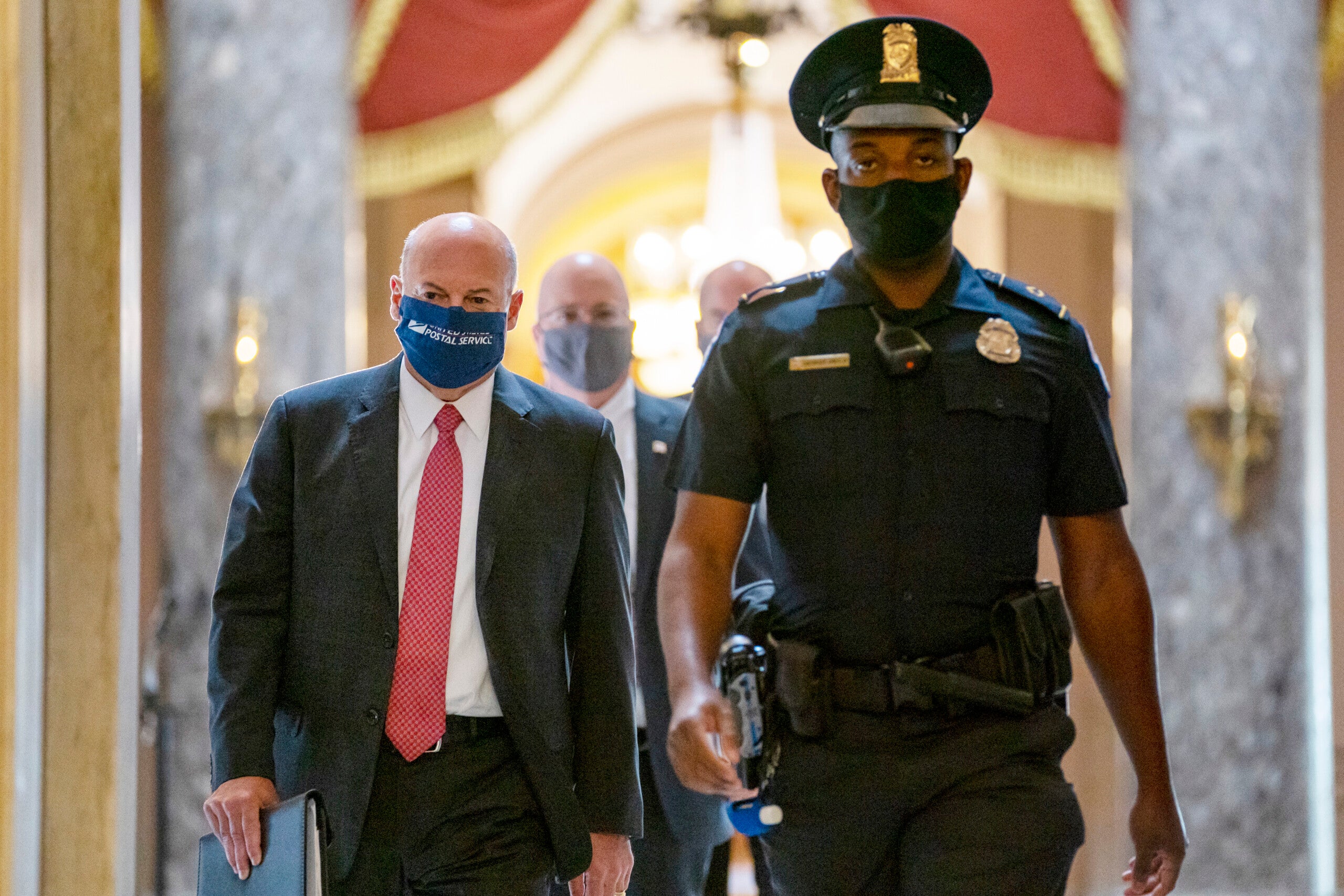 FILE - In this Aug. 5, 2020, file photo Postmaster General Louis DeJoy, left, is escorted to House Speaker Nancy Pelosi's office on Capitol Hill in Washington. The U.S. Postal Service has sent letters to 46 states and the District of Columbia, warning it cannot guarantee all ballots cast by mail for the November election will arrive in time to be counted, The Washington Post reported Friday, Aug. 14. DeJoy, a former supply-chain CEO and a major donor to President Donald Trump and other Republicans, has pushed cost-cutting measures to eliminate overtime pay and hold mail until the next day if postal distribution centers are running late. (AP Photo/Carolyn Kaster, File)
by: AAMER MADHANI and MATTHEW DALY, Associated Press
Posted: Aug 16, 2020 / 07:45 PM EST / Updated: Aug 16, 2020 / 07:45 PM EST

WASHINGTON (AP) — Speaker Nancy Pelosi said Sunday she is calling the House back into session this week to vote on a bill prohibiting the U.S. Postal Service from implementing any changes to operations or level of service. The action comes amid growing concerns that the Trump White House is trying to undermine the agency during the coronavirus pandemic while states expand mail-in voting options.

In a letter to Democratic lawmakers Sunday evening, Pelosi also called on her colleagues to appear at a post office in their district on Tuesday for a coordinated news event. “In a time of a pandemic, the Postal Service is Election Central. Americans should not have to choose between their health and their vote,” she wrote.

Pelosi said House Democratic Leader Steny Hoyer would soon announce the legislative schedule for the coming week. House Democrats were likely to discuss the schedule on a conference call on Monday and were expected to be in session next Saturday, a senior Democratic aide said on condition of anonymity because the plans were private.

The House Oversight and Reform Committee said it wants to hear from new Postmaster General Louis DeJoy and from the chair of the Postal Service board of governors, Robert “Mike” Duncan. With heightened scrutiny of its operations, the agency is now requesting a temporary preelection rate increase, from mid-October through Christmas, although not for first-class letters.

The agency did not immediately respond to requests for comment about whether the two men would appear before the House committee. But it said Sunday it would stop removing its distinctive blue mailboxes through mid-November following complaints from customers and members of Congress that the collection boxes were being taken away.

“Given the recent customer concerns the Postal Service will postpone removing boxes for a period of 90 days while we evaluate our customers’ concerns,” said Postal Service spokeswoman Kimberly Frum.

DeJoy, a major Republican donor and ally of the president who took control of the agency in June, has pledged to modernize the money-losing agency to make it more efficient, and has eliminated most overtime for postal workers, imposed restrictions on transportation and reduced of the quantity and use of mail-processing equipment.

“The postmaster general and top Postal Service leadership must answer to the Congress and the American people as to why they are pushing these dangerous new policies that threaten to silence the voices of millions, just months before the election,” congressional Democrats said in a statement announcing the hearing.

Trump said last week that he was blocking a $25 billion emergency injection sought by the Postal Service, as well as a Democratic proposal to provide $3.6 billion in additional election money to the states. The Republican president worries that mail-in voting could cost him reelection. The money for the post office is intended to help with processing an expected surge of mail-in ballots. Both funding requests have been tied up in congressional negotiations over a new coronavirus relief package.

On Saturday, Trump tried to massage his message, saying he supports increasing money for the Postal Service. He said he was refusing to capitulate to Democrats on other parts of the relief package, including funding for states weighed down by debt accumulated before the pandemic.

But the president’s critics were not appeased, contending that Trump has made the calculation that a lower voter turnout would improve his chances of winning a second term.

“What you are witnessing is a president of the United States who is doing everything he can to suppress the vote, make it harder for people to engage in mail-in balloting at a time when people will be putting their lives on the line by having to go out to a polling station and vote,” said Sen. Bernie Sanders, I-Vt.

Earlier this month, Maloney’s committee had invited DeJoy to appear Sept. 17 at a hearing focusing on operational changes to the Postal Service that are causing delays in mail deliveries.

But after Trump acknowledged in a Fox Business interview on Thursday that he’s starving the agency of money to make it harder to process an expected surge of mail-in ballots, the committee decided to move up their call for the appearance of DeJoy’ well as the governing board chair.

Funding a cash-strapped Postal Service has quickly turned into a top campaign issue as Trump presses his unsupported claim that increased mail-in voting will undermine the credibility of the election and Democrats push back.

Trump, who spent the weekend at his New Jersey golf club, derided universal mail-in voting as a “scam” and defended DeJoy as the right person to “streamline the post office and make it great again.”

His chief of staff tried on Sunday to counter criticism that Trump was trying to stifle turnout with national and battleground state polls showing him facing a difficult path to reelection against Democrat Joe Biden.

“I’ll give you that guarantee right now: The president of the United States is not going to interfere with anybody casting their vote in a legitimate way, whether it’s the post office or anything else,” Mark Meadows said.

But Democrats said changes made by DeJoy constitute “a grave threat to the integrity of the election and to our very democracy.” They asserted that DeJoy “has acted as an accomplice in the president’s campaign to cheat in the election, as he launches sweeping new operational changes that degrade delivery standards and delay the mail.”

The agency in the meantime is now seeking a short-term end-of-the-year rate increase, according to a notice filed Friday with the Postal Regulatory Commission. The reasons: increased expenses, heightened demand for online packages due to the coronavirus pandemic and an expected increase in holiday mail volume.

Most of the proposed increases would be less than 10%. They range from 24 cents for Parcel Select Service, which starts at $3.05, to a $1.50 increase for Priority Mail Express Commercial, which starts at $22.75. The regulatory commission is expected to decide on the proposals next month.

The Postal Service is the country’s most popular government agency with 91% of Americans having a favorable opinion of the service, according to a Pew Research Center Survey published in April.

“What concerns me is an all-out attack — they’re not even hiding it — by the president of the United States to undermine the United States Postal Service, to underfund it, to allow a mega-donor leading it to overtly do things to slow down the mail,” said Sen. Cory Booker, D-N.J.

Sanders was on NBC’s “Meet the Press,” while Meadows and Booker appeared on CNN’s ”State of the Union.” 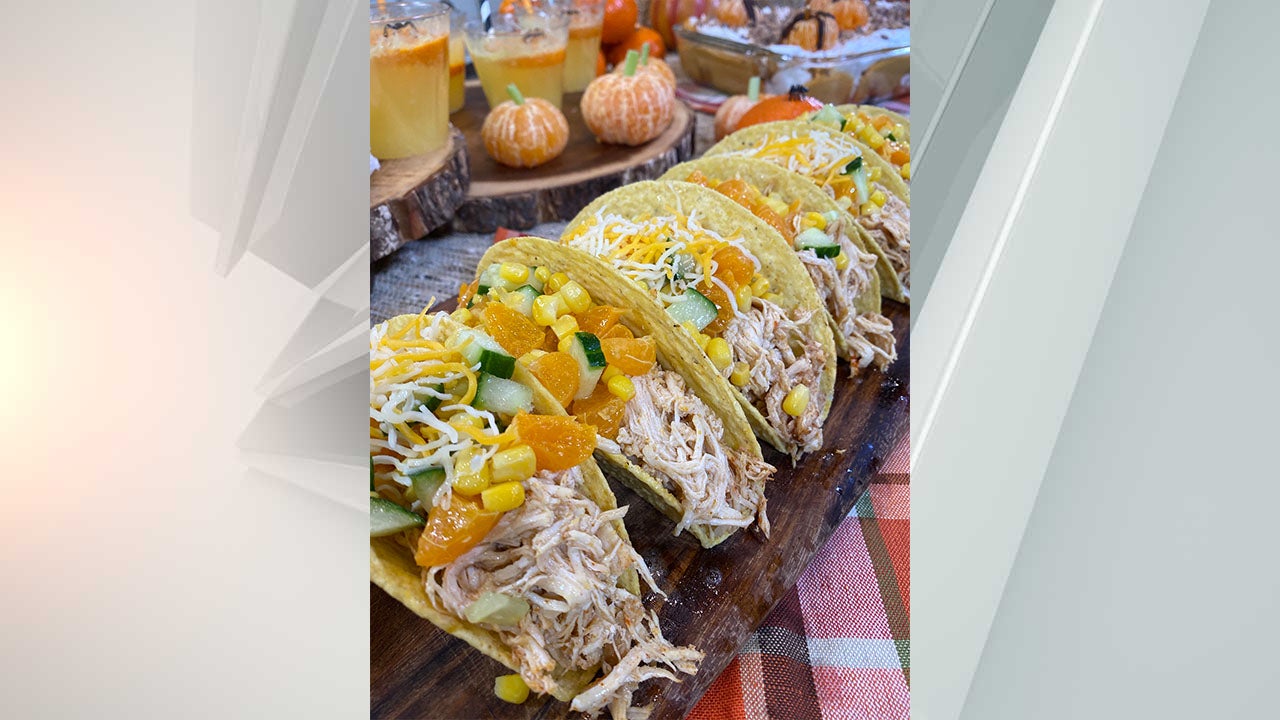 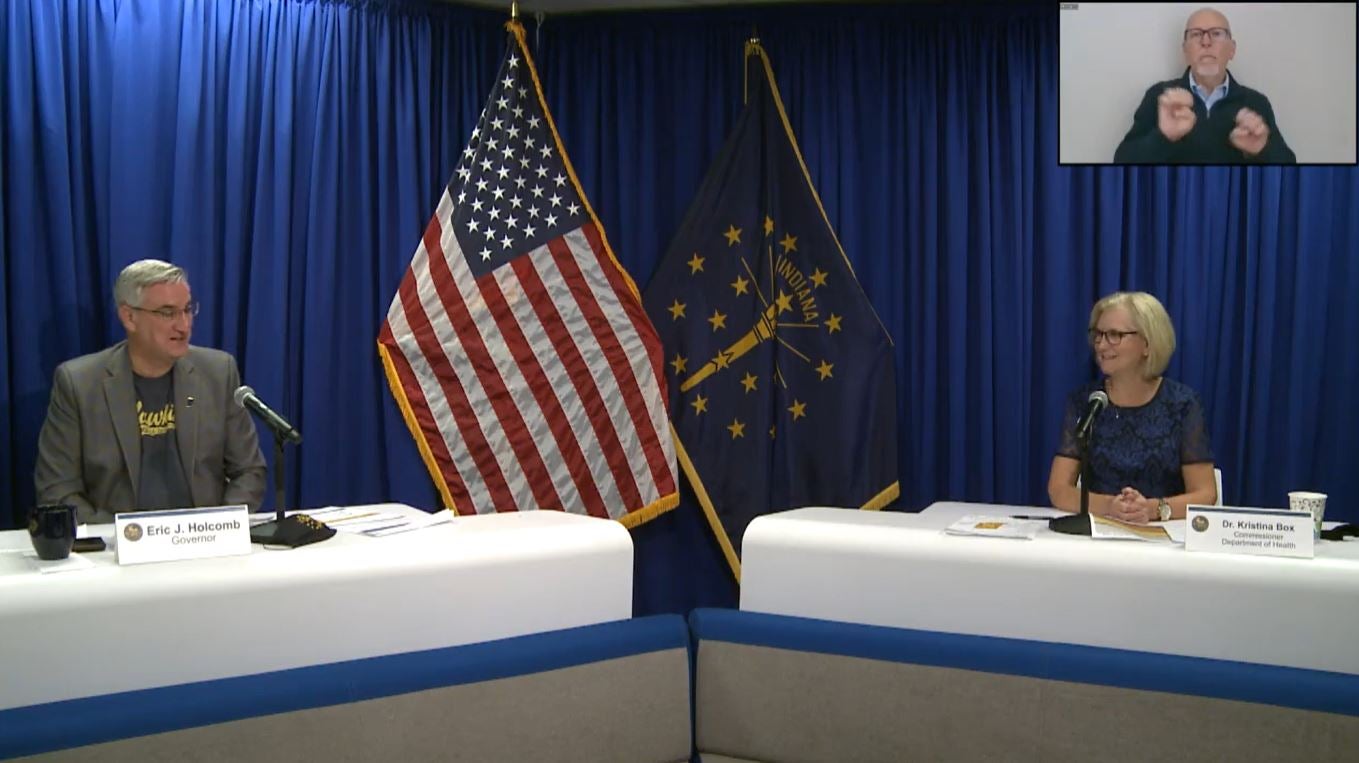