The Latest: Maryland to ease COVID restrictions this week 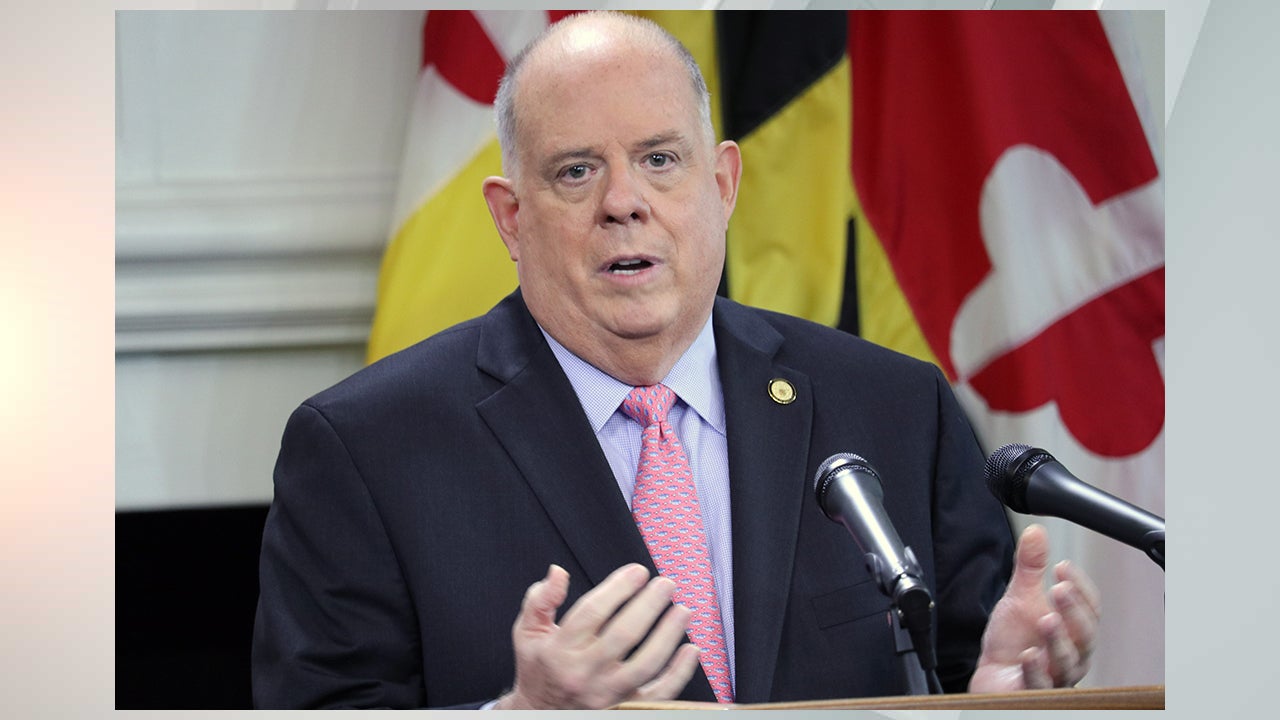 Starting Friday at 5 p.m., capacity limits will be lifted on outdoor and indoor dining at restaurants and bars, though customers will still need to be seated and distanced, the governor said. Capacity limits also will be lifted for retail businesses, religious facilities, personal services like hair and nail salons and indoor recreation establishments like casinos and bowling alleys.

Maryland’s statewide mask mandate will remain in effect. It requires face coverings at any public indoor facility, including retail establishments, fitness centers, grocery stores, pharmacies, personal service establishments. Masks also are required in the public spaces of all public and private businesses across the state, and when using public transportation.

Larger outdoor and indoor venues will be able to expand to 50% capacity. That includes conference halls, wedding venues, theaters and sporting arenas like Camden Yards, where the Baltimore Orioles baseball team plays.

MIAMI — Hundreds of cars streamed bumper-to-bumper into a federally supported vaccination site that appeared to be offering shots to anyone who shows up, breaking from the eligibility requirements set by Gov. Ron DeSantis that were intended to put seniors at the head of the line.

The wider availability of the vaccine sowed confusion — and hope — among those wanting to protect themselves from a disease that has already infected more than 1.9 million Floridians and killed nearly 32,000.

State officials said they were sorting through the situation. It was unclear what authority state officials might be able to exert on federal facilities.

Already, federal sites in Florida are adhering to federally issued guidelines that allow teachers and other school workers to get vaccinated, instead of complying with the governor’s directive setting an age minimum of 50 for educators and school staff.

Because of initially low demand, another federally funded vaccination site in Florida City last weekend began administering shots to any takers, regardless of age. The site was inundated the following day, prompting officials there to reimpose age restrictions.

On Tuesday morning, a traffic jam of vehicles formed in a parking lot at Miami Dade College North. People waited hours, but by 10 a.m., officials at the site announced they had depleted their supply of the Johnson & Johnson vaccine.

SAN FRANCISCO — California’s counties remain skittish over switching up their vaccine delivery systems to a new statewide one, with Santa Clara County saying it will not participate.

The Mercury News reports that County Executive Jeff Smith said late Monday that the county will not sign a contract giving Blue Shield control over COVID-19 vaccine distribution in California.

Some counties are also pushing for Newsom to reconsider a plan to distribute more vaccine to vulnerable areas.

The pushback to Newsom’s centralized plan for vaccine distribution comes as more of California reopens its economy and activities. Disney’s CEO says Disneyland will likely reopen by late April after a yearlong closure.

MONTGOMERY, Ala. — With Alabama trailing most of the nation in COVID-19 vaccinations, National Guard troops will begin work later this month administering doses in at least 24 rural counties, the state said Tuesday.

The Alabama National Guard, with two 55-member mobile vaccination teams that can provide 8,000 doses a week in all, will work with public health and local officials to determine exact sites and logistics, Gov. Kay Ivey’s office said in a statement. Guard immunizations will start March 23.

Statistics from the Centers for Disease Control and Prevention showed 15.2% of Alabama’s 4.9 million residents have received at least one dose of the vaccine that protects against the new coronavirus that causes COVID-19. That was lower than any state other than neighboring Georgia, where 13.4% had gotten at least one shot.

Guard teams will rotate through counties to provide shots to more people, the statement said. Ivey asked for patience since the state is still trying to get more vaccine from the federal government.

The Casper Star-Tribune reported Monday that the Teton County Health Department said a sample from a resident who tested positive for COVID-19 in January revealed the variant.

Health officials said the yet-unidentified person did not travel prior to becoming infected. State health officials have not announced any other cases of the variant.

County Health Officer Dr. Travis Riddell has encouraged residents to get coronavirus tests if they have symptoms or come in contact with someone who tested positive.

SEATTLE — Seattle officials say the start of in-person classes for some special-education students and preschoolers has been pushed back to March 29.

Seattle Public Schools had hoped to resume classroom learning for some students during the coronavirus pandemic this week. The new target date was announced Tuesday by the district and the teachers’ union.

The Seattle Times reports the announcement comes after intense opposition from the union to the district’s move to summon 700 educators back to buildings this week to teach students ahead of an agreement on expanding in-person instruction.

Those staffers were supposed to report to their buildings on Monday to ready their classrooms for learning, but a campaign by the union — the Seattle Education Association — asked them to stay remote.

The two parties are still working on an agreement to offer in-person services to around 10,000 students, including kindergartners and first-graders.

WASHINGTON — The U.S. is making an additional 900,000 doses of Pfizer and Moderna vaccines available to states and pharmacy partners this week.

White House press secretary Jen Psaki announced that states and territories will receive 15.8 million doses of the two-shot vaccines, up from 15.2 million last week. Another 2.7 million doses will be distributed through the federal pharmacy program this week.

There will be no shipments this week of the newly approved single-shot Johnson & Johnson vaccine due to manufacturing constraints. Those deliveries, which total 3.9 million doses so far, are set to resume as soon as next week. Another 16 million doses are expected to be shipped by the end of the month.

BATON ROUGE, La. — Louisiana is throwing open coronavirus vaccine eligibility to anyone 16 and older with pre-existing conditions such as high blood pressure or diabetes.

The Democratic governor’s decision newly adds anyone age 16 to 54 if they have cancer, diabetes, asthma, sickle cell disease, chronic kidney disease, chronic pulmonary disease, Down syndrome, heart conditions or other health issues. Smokers and people who are overweight also are eligible.

The state’s pandemic total of confirmed cases increased to 827,800 while the total death toll dropped by two to 16,326. The state Department of Health Services attributed the decrease to a review of death certificates.

Related hospitalizations rose with 928 COVID-19 patients occupying inpatient beds on Monday, up from 919 on Sunday. It’s far below the pandemic high of 5,082 on Jan. 11.

The Democratic governor announced the change in an appearance at a vaccination site in Syracuse. In addition to people who qualify for vaccinations because of their age, vaccinations in New York are open to people with certain health conditions and to essential workers including teachers, health care providers and police officers.

About 18% of New Yorkers have at least one dose of a vaccine, in line with the national average, according to the U.S. Centers for Disease Control and Prevention.

Both of those variants of the virus are believed to be more easily transmitted. State officials say they expect to receive 82,430 doses of the vaccines this week. Last week, officials say 90,461 people across Nebraska were vaccinated.

WASHINGTON — The Smithsonian’s National Museum of American History has acquired the vial that contained the first dose of COVID-19 vaccine administered in the United States.

The museum announced the acquisition of the vial and other materials related to that first vaccine dose on Tuesday to mark the upcoming one-year anniversary of the pandemic on Thursday.

Associated Press journalists were given an exclusive backstage look at the newly obtained materials, including vials, special shipping equipment and the medical scrubs and ID badge of the New York City nurse who was America’s first coronavirus vaccine recipient.

ATHENS, Greece — Greek authorities have announced a new record high in daily COVID-19 infections for this year, and one of the highest figures since the beginning of the pandemic.

The 3,215 new confirmed infections Tuesday bring the total to nearly 210,000. Another 46 deaths were recorded, raising the overall confirmed death toll to just under 6,900.

About half the new infections were recorded in the greater Athens area, where hospital intensive care units for COVID-19 patients have reached 95% capacity.

Prime Minister Zoran Zaev says the curfew will be effective Wednesday. He also announced Tuesday a two-week mandatory quarantine for all visitors from Africa.

Authorities in the Balkan country of 2.1 million recorded last week a 60% increase in infections over the previous week. Hospitals are filling and most new patients have the U.K. variant.

Inoculations started three weeks ago from a batch of 4,680 doses of Pfizer vaccines donated by neighboring Serbia.

CHARLOTTE, N.C. — Roughly 4 in 10 Americans say they’re still feeling the financial impact of the loss of a job or income within their household as the economic recovery remains uneven one year into the coronavirus pandemic.

The new poll was conducted by The Associated Press-NORC Center for Public Affairs Research. The financial outcome often depended on the type of job a person had and their income level before the pandemic.

The pandemic has particularly hurt Black and Latino households, as well as young Americans, who are now going through their second major economic crisis of their adult lives.

Thirty-eight percent of Hispanics and 29% of Black Americans have experienced a layoff in their household at some point during the past year, compared with 21% of white Americans.

Overall, about a quarter of Americans say they’ve been unable to pay one or more bills in the last month.

Some 745,000 Americans filed for unemployment benefits the week of Feb. 22, according to the Labor Department. Nearly 18 million Americans remain on the unemployment rolls.