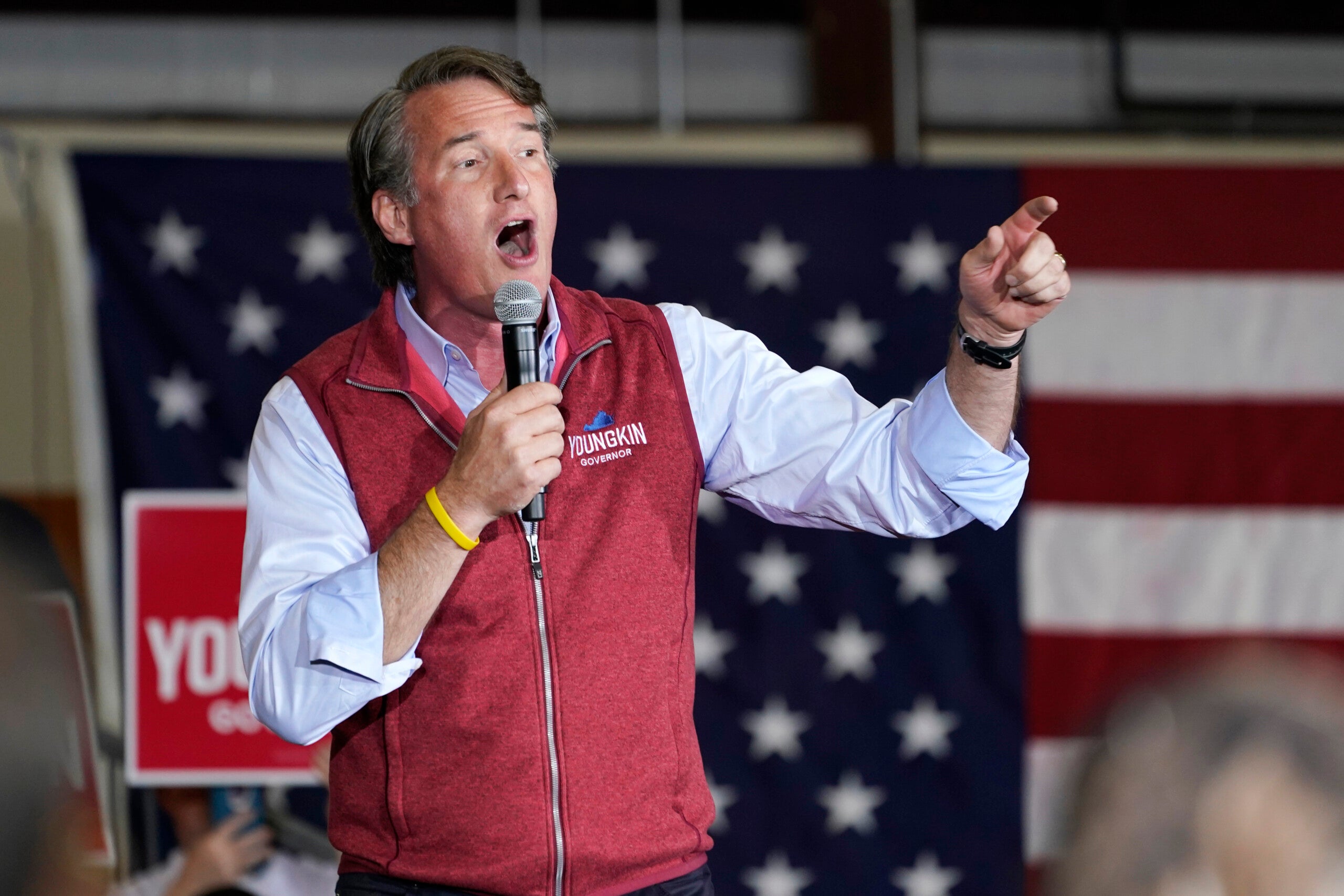 RICHMOND, Va. (AP) — Democrat Terry McAuliffe and Republican Glenn Youngkin were campaigning in many of the same, highly competitive parts of Virginia on Monday, trying to secure last minute support in a governor’s race that has captured national attention as a major referendum on Joe Biden’s presidency.

McAuliffe, who served as governor from 2014 to 2018, is scrambling to stave off disaster after polling has shifted in Youngkin’s direction in recent weeks. Republicans are optimistic about their chances in the commonwealth, where they haven’t won a statewide race since 2009, and where Biden won by a comfortable 10 points just last year.

Elsewhere, New Jersey Gov. Phil Murphy, is trying to secure reelection against Republican former State Assembly member Jack Ciattarelli. If successful, Murphy would be the first Democrat reelected as the state’s governor in 44 years, though New Jersey hasn’t voted Republican for president since 1988.

Mayor’s offices in many of the nation’s largest cities are also up for grabs Tuesday. Democrat Eric Adams, the Brooklyn borough president who is favored to win New York’s mayor’s office, chatted with voters at a subway stop in Queens. His opponent, Republican Curtis Sliwa, planned a news conference with firefighters to protest city mandates requiring firefighters and other city workers to be vaccinated against COVID-19.

A ballot question in Minneapolis, meanwhile, could reshape policing in that community, where the killing of George Floyd last year touched off sweeping demonstrations for racial justice across the nation.

But what happens in Virginia — onetime Republican-leaning territory that has gotten bluer in recent years — promises to have repercussions that may shake both parties.

A McAuliffe win could reassure Democrats heading into next year’s midterm elections, when control of Congress is at stake. An upset by Youngkin, however, would let Republicans say they’ve seized political momentum and don’t plan to relinquish it during the midterms.

Biden’s approval ratings have fallen in recent weeks. And the Democratic-controlled Congress has yet to approve a major public works bill or a sweeping spending package that would dramatically increase government support for the social safety net.

Both McAuliffe and Youngkin were campaigning Monday in greater Richmond, the state capital, whose fast-growing suburbs could swing the race. An energetic crowd of what his campaign said was around 800 people filled a hangar at a small airport for a Youngkin speech that invoked the Founding Fathers.

“This is a moment for Virginians to push back on this left, liberal progressive agenda and take our commonwealth back,” Youngkin said.

The candidates each had stops in Roanoke, and McAuliffe planned a northern Virginia visit for Monday night. Heading that way too was Youngkin, who announced an evening event in Loudoun County, encompassing Washington suburbs that have become the epicenter of parent activist groups who object to school curriculums that include instruction about institutional racism as un-American.

Youngkin has made pledges to ensure parents have greater say in what their kids are taught a centerpiece of his campaign — possibly foreshadowing similar arguments GOP candidates will use across the country in races next year.

The overlapping campaigning locales followed each side working to ensure their most ardent supporters were fired up over the weekend. Youngkin visited the far southwest tip of the state, a Republican stronghold.

McAuliffe, who preceded Democrat Ralph Northam as governor in the only state that doesn’t allow its executive to serve consecutive terms, campaigned in Richmond and northern Virginia, both areas that keyed Biden’s win a year ago, saying of the race, “the stakes are huge.”

McAuliffe has brought in a series of high-profile supporters including President Joe Biden, former President Barack Obama and celebrity musicians Pharrell Williams and Dave Matthews in the final stretch. Youngkin, meanwhile, has eschewed virtually all public campaign visits from well-known party allies who would typically flock to a hot race.

That includes former President Donald Trump, who is holding a telerally on Monday, though Youngkin has said he will not be participating. John Fredericks, a conservative radio host who served as Trump’s campaign chair in the state in 2016 and 2020, said that tens of thousands of participants are expected for “the largest Tele-rally ever.”

“The key to a Republican victory in Virginia rests clearly on the shoulders of Trump voters turning out on game day in massive numbers,” Fredericks said in a statement.

The former president released his own statement alluding to his lies about widespread fraud in the presidential election and saying, “We must win bigger than the margin of fraud by flooding the polls.”

Youngkin more fully embraced Trump during the Republican primary, but since becoming the nominee has walked a fine line as he tries to court moderate voters. In the meantime, McAuliffe has tried relentlessly to tie Youngkin to the former president.

Bennie Pressley, who attended the Youngkin rally, described herself as a “Trump fan” but said she worried that the last-minute Trump appearance could “turn people against Glenn.”

“The country is nuts when it comes to Trump,” she said, adding that she blames many Americans’ dislike for him on the news media.

Early voting in Virginia, which has been dramatically expanded during the past two years of unified Democratic control of state government, ended this weekend. Legislation passed in 2020 eliminated the need to provide one of a certain number of limited excuses to vote absentee — allowing any qualified voter to cast a ballot starting 45 days before the election.

More than 1.1 million out of the state’s approximately 5.9 million registered voters cast early ballots. That’s down sharply from the 2.8 million early votes in last year’s presidential election but marks a dramatic increase compared with the only about 195,000 early votes during the last gubernatorial cycle, before the voting reforms were instituted.

McAuliffe’s campaign has pointed to what it considered “strong” early voting numbers in blue-leaning localities but also says it expects many Democrats to revert to their pre-coronavirus pandemic voting habits this year, preferring to cast in-person, Election Day ballots.

Republicans, despite generally opposing the Democrats’ election reforms, have also encouraged their supporters to vote early this year. Virginia voters don’t register by party, so the partisan split of the early vote wasn’t clear.