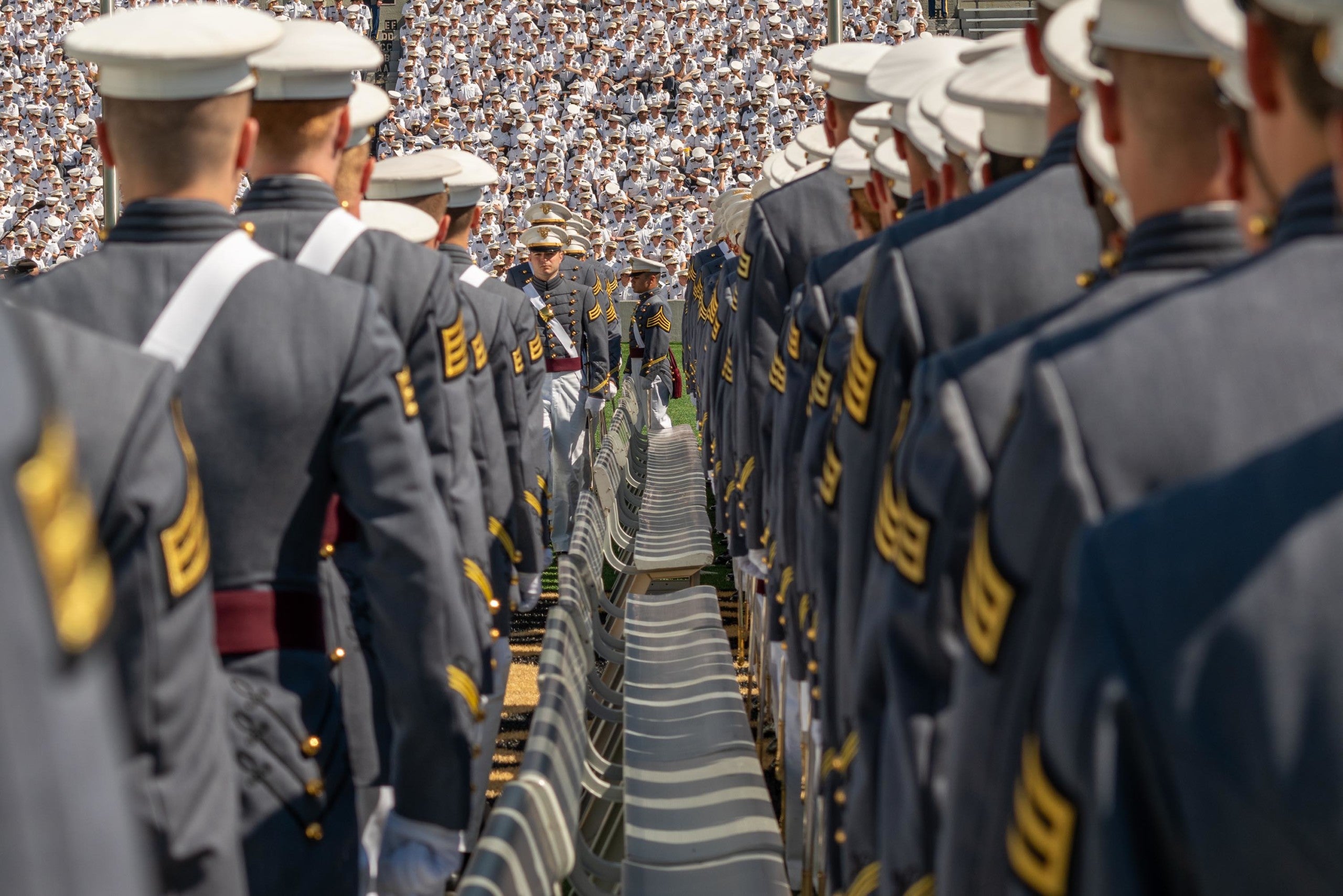 (CNN) — President Donald Trump on Saturday addressed approximately 1,100 graduates who gathered at the US Military Academy at West Point for the annual commencement exercises.

“This premier military academy produces only the best of the best — the strongest of the strong — and the bravest of the brave. West Point is a universal symbol of American gallantry, loyalty, devotion, discipline, and skill,” Trump said, reading from the teleprompter.

“To the 1,107 who today become the newest officers in the most exceptional Army ever to take the field of battle, I am here to offer America’s salute. Thank you for answering your nation’s call,” the President added.

The graduation looked very different from those in years past.

The students were coronavirus-tested and separated into groups of 250 to live, work and eat together for a two-week quarantine leading up to the graduation address.

They were also socially distanced 6 feet from one another Saturday across the Plain Parade Field to accommodate the requirements of Covid-19 protection, instead of at Michie Stadium, the traditional location for the graduation.

Family and friends were not allowed to attend the ceremony but could watch it online.

West Point has made every effort to keep Saturday’s commencement ceremony “as close to normal as possible,” Lt. Col. Chris Ophardt told CNN in an interview Friday.

The graduates will throw their hats into the air when the ceremony concludes, as is tradition, but there will be major changes.

As the graduates march out onto the field, they will wear face coverings, face masks. “They’re seated at about 8-foot intervals across the parade field, so it’s an outdoor ceremony. Once they reach their seats, they will then take their masks off for the rest of the ceremony because they will be practicing social distancing and they’re outside, and they’ve all tested negative,” Ophardt said.

“Instead of being handed the diploma, they will render a salute from a small stage that’s about 15 feet in front of where the President will be standing,” Ophardt said. “So when their name gets read, instead of getting handed a diploma … they’ll step forward and they’ll salute President; President and Lt. Gen. Williams will salute back, and then they’ll leave the stage, and that will be their recognition.”

Traditionally, the students would have their commissioning ceremony the day they graduated, but due to the coronavirus pandemic, they received their commissions digitally and already hold the rank of second lieutenant.

Trump announced in April, surprising many, that he would speak at an in-person graduation ceremony despite the pandemic. Vice President Mike Pence spoke during the Air Force commencement ceremony in April.

Trump said at the time that he was looking forward to the event, adding that though he doesn’t like “the look” of a socially distanced crowd, “eventually, next year, they’ll have a commencement like it’s been … nice and tight.”

CNN reported last week that about 15 students had tested positive for Covid-19 when they returned to campus for commencement, according to an Army spokesperson. None of the infected students were symptomatic, the spokesperson said, adding, “no cadet has contracted through person-to-person contact while under the Army’s care” and that those infected had been isolated.

An Army official said those students have now rejoined their classmates and were expected to graduate on Saturday with the others.

“We’ve been planning for the celebration for a year,” he added. “It was not a reaction to any request for — to move the graduation or anything like that.”

Army Chief of Staff Gen. James McConville, who also appeared on “Today” on Friday, said that Secretary of the Army Ryan McCarthy decided that Trump should speak at the event “with my best military advice, and my advice to the secretary was that the United States Military Academy should have a graduation.”

The move has not come without controversy. Sen. Tammy Duckworth, an Illinois Democrat who’s an Iraq War veteran, criticized the President’s decision to speak in April, urging him to “evaluate the potential consequences of this vanity speech.”

“Trump’s reckless decision to gather 1,000 Cadets at West Point for a speech puts our future military leaders at increased risk — all to stroke his own ego,” she said in a statement. “Our troops need stable, consistent leadership during volatile times like these, not a Commander-in-Chief who values his own photo ops and TV ratings over their health and safety.”

On Thursday, a group of US Military Academy graduates issued a message to the Class of 2020 outlining concerns that “fellow graduates serving in senior-level, public positions” are undermining the credibility of an apolitical military and betraying their “commitment to Duty, Honor, Country.”

Early this week, Williams had a town hall-style meeting with the senior class being invited, in which the superintendent allowed them to raise any concerns they had about what was happening in the world, Ophardt said.