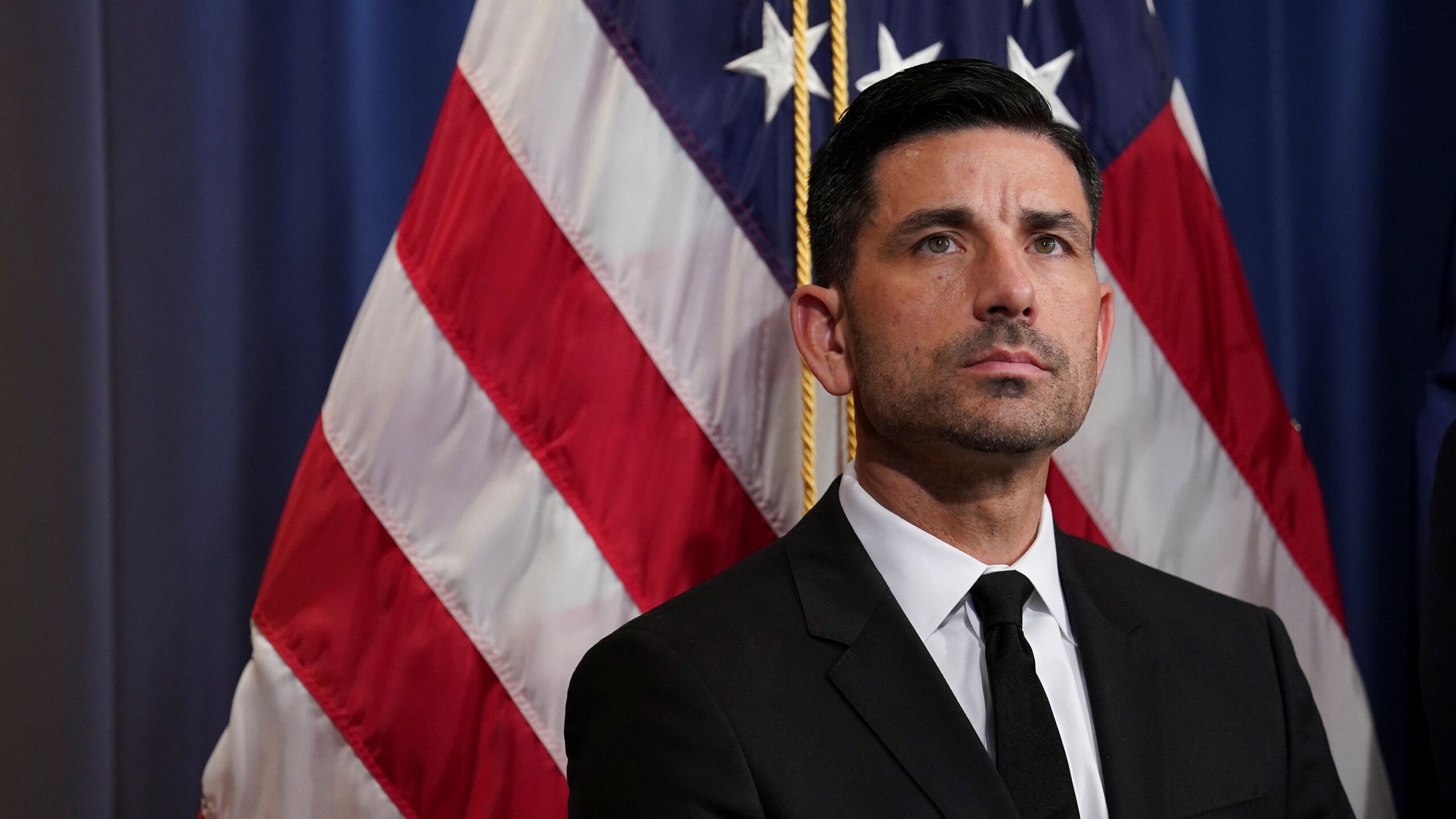 Acting Homeland Security Secretary Chad Wolf looks up during the launch of a new initiative to combat online child sexual exploitation during a news conference at the Department of Justice in Washington, U.S., March 5, 2020. REUTERS/Kevin Lamarque
by: Priscilla Alvarez and Geneva Sands, CNN
Posted: Nov 13, 2020 / 09:39 AM EST / Updated: Nov 13, 2020 / 09:40 AM EST

(CNN) — There’s a renewed push to get Chad Wolf confirmed as Homeland Security secretary — a position in which he’s been serving in an acting capacity for a year — before Inauguration Day, according to two sources familiar with the discussions.

In the past week, Homeland Security officials spoke to Senate Majority Leader Mitch McConnell’s office about bringing the nomination to a floor vote in the coming weeks — a move seemingly acknowledging both a forthcoming change in administrations and criticism that Wolf’s appointment was invalid.

The latest push is emblematic of how the Department of Homeland Security has operated for the last four years. Over the course of Donald Trump’s presidency, DHS — the third-largest federal department — has had five secretaries, only two of whom have been confirmed by the Senate, and has run into a flurry of questions over the legitimacy and authority of those leading in acting capacities.

As leaders came and went, DHS was thrust to the forefront of some of Trump’s most controversial policies, including the “zero tolerance” policy, which led to the separation of thousands of families at the US-Mexico border, and a series of policies that have made it exceedingly difficult for migrants to seek asylum in the US, among other changes to the immigration system.

President-elect Joe Biden’s pick for secretary will inherit a department that has been pounded and dragged into politics; its sprawling mission was overshadowed by Trump’s emphasis on immigration and border security.

“There’s a lot of damage to repair,” one official told CNN.

Since its founding after 9/11, when 22 separate government agencies were combined into one, the Department of Homeland Security has struggled to sort out its complicated management structure and establish itself as an effective Cabinet-level agency, according to a 2018 Government Accountability Office report. It’s also spent the intervening years trying to show itself to be a law enforcement agency on par with the FBI and others.

Despite attempts to appear apolitical, the department has been thrown into the political maelstrom under Trump. This week, two DHS officials were forced to resign by the White House, according to sources familiar with the resignations.

On Thursday, a top official in DHS’ cyber arm resigned, amid a national security shake-up by the Trump administration. Bryan Ware has served as assistant director for cybersecurity at the Cybersecurity and Infrastructure Security Agency. And DHS Assistant Secretary for International Affairs Valerie Boyd also resigned amid pressure from the White House, officials tell CNN.

In recent months, Wolf’s appointment has been cast as invalid by the Government Accountability Office and in federal court, raising concerns that his actions could come under increased scrutiny under the incoming administration.

In August, the GAO, which serves as a government watchdog for Congress, reaffirmed that Wolf and Ken Cuccinelli, the senior official performing the duties of deputy secretary, were appointed as part of an invalid order of succession, despite pushback from DHS. A federal judge in Maryland also ruled that Wolf was likely serving unlawfully.

“To make a long story short, I think the effort to have him confirmed is principally with an eye toward attempting to ratify all of the programs and policies that could be struck down by courts holding his acting appointment was unlawful,” said Steve Vladeck, a CNN legal analyst and University of Texas law school professor.

“From the perspective of a new administration rolling back this administration’s policies, it shouldn’t make a difference whether they’re promulgated by a Senate-confirmed secretary or someone lawfully exercising the duties of the office on an acting basis,” Vladeck added.

McConnell spokesman Doug Andres told CNN on Thursday that there are no scheduling updates or guidance “at the moment.” DHS declined to comment.

Wolf faces questions over his appointment

Wolf serving as head of the department is the result of the consistent, and often abrupt, turnover in the highest ranks of leadership. Previous secretaries tried to accommodate Trump, and then faced the wrath of a President who viewed the department as a political tool to help his reelection.

In his yearlong tenure, Wolf fell in line with Trump’s message of law and order, admonishing Portland, Oregon, over the summer for ongoing civil unrest and traveling across the country in the final weeks of the presidential election to tout the administration’s immigration record.

Current and former Homeland Security officials, meanwhile, warned that the increased politicization of law enforcement risked undercutting public trust in the department. Trump, though, appeared to take notice, name-dropping Wolf during a number of public events and lavishing praise on him.

In late August, shortly after the release of the GAO report, Trump announced his intention to nominate Wolf to serve as Homeland Security secretary — a surprising maneuver given Trump’s preference to have Cabinet officials serve in acting capacities because, he says, it gives him “more flexibility.” A month later, the Senate Homeland Security Committee, in a party-line vote, cleared the way for a Senate confirmation vote.

Senate Homeland Security Chairman Ron Johnson said he was not aware of an effort to get Wolf confirmed beyond the committee’s approval in September.

“Anything we can do to put in place what policies are there would be a good thing to do,” the Wisconsin Republican said, adding “that’d be a good argument for confirming him,” referring to the idea of preserving policies at DHS beyond the Trump administration.

Without confirmation, Wolf’s appointment — and policies rolled out during his tenure — will continue to face questions.

The court uses the word “purportedly” because there is “some doubt whether Wolf was then (and is now) lawfully exercising the authority of Acting Secretary of Homeland Security,” according to the ruling.

In response to the GAO and federal court filings, the department affirmed and ratified previous DHS actions carried out during Wolf’s tenure as acting secretary, according to a Federal Register notice.

The department said the ratification was done “out of an abundance of caution,” given the challenges to his appointment.

‘They need a reset’

Names of possible secretaries under a Biden administration have slowly trickled out, including Alejandro Mayorkas and Lisa Monaco, both of whom served under President Barack Obama and have experience in homeland security.

“They need a reset,” a former Homeland Security official told CNN. “They need a new secretary that says we don’t do politics here.”

Biden does not expect to make any announcements on Cabinet nominations until after Thanksgiving, he has said, with advisers adding that “early December” is the target date.

The first batch of announcements is likely to be for those with health, economic and defense portfolios, officials said, with other Cabinet members possibly delayed until early January, when the outcomes of the expected US Senate runoffs in Georgia are known and it’s clear whether Republicans have maintained control of the Senate.

For months the department has been preparing transition documents for the next administration, but direct contact with the Biden team has been stalled as Trump refuses to concede the election.

If the General Services Administration recognizes Biden as the winner of the election and the President-elect, the transition will move ahead quickly, a department official said.

Mark Koumans, a longtime DHS official who is leading the transition effort for the department, recently reminded staff that until there is a declaration from GSA, personnel should refrain from speaking directly with members of the Biden team and continue to go through the department’s transition office, a department official told CNN.