Trump looks to reelection with campaign-themed State of the Union 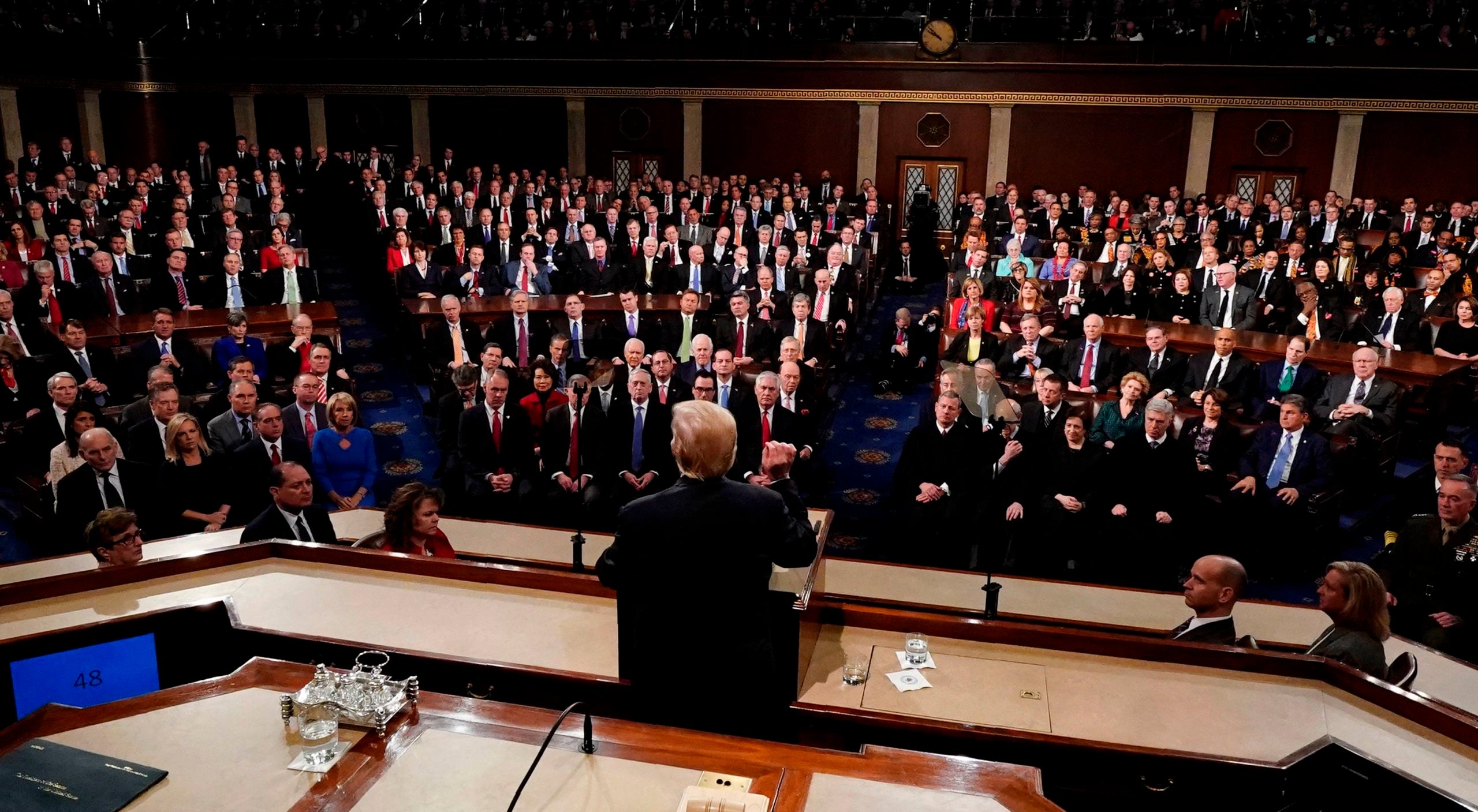 (CNN) — With the Senate on the verge of an impeachment vote expected to keep him in office, President Donald Trump used Tuesday’s State of the Union address to implore Americans to do the same.

Trump delivered an speech heavy on themes he hopes will fuel his reelection in November in the very same House chamber where he was impeached late last year. He addressed a Congress that remains bitterly divided over whether he committed high crimes and misdemeanors in his effort to pressure Ukraine into investigating a political rival.

The timing — sandwiched on a day between the chaotic Iowa kickoff of Democrats’ presidential nominating contest and the expected conclusion of the five-month impeachment saga — imbued the 2020 version of the yearly speech with drama often missing from the annual ritual.

From the start, the specter of impeachment loomed. When House Speaker Nancy Pelosi — with whom Trump hasn’t spoken in months — extended her hand to greet the President, he turned away and left her hanging. She smiled broadly as she glanced toward her Democratic caucus and shrugged.

Trump also salted his address with dramatic surprises. In an move without recent precedent in a State of the Union, he awarded the Presidential Medal of Freedom to cancer-striken conservative radio host Rush Limbaugh, seated in the gallery above the floor. He introduced the man the US considers the rightful President of Venezuela, Juan Guaidó, in a rare moment of bipartisan applause. And he informed a young student that a scholarship had become available for her to attend a better school.

Those moments helped Trump avoid the unspoken drama in the room: the still-lingering impeachment, which is set to conclude in acquittal on Wednesday. Aides insisted ahead of time Trump would bypass mention of the impeachment, and he did not surprise them with any angry asides, despite his festering resentment.

Instead, Trump touted economic achievements he claims have restored the nation’s standing.

“In just three short years, we have shattered the mentality of American Decline and we have rejected the downsizing of America’s destiny,” Trump said, using the national address to again undermine his predecessor, under whom the US economy began its recovery after the 2008 financial crisis. “We are moving forward at a pace that was unimaginable just a short time ago, and we are never, ever going back!”

While Trump likes to claim he inherited a weak economy, the job gains and economic growth he trumpets began under President Barack Obama. And last week the government reported the US economy in 2019 grew at its slowest pace in three years.

Still, Trump remains bullish in his economic assessment, which he believes will prove convincing to voters this year.

“The vision I will lay out this evening demonstrates how we are building the world’s most prosperous and inclusive society — one where every citizen can join in America’s unparalleled success, and where every community can take part in America’s extraordinary rise,” Trump said.

Trump did not deliver overt criticism of any potential rival from a crowded Democratic field. But he did warn against a “socialist takeover of our health care system,” an implicit rebuke of democratic socialist Sen. Bernie Sanders, who emerged in a strong position from the messy Iowa caucuses.

“To those watching at home tonight, I want you to know: We will never let socialism destroy American health care!” Trump said.

A meltdown in reporting the results of Monday’s Iowa Democratic caucuses deprived any one candidate of a momentum jolt heading into Tuesday.

Earlier Tuesday, a Gallup poll showed Trump reaching the best numbers of his presidency, with 49% of respondents approving of his job performance and 50% disapproving.

He also made dubious claims like a commitment to protect health insurance for Americans with pre-existing conditions. Though Trump says he would do this, his administration has consistently taken steps to undermine the Affordable Care Act — including joining a lawsuit aimed at striking down the law — without presenting alternative plans that would offer similar benefits.

Trump hopes to convince one of the year’s biggest television audiences that his ideas and record warrant another four-year term, despite having been only the third president in US history to be impeached.

Trump and his aides once hoped to use the speech as a victory lap of sorts following an acquittal vote. But a procedural compromise extended the trial into another week and now a final vote on the two impeachment articles won’t come until Wednesday afternoon.

While he wasn’t the first to address Congress mid-trial — President Bill Clinton delivered his 1999 State of the Union just as arguments were getting underway — Trump will be the first president to be impeached before facing voters, lending an unpredictability to the coming campaign. The themes laid out on Tuesday are expected to form the core of his message in the coming 10 months.

Trump spent part of the weekend preparing for the speech, which a team of speechwriters has been drafting for months. Typically, White House aides solicit recommendations from across the administration for ideas to include in the speech.

Trump offered his own themes and specific lines that were included in Tuesday night’s address, often scrawling them out in Sharpie on pieces of paper that are then delivered to his writing team. He was expected to rehearse his delivery from the White House basement earlier in the day.

It’s Trump’s third State of the Union speech and his fourth address to a joint session of Congress.

Before he spoke, the White House announced a roster of guests meant to underscore Trump’s message: a former addict who has benefited from one of the administration’s “opportunity zone” job training programs; the deputy chief of the US Border Patrol; a fourth-grade student and her mother from Pennsylvania who the White House says were negatively affected by legislation in the state; a mother and son whose father was killed by a roadside bomb the White House says was supplied by slain Iranian commander Qasem Soleimani; and a former police chief in Venezuela who was imprisoned for years in the country before escaping to Florida.

In the days leading up to the speech, Trump flashed anger at Democrats for impeaching him, downplaying the prospects he’d be able to work across the aisle in the year ahead.

“It’s pretty hard when you think about it,” Trump told Fox News. “I’m not sure that they can do it, to be honest. I think they just want to win. And it doesn’t matter how they win.”

Republicans in Congress — who comprised Trump’s audience on Tuesday along with Democrats, members of the Cabinet, Supreme Court justices and foreign ambassadors — had hoped for a speech that avoids mention of impeachment, even if they aren’t entirely confident it won’t.

“If I were him I’d avoid that subject. There’s plenty to talk about and it’s time to move on,” said Sen. Roy Blunt, a Republican from Missouri. “But the other option is to address it head-on and he often is a head-on kind of guy.”

“It’s just not what I would do. But Donald Trump’s Donald Trump. He’s the only Donald Trump we know, and I suspect he’ll be himself,” said Sen. Kevin Cramer of North Dakota.

“I mean, I wouldn’t,” said Sen. Marco Rubio, before acknowledging: “It’s his State of the Union.”