Trump speech to project optimism at time of bitter division 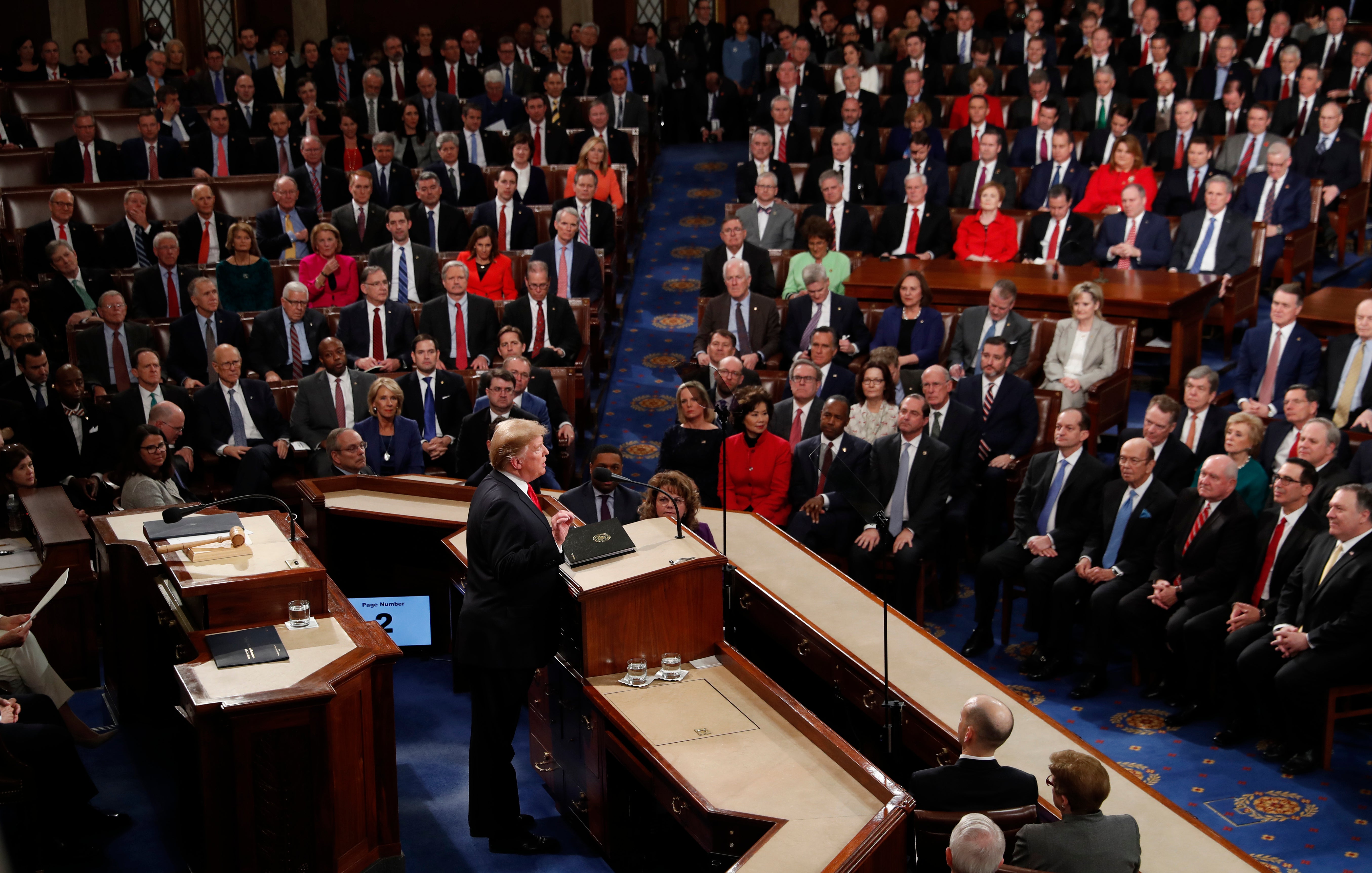 WASHINGTON (AP) — Standing before lawmakers in the grand-domed Capitol where his impeachment trial is still underway, President Donald Trump on Tuesday night will declare the state of the union strong, even when it is bitterly divided as he asks Americans for a second term.

After becoming just the third president in U.S. history to be impeached, Trump will try to move forward, aides say, offering an optimistic message that stresses economic growth in his annual address before Congress.

But the impeachment drama will hang over him as he stands before the very lawmakers who have voted to remove him from office — and those who are expected to acquit him Wednesday when the Senate trial comes to a close. A ny attempt to try to be a messenger for unity will surely be dismissed at a time of palpable anger and rancor, much of which he has helped generate on both sides of the divide.

Senior administration officials were tight-lipped about the extent to which Trump would mention h is impeachment, which he has denounced as a “witch hunt” orchestrated by Democrats to try to undo the results of the 2016 election and harm his reelection chances this November. They stressed this his prime-time speech was still a work in progress.

But they said Trump sees the speech as an opportunity to talk about moving the country ahead, contrast his vision with Democrats’ and try to make the case to voters that he deserves four more years in the White House.

“This has been a very partisan process and this is an opportunity for him to unify the country around opportunities for all Americans,” said White House spokeswoman Jessica Ditto.

Trump will spend much of the speech highlighting the economy’s strength, including the low employment rate, stressing how it has helped blue-collar workers and the middle class. A focus will be the new trade agreements he has negotiated, including his phase-one deal with China and the United States-Mexico-Canada agreement he signed last week.

It’s a familiar message to anyone who has ever tuned into one of the president’s rallies. But it’s one the White House believes will reach a broader audience and have a more potent impact given the venue, especially among independent voters. His campaign has been courting these voters as it works to stitch together a winning coalition for his reelection.

“Once again, it will present that opportunity for the American people to see how much has been done that not necessarily has been showcased,” said Ditto. “This is one of the president’s best opportunities to talk about his record unfiltered with a captive audience.”

The speech will include a section on health care. Aides say Trump is expected to go after what one official described as the “radical proposals being floated on the left,” including the call by some Democratic presidential candidates for “Medicare for All.” He will highlight efforts to reduce drug prices, end surprise medical billing and tackle the opioid epidemic, urging members of Congress to pass legislation to back his efforts.

Trump promised voters in 2016 that he would offer a health plan that was better and cheaper than President Barack Obama’s Affordable Care Act, which his administration has tried to gut. Trump has yet to offer any detailed alternative.

While the White House said the president will have message of unity, he will also spend time on issues that have created great division and resonated with his political base. He will again highlight his signature issue — immigration — trumpeting the miles of border wall that have been constructed. He will once again excoriat e “ sanctuary cities” as dangerous criminal haven s.

He will again dedicate a section to “American values,” discussing efforts to protect “religious liberties” and limit access to abortions as he continues to court the evangelical and conservative Christian voters who form a crucial part of his base.

In addition, he will press Congress to pass legislation encouraging alternatives to traditional public schools and highlight passage of mandatory paid leave for federal workers. He will try to make the case that the U.S. government is leading by example and send a clear “signal” to the private sector to follow suit, one aide said.

He also will discuss foreign policy and national security at length.

Throughout his remarks, House Speaker Nancy Pelosi, who led the impeachment charge, will sit over Trump’s shoulder as a constant presence. Last year, the California Democrat created a viral internet meme with a an enthusiastic “clap back” gesture.

The audience will include Democrats such as California Rep. Adam Schiff, who prosecuted much of the impeachment case against Trump on grounds that he obstructed Congress and abused his office by trying to pressure Ukraine to investigate a Trump political rival and by withholding crucial security aid.

Administration officials were coy when asked whether Trump intended to call specific members out.

The acrimony, while heightened, is nothing new.

Last year, Pelosi went so far as to disinvite Trump from appearing in the House chamber in the midst of a bitter border wall battle and the longest government shutdown in the nation’s history.

Yet Trump made no direct reference to the shutdown in the speech he eventually delivered to a newly divided Congress. He used his addressto call for a “new era of cooperation” and urge lawmakers to “choose greatness” and “govern not as two parties, but as one nation.”

“We must reject the politics of revenge, resistance and retribution — and embrace the boundless potential of cooperation, compromise and the common good,” Trump said at one point.

The 82-minute speech was also punctuated by several unexpected shows of unity, including when women House members dressed in white joined their counterparts in a “USA!” chant after Trump noted the record number of women in Congress.

Still, there were plenty of subtle digs, including when Trump warned those gathered against pursing “foolish wars, politics, or ridiculous partisan investigations.”

In past years, the White House has tried to connect with audiences at home by highlighting the stories of guests invited to the speech. In 2018, the world watched as a North Korean defector, who had survived being run over by a train, stood and waved his crutches in the air in a triumphant, made-for-TV moment. Last year, the guest list featured several veterans who had taken part in the D-Day invasion as well as astronaut Buzz Aldrin.

This year, the White House is expected to offer similar recognition f or America’s heroes — though Conan, the “hero dog” that played a role in the raid that killed Islamic State leader Abu Bakr al-Baghdadi is not expected to make an appearance.

Trump will also be continuing the tradition of hitting the road after the speech. He will travel to North Carolina Friday for a summit focused on jobs and workforce development, while Vice President Mike Pence heads to Pennsylvania on Wednesday for an event promoting school choice.