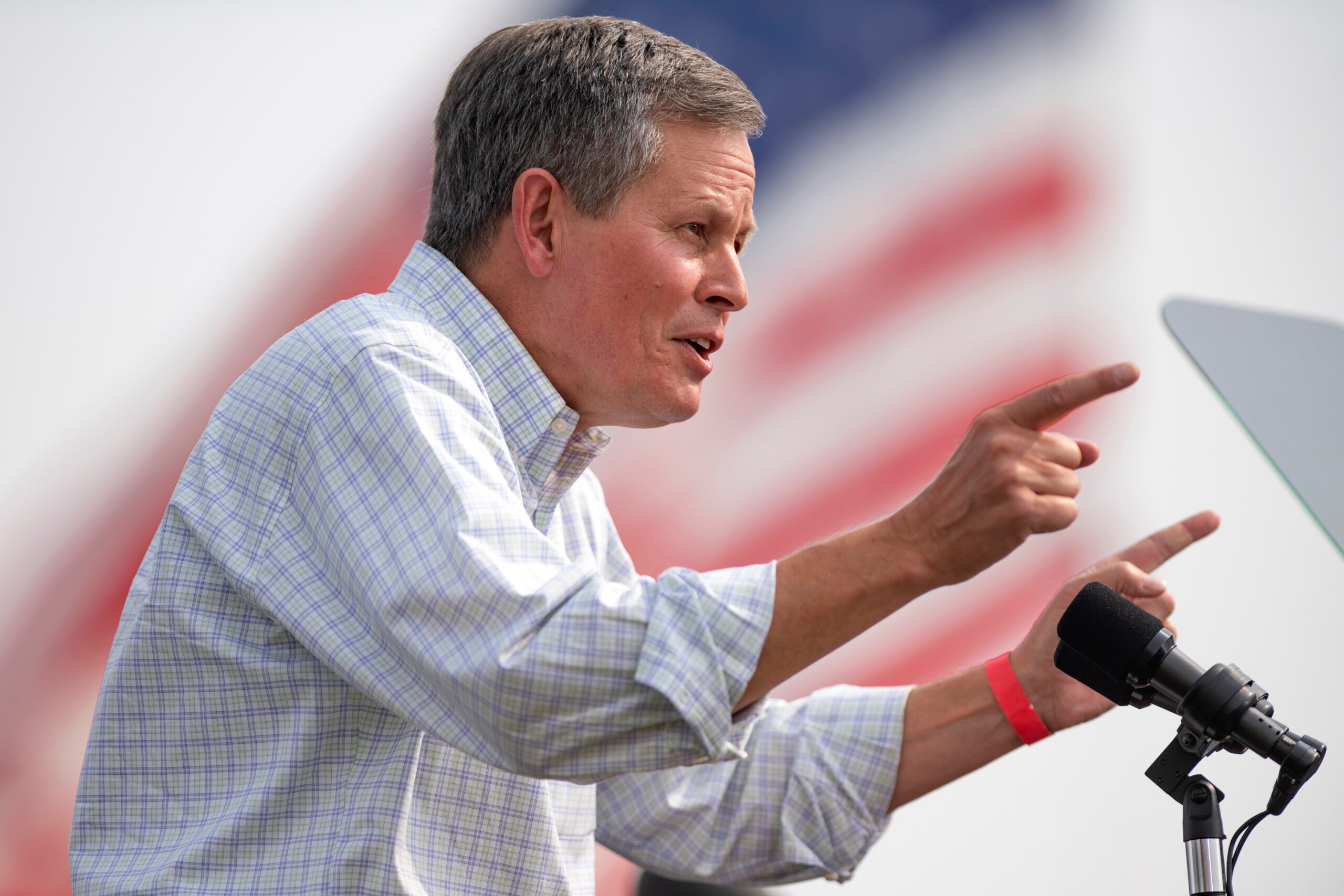 FILE - In this Sept. 14, 2020, file photo, Sen. Steve Daines, R- Mont., speaks to a crowd of supporters at a Republican campaign rally in Belgrade, Mont. Incumbent Republican Daines faces off Saturday, Oct. 10, 2020, in the last of three debates against his Democratic opponent, Montana Gov. Steve Bullock, in a race that is among the GOP-held seats in states won by President Trump in 2016 that Democrats think they have a chance to flip in November. (AP Photo/Tommy Martino, File)
by: MATTHEW BROWN and AMY BETH HANSON Associated Press
Posted: Oct 14, 2020 / 01:27 PM EST / Updated: Oct 14, 2020 / 01:28 PM EST

BILLINGS, Mont. (AP) — Political groups fighting for control of the U.S. Senate have poured more than $118 million into the contest between Montana’s Democratic Gov. Steve Bullock and Republican incumbent Steve Daines, a record shattering figure for the sparsely-populated state that dwarfs spending on a per-voter basis in all other Senate battleground states.

The cash deluge comes amid growing Republican worries they could lose control of the chamber, and as Democrats seek to reverse a years-long GOP surge in Montana including President Donald Trump winning the state by more than 20 percentage points in 2016.

For residents of Big Sky Country it means an unrelenting barrage of advertisements any time they turn on their computers, televisions and radios or open their mailboxes.

That’s set to persist through the final weeks of the election with another $22 million teed up for television, radio and digital ads targeting a fast-shrinking pool of undecided voters, according to data from the ad-tracking firm Kantar/CMAG.

By the time it’s over, the two campaigns and outside groups that span the political spectrum — from the NRA Victory Fund to Planned Parenthood — are expected to spend a combined $184 on advertising for each of the state’s 729,000 registered voters.

That figure does not include $6 million for mailers, door-to-door canvassing and other expenses that show up on Federal Election Commission filings from the groups.

The tally far exceeds the roughly $100 on ads per voter in Maine’s hotly-contested battle for the seat held by Sen. Susan Collins, a Republican moderate challenged by Maine House Speaker Sara Gideon.

And the Montana political ad spending is almost 10 times as much per voter being spent on ads in Colorado’s Senate contest between former Democratic Gov. John Hickenlooper and first-term Republican incumbent Sen. Cory Gardner.

Both Montana candidates are popular and familiar to the state’s voters. Bullock, a 54-year-old native of the capital, Helena, is coming off a second term as governor following two terms as Montana attorney general.

Daines, 58, grew up in Bozeman and was an executive at a high-tech company. He served one term in Congress and cruised to victory in a 2014 Senate race.

“Usually incumbents have the natural advantage. In this race there are essentially two incumbents,” said AshLee Strong, who served as a senior adviser and spokeswoman for former House Speaker Paul Ryan and now runs a Montana public relations firm.

One reason for the heavy ad spending is Montana’s sprawling size, where just 1 million residents are spread out in a state larger than Germany, said Kathleen Hall Jamieson, director of the Annenberg Public Policy Center at the University of Pennsylvania. The media market is split into different regions tied to cities such as Billings, Great Falls, Missoula and Helena.

But the main driver is the race’s competitive nature and the high stakes in the Senate. Republicans hold a slim 53-45 majority in the chamber and two independents caucus with the Democrats, meaning they need just a few seats to take control. They’re hoping for wins in other states including Georgia, Arizona, North Carolina and Iowa.

The Iowa and North Carolina races are expected to have the most ad spending outright — at least $167 million each, according to Kantar/CMAG.

Democrats had the Montana Senate seat for more than a century prior to Daines, who won it after Bullock’s former lieutenant governor John Walsh, was forced to drop out late in the 2014 race amid allegations he plagiarized parts of a thesis paper while at the U.S. Army War College om 2007.

Democrats have outspent Republicans on ads by about $11 million — a gap that’s expected to widen in the race’s final weeks, according to the Kantar/CMAG data.

Daines’ campaign has responded by issuing increasingly urgent pleas to potential donors and warnings that Bullock’s voter support in polls is surging.

“We’re starting to get worried,” Daines said in an emailed fundraising solicitation on Tuesday.

Bullock made campaign finance reform a key piece of his failed bid for the Democratic 2020 presidential nomination. As governor he signed a measure to increase spending transparency in state elections.

During debates with Daines, he’s railed against the large donations received by the Republican from political action committees backed by the oil industry, pharmaceutical companies and other corporate interests.

“I don’t think Senator Daines has ever met a corporate PAC that he doesn’t like,” Bullock said during a recent televised debate.

Daines paints Bullock as a hypocrite, pointing out that the Democrat has benefited from outside spending and helped funnel money into races across the country when he chaired the Democratic Governors Association.

The candidates’ campaigns account for less than half the money spent on ads to date. The rest comes from more than two dozen groups, with the Republican-affiliated Senate Leadership Fund and the Democratic Senatorial Campaign Committee as the two biggest spenders.

The Annenberg center’s Jamieson, whose grandmother homesteaded in Montana, noted that political ads have a long history in the state.

A famous one from the successful 1982 Senate campaign of Democrat John Melcher featured talking cows insulting out of state “city slickers” spending against him in the race.

Jamieson would like to believe the rural state could be spared the huge volume of intrusive advertisements from interest groups that have become a staple of modern politics, but acknowledged that’s not the case.

“We’ve now so normalized outside-state money coming into states that it isn’t an issue anymore and it happens on both sides,” she said.