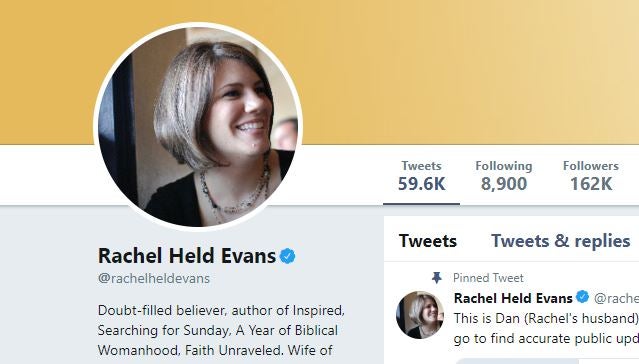 (WISH) — After two weeks in a medically induced coma, influential Christian writer and speaker Rachel Held Evans died Saturday at the age of 37.

Former President Barack Obama chose Evans in 2012 to be part of his President’s Advisory Council on Faith-Based and Neighborhood Partnerships.

Evans was hospitalized in April with the flu and a UTI and then suffered a severe allergic reaction to antibiotics. Her husband, Dan Evans, told Slate that she then developed sustained seizures, leading doctors to put her in a medically induced coma.

When doctors tried to wean Evans off the medications keeping her in a coma, her seizures worsened, and her medical team found severe swelling of her brain, her husband told Slate on Saturday.

In a May 4 update on Evans’ blog, her husband wrote that “Rachel’s presence in this world was a gift to us all and her work will long survive her.”