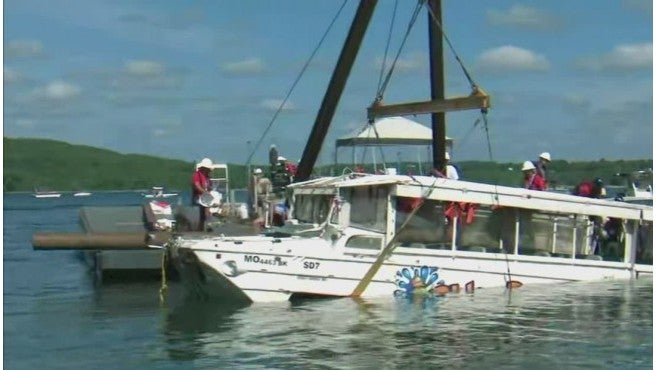 KANSAS CITY, Mo. (AP/WISH) — The U.S. Coast Guard has found probable cause that the sinking of a tourist boat on a Missouri lake last month that killed 17 people “resulted from the misconduct, negligence, or inattention to the duties” by the captain of the boat, according to a court motion filed Wednesday by federal prosecutors.

At least nine of the 17 killed were members of the Coleman family of Indianapolis.

The U.S. attorney’s office also said in the motion that the captain of a second duck boat that made it safely to shore when the storm kicked up on Table Rock Lake near Branson on July 19 acted in a “grossly negligent manner.” The filing doesn’t elaborate on those findings.

In the motion, prosecutors asked Kansas City federal court to issue an order that would delay attorneys involved in lawsuits related to the sinking from sharing information and evidence they gathered until the criminal investigation is complete.

Three federal lawsuits have been filed in the Western District of Missouri against the duck boat operators, including Ripley Entertainment, which owned the Ride the Ducks attraction at the lake.

U.S. Attorney Timothy Garrison and assistant U.S. attorneys Randall Eggert and Casey Clark argue in the motion that much of the same evidence, documents and witnesses will be part of the criminal investigation and lawsuits. They contend that attorneys in the lawsuits are not entitled to know the substance of the government’s case while the investigation is underway and sharing of some evidence could undermine the criminal case.

They say the criminal case takes precedence over civil matters because of the public’s interest in knowing if criminal conduct led to the tragedy. The Coast Guard referred the investigation to federal prosecutors on Aug. 13. No criminal charges have been filed.

Robert Mongeluzzi, whose Philadelphia-based law firm has filed two lawsuits on behalf of relatives of nine members of the Indianapolis family who died on the boat, said Wednesday that the firm supports efforts to bring justice, including possible criminal prosecution, to those responsible for the tragedy. But he said his firm doesn’t believe a stay of all civil proceedings is warranted and plans to file a response to explain why the civil cases can proceed without hurting the criminal prosecution.

Prosecutors say their investigation involves people named in the lawsuits and others, including Capt. Kenneth McKee, who was piloting Stretch Boat 7, which sank, and Capt. Barry King, who was piloting Stretch Duck 54, which made it safely to shore. McKee didn’t immediately reply to a call seeking comment. A woman who answered King’s phone said he had been advised not to talk to the media.

Ride the Ducks of Branson offers tours that first drive on land before entering the lake for nearly 20-minute ride. Video and audio recovered after the boat sank showed the lake was calm when the boat went into the water but severe winds up to 70 mph began blowing suddenly and one boat, carrying 31 people, sank within minutes.

In the lawsuits, attorneys contend the duck boat operators ignored weather warnings that day and had long ignored consultants and others who said the boats’ design was dangerous and should be changed.