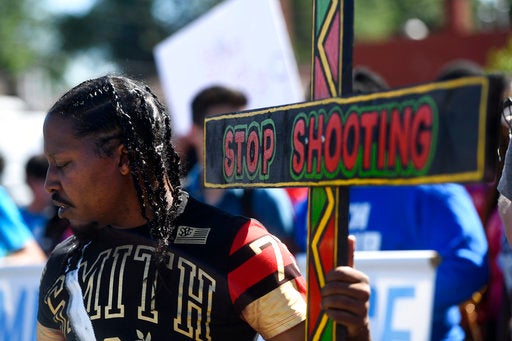 CHICAGO (AP) — An angry crowd gathered Saturday evening after a Chicago police officer fatally shot a man on the city’s South Side, and some protesters scuffled with police.

Chicago Police Department spokesman Anthony Guglielmi said the shooting happened when officers on foot in the South Shore neighborhood tried to question a man “exhibiting characteristics of an armed person.”

Larry Merritt, a fire department spokesman, said the man was taken to Jackson Park Hospital, where he was pronounced dead.

No police officers were injured, Guglielmi said. A weapon was recovered at the scene, he said, but did not say whether the man was armed when he was shot.

A scuffle later broke out at the scene of the shooting between chanting protesters and police officers holding batons. Video showed several police officers and protesters shoving each other. The Chicago Sun-Times said a few protesters were taken away by police.

After nightfall, protesters continued to mill around the neighborhood with police occasionally chasing them away. Protesters shouted insults at the police and threw some bottles at them. Video showed one protester thrown to the ground surrounded by police holding batons.

Chicago has a troubled history of police shootings. The city erupted in protest in 2015 after the release of a video showing white police officer Jason Van Dyke shooting black 17-year-old Laquan McDonald 16 times in 2014. Van Dyke was charged with murder. McDonald’s death led to the ouster of the police chief and a series of reforms designed to prevent future police abuses and to hold officers accountable for excesses.