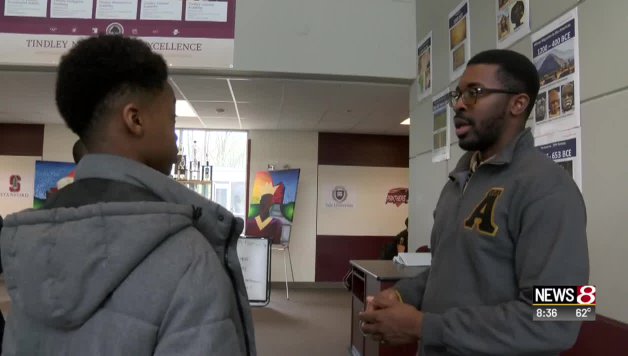 INDIANAPOLIS (WISH) – It’s only a matter of time before Terrell Glenn achieves his doctoral degree in engineering.

However, he noticed that in his lab group there was a shortage in people that looked like him.

“Not only am I the only American, I’m the only African-American in my lab group,” he said.

Now he’s on a mission and not just for his own career.

He wants to bring more African-Americans into the same field he chose at a young age.

Kids from 5th grade all the way up to high school seniors got a chance to showcase their skills and test their theories in Science.

They tackled topics anywhere from global warming to breaking down why too much coffee is bad for your teeth.

Their projects were judged by professionals in the field who also gave advice on how they could go even further with their ideas and their research.

Glenn says when it comes to helping kids in the community tap into another way of thinking it’s all about one thing: exposure.

“[It] helps kids standout and show their talents cause a lot of kids like to hide their talents,” Tindley Collegiate Academy 8th grader, Malia Lomax said.

Glenn plans to hold more STEAM events throughout the year at different schools throughout Indianapolis and eventually produce a scholarship for kids interested in pursuing careers in the STEAM field.

You can find links to sign up for STEAM summer workshops here and here.