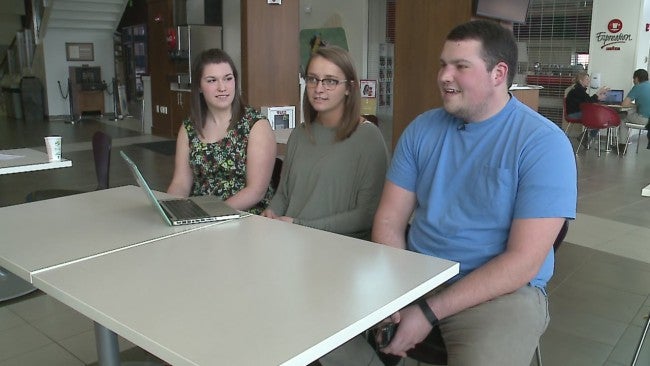 WEST LAFAYETTE, Ind. (WISH) – Several Purdue University students said they feel lucky to be alive after learning of the terror attacks in Brussels, Belgium. The group of tourism and hospitality management majors had just wrapped up a study abroad trip in Europe for spring break, which included stops in Luxembourg and Brussels.

They returned from Belgium Sunday, two days before the explosions that killed dozens of people. They were also in Brussels as police arrested the terror suspect in the Paris attacks.

Even as that happened, they say they always felt safe.

It was a trip of a lifetime.

“We did a lot of food and beer and wine tasting,” said senior Maggie Lengacher as she described how they studied European cuisine. They also got to meet and befriend several people, the same people they now hope are safe.

“The guy who took my luggage and put it on the cart or even just the people we met at the cheese place in the first day. Were they leaving the country, going on the plane that day,” Lengacher wondered.

“To know we were just standing in that spot that you see on TV with all this damage and wreckage it was just it was just shocking,” said senior Kendall Crow. “I didn’t have a lot of words.”

“It was in the exact area we were just waiting to get checked at customs,” added Lengacher. “It was just awful.”

That shock was only magnified by the fact that the students said it was hard to go anywhere in the airport without seeing armed guards or security.

“There’s all of these military personnel walking around like it’s extremely safe, there’s nothing to worry about and it’s like, well how did that even happen,” questioned senior Matt Sampson.

The students said the ironic part about the military presence was that they felt the airport’s security checkpoints were much more relaxed compared to airports in the U.S.

The group said at O’Hare Airport in Chicago they were asked to remove their shoes, belts, jewelry and more at one checkpoint.

“I remember when we were leaving Brussels several people made comments like ‘this was so fast, we went straight through, we didn’t even need to take off our shoes’,” said Sampson.

All day Tuesday, the group said they’ve been getting texts and calls from concerned friends and family. Many had no idea if the students had even returned from Europe yet.

Luckily they are back from a trip that at one point they wished wouldn’t end, but now couldn’t be more grateful that it did.

Crow said the attacks are a learning lesson that terror can strike anywhere saying, “You always think ‘oh it’s across (the ocean), we don’t really have to worry about it, it’s sad for all those people.’ But now you realize it’s terrifying. Like it is so sad for those families and their friends of the people, I mean they have to live in that kind of fear.”

“These attacks are meant to (instill fear),” said Sampson. “For me like you can’t live your life in fear of something that could possibly happen because, one, you’re letting them win by doing that and letting that affect your life.”