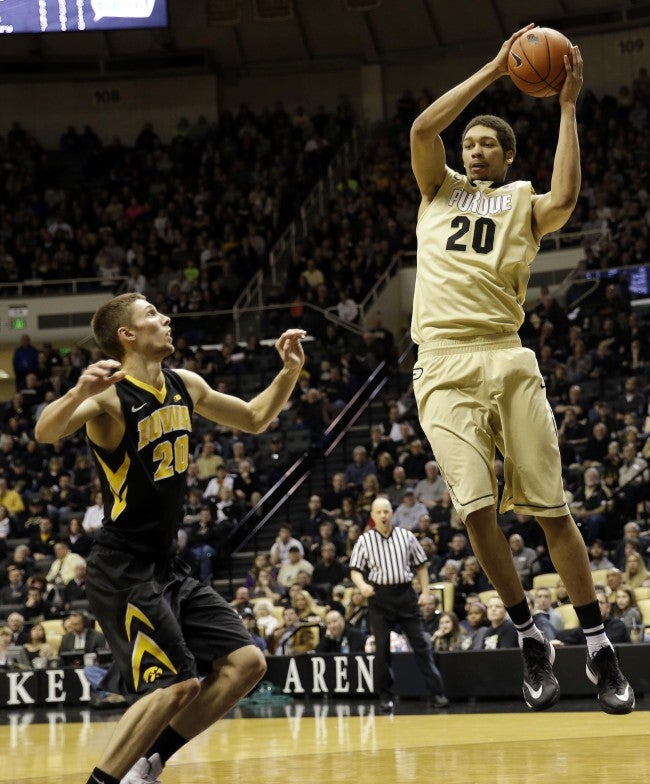 WEST LAFAYETTE, Ind. (AP) – Rapheal Davis had just enough going his way to be a nuisance for No. 25 Iowa, but he isn’t looking for the credit.

Davis scored 16 of his 24 points in the first half to lead the Purdue Boilermakers to a 67-63 victory over the Hawkeyes on Saturday.

“I made some baskets,” Davis said. “But without Basil (Smotherman) playing the game he did, I don’t think we win.”

Smotherman made a couple of free throws with under a minute to play to help keep the Boilers ahead. And after Wednesday’s 66-57 loss at Illinois, he wanted to find ways to be effective.

“The practices we had after the Illinois game, we were hustling,” Smotherman said. “At Illinois, we really didn’t hustle. We made the hustle plays today.”

He finished with six rebounds and had no problem throwing himself after loose balls, including one that sent him into the Purdue bench and another where he landed on the scorer’s table.

Mike Gesell scored 18 points and Gabriel Olaseni finished with nine points and 16 rebounds for the Hawkeyes (13-7, 4-3).

Davis made the go-ahead 3-pointer to give Purdue a 65-63 lead with less than a minute remaining and the Boilermakers held on the rest of the way.

Gesell scored to give the Hawkeyes a 63-62 lead at the 1:18 mark before Purdue took the lead for good.

The Hawkeyes played much of the game without Aaron White, who left the game with a right shoulder injury in the first half.

White said it felt like he broke his collar bone when he collided with Smotherman while going after a loose ball at the 15:48 mark.

He returned to the bench when he was knocked in the shoulder again a few minutes after returning to the game.

“I was in a lot of pain,” he said. “I tried to go back in after it happened, thinking that if I got back loose it would loosen up and I could help the time. But I reached for the ball and had a popping feeling and pain down my neck, but I’ll be alright.”

Gesell scored 10 points in a row for Iowa late in the second half, including a shot to make it 62-61 late in the game before he scored to take the lead.

“In the second half, I was just looking to be aggressive,” Gesell said. “I think we did a great job down the stretch. Davis just hit a big-time shot.”

Not much has been going Iowa’s way lately, starting with Tuesday’s 82-50 loss at Wisconsin.

And on Saturday, Purdue took advantage.

The Boilermakers went on an 8-1 run to jump to a 30-20 lead when Smotherman scored on a breakaway dunk with 3:19 remaining in the opening half.

Iowa: The Hawkeyes entered the game as the Big Ten’s top offensive rebounding team with 12.7 per game. Iowa surpassed its average and totaled 15 offensive boards at the break and finished with 24 – the most since the Hawkeyes grabbed 18 against Hampton in the season opener.

Purdue: Kendall Stephens, who started 16 games this season, came off the bench after suffering a left pinkie injury in a 66-57 loss at Illinois on Wednesday. Stephens leads the Boilermakers in scoring and was a game-time decision. With the injury, Purdue used its sixth starting lineup of the season.

Iowa will host Wisconsin next Saturday.

Purdue is No. 2 in the Big Ten with 5.3 blocks a game and A.J. Hammons leads the league with 2.6. He finished with one block against Iowa and it couldn’t have come at a better time. Hammons sent the ball flying when Gesell drove to the basket late in the game with a chance to give the Hawkeyes the lead.