Race fans not bothered by heightened security at IMS 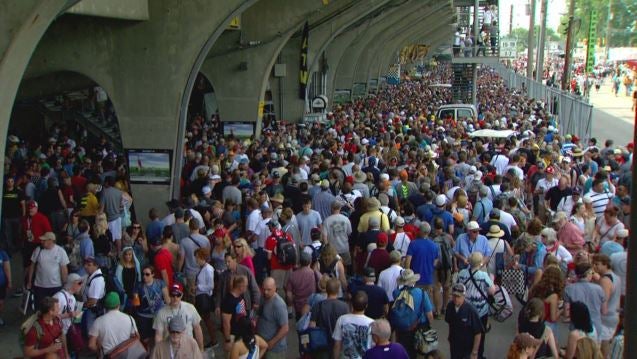 SPEEDWAY, Ind. (WISH) – The millions of dollars of renovations to the Indianapolis Motor Speedway isn’t all that will be new to fans this weekend.

Security and safety have been increased to levels never seen before.

The first difference fans will notice is that it will likely take considerably longer to get down roads like 16th Street, Georgetown Road, and 30th Street.

Part of that is because of the huge crowd. The other part: the new security features designed to keep all those people safe.

It’s the calm before a historic storm outside IMS.

“The wind comes and goes,” said Stephen Albright as he and a buddy fly a kite through the mostly empty Coke Lot. But they know it won’t last for long.

“In my mind, I can just see it absolutely jam packed. It’s going to be absolutely madness,” Albright joked.

Keeping that chaos under control is exactly what officials at IMS plan to do the for the 100th running of the Indy 500.

“It’s just really important that you come early, that you plan how you’re gonna do it when you come here, and that you’re very patient throughout that process,” said IMS President Doug Boles.

If you’re planning on bringing a bag or cooler to the race, expect longer wait times because ESG Security, not the yellow shirts, will be doing a more thorough search. But if you’re not bringing any of those items, then you can go in the Express Lane which will get you into the track much faster.

At the gates you might also see police dogs and additional surveillance cameras.

What you won’t see are the undercover officers and FBI agents blending in. Bates said security and safety personnel, which includes law enforcement, firefighters and paramedics, is up 20% from last year.

“The whole point of that is to look for vehicles that are stolen, or depending on the registration, wanted individuals that are trying to come in here and potentially cause harm. We don’t want that to happen,” Bates said.

Other new features revealed at a press conference Wednesday include two helicopters from US Border Patrol which will patrol from the skies.

The Transportation Security Administration (TSA) will provide a temporary flight restriction over the track starting one hour before the race and ending one hour after the race.

Those new features and several more will make your entrance more arduous – but also more safe.

With all of these new security features, fans are being advised to arrive at the track at least two hours earlier than they have in previous years.

“I think it’s fantastic,” said Albright, who traveled from New Zealand to see the Indy 500 for the first time. “All the security in the world, can’t beat it.”

Boles warned fans that gates 1, 6 and 9 will be especially busy so he suggests looking for other entrances nearby to get in quicker.

One new feature to help that process will be called a pre-check or secondary perimeter.

Workers can check your coolers and bags well before you make it to certain gates. Once your items are searched you’ll be allowed to jump into an express lane.