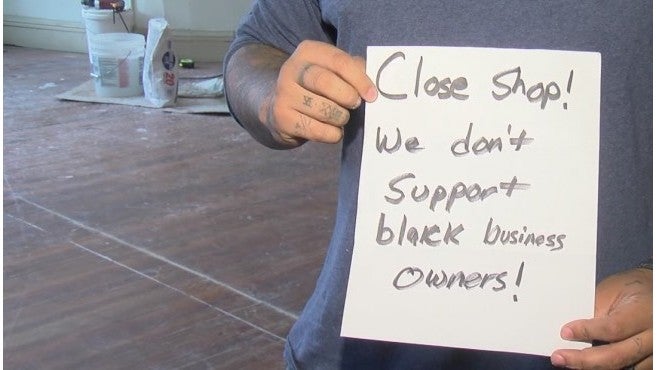 INDIANAPOLIS (WISH) – Business owners in the Irvington neighborhood on the city’s east side have received a racist note demanding they close down — even before they had even opened.

But, like any good business owner, they’re turning this hatred into an opportunity.

The future of Level Up Gaming Lounge will sit at the corner of East Washington Street and Johnson Avenue. Inside, there is a lot of work to do. Level Up Gaming Lounge is set to open in late September. Workers have been renovating the space for two months and still have months to go. But, owners Sami Ali and Tony Jones have a clear vision.

Ali added, “Tons of TVs, tons of game consoles, pool table downstairs in the basement, pingpong ball. I just want a place for people to come in and enjoy themselves.”

But, not everyone is interested. Ali found the note Tuesday.

“He had called me as I was walking in and he had asked, ‘Hey are you sitting down?’ I’m thinking the worst has happened. He said, ‘Man, I got a racist note,'” Jones said.

Ali added, “My business partner is black. I’m Puerto Rican and Arabic. The fact that we are not even open and so many people are trying to get us out already, it’s kind of disappointing and discouraging.”

But, they’re not going to let the note stop them. In fact, it’s motivating them to work harder with greater purpose.

Ali said he plans to frame the note and hang it inside the business as motivation to keep them going.