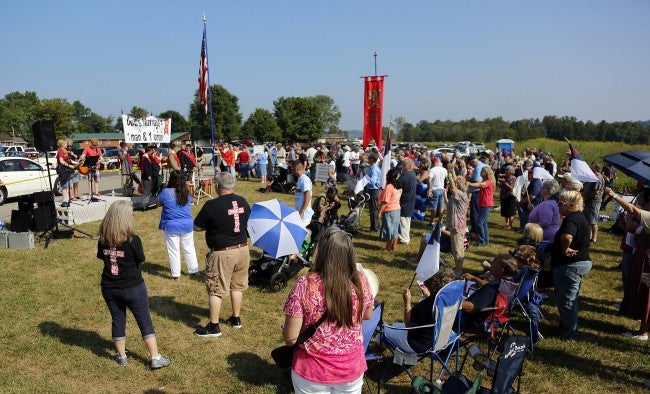 GRAYSON, Ky. (AP) – They stood chanting outside the jail house, “Thank you, Kim; Thank you, Kim,” and prayed that the defiant county clerk locked inside could hear them.

As Rowan County Clerk Kim Davis began her third day as an inmate at the Carter County Detention Center on Saturday, having chosen indefinite imprisonment over licensing gay marriage, around 300 people gathered on the lawn outside.

“She won’t bow, I promise you,” Davis’ husband, Joe, told the crowd. “She sends her love to each and every one of you all. And this is what she said, ‘All is well. Tell them to hold their head high because I am.'”

Part revival, part political rally, a series of speakers denounced the government and the judiciary, and hailed Davis a Christian hero in a war against the godless. They waved signs that read “Kim Davis for President,” ”no to sodomite perversion” and “God gives his hardest battles to his strongest soldiers.”

Some traveled from states away to support of the embattled clerk, held in contempt of court by U.S. District Judge David Bunning on Thursday and sent to jail until she agrees to follow the court’s order. She has pledged she never will.

News of her imprisonment rocketed around the world, igniting a furious debate over religious freedom and the place of God in government.

As the temperature topped 90 degrees in Grayson, Kentucky, Davis’ supporters sweated and shouted for more than an hour.

“More fear man, they don’t fear God,” Matthew Trewhella, a pastor from Wisconsin, preached from the stage. “She said that she was doing this under God’s authority. She is 1,000 percent correct. She is echoing what western man has said for over 1,500 years now. And that is that divine law trumps human laws.”

Davis refused to issue marriage licenses for two months since the Supreme Court legalized gay marriage across the nation. Despite a series of court orders, she continued turning couples away.

Bunning told Davis Thursday that she’d left him no choice.

The judge, appointed to the court by President George W. Bush, became a target of the crowd’s rage. A man carried a sign as big as a bathtub: “Judge Bunning is an abomination,” it read and pointed to a Bible passage that says, “Acquitting the guilty and condemning the innocent — the Lord detests them both.”

Local evangelist Randy Smith called on the judge to “get saved and repent from his sin.” He bashed the governor, the attorney general and local officials — all for declining to help Davis’ crusade. And he asked God to see to it that the five Supreme Court justices who voted to legalize gay marriage be unseated.

He asked Christians across the globe to spend Thursday fasting and praying for Davis, to mark “one week of unlawful tyranny.” He asked them to be ready for war against religious oppression.

The couples Davis turned away for two months finally received their licenses Friday, and said they spent Saturday celebrating their lives together, in peace for the first time since the controversy erupted around them.

But on the jailhouse lawn, the rally’s organizers distributed fliers that listed what Davis’ supporters should do: pray for her release, write the judge and demand she be set free, send Davis postcards to jail, where she remains in a cell alone though allowed a Bible to read.

“The wicked are trying to make an example of her but God can turn it around,” the flier reads. “Pray that America repents of the sin of celebrating sexual perversion and imprisoning Christian dissidents.”