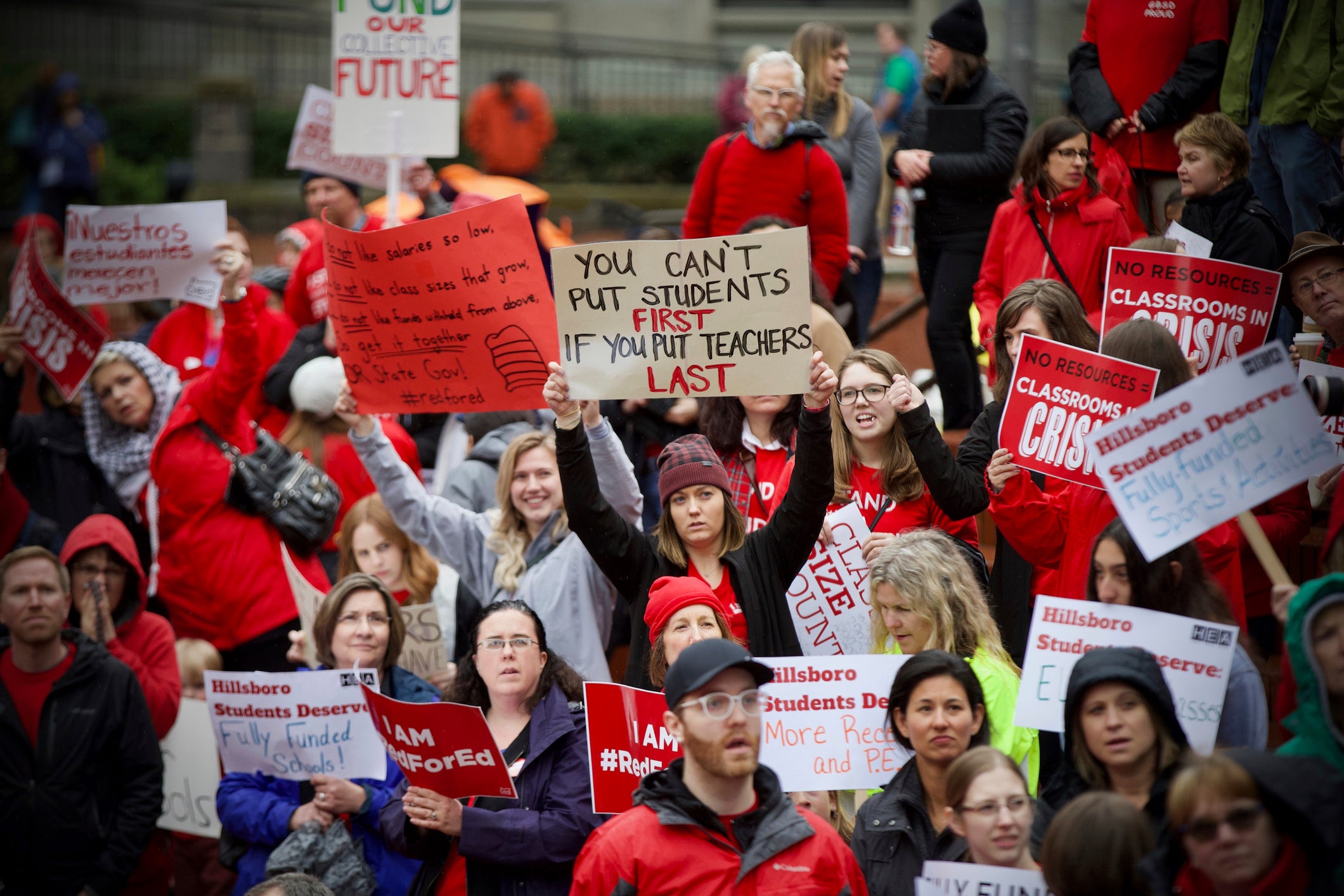 PORTLAND, Ore. (AP) — Tens of thousands of teachers across Oregon walked off the job Wednesday to demand more money for schools, holding signs and wearing red shirts that have become synonymous with a nationwide movement pushing lawmakers to better fund education.

Schools around the state, including Oregon’s largest district, Portland Public Schools, planned to close for part of the day. An estimated 20,000 people massed in a downtown Portland park for a rally before beginning a march through the city. The demonstrators — a mix of teachers, parents and students — wore red to support the “Red for Ed” campaign that’s taken hold nationwide and chanted that slogan.

They called on state lawmakers to expand school funding in Oregon, which has some of the largest class sizes and lowest graduation rates in the United States.

The action follows a wave of teacher activism that began in West Virginia in 2018 and was followed by Oklahoma, Kentucky, Arizona and elsewhere. Teachers in North Carolina and South Carolina rallied at their respective state capitols last week seeking more money.

Unlike other states, Oregon teachers say they’re not pushing for pay raises or other union demands. They say they’re walking out to highlight the conditions inside the classroom and how years of low funding has affected learning opportunities.

Teachers in Woodburn say they need more counselors and support staffers to respond to the increasing number of students displaying complex behavioral problems. A third of students are English language learners and more than 40% of families rely on food stamps in the town about 30 miles (48 kilometers) south of Portland.

“They have to be both a teacher and a counselor to the more than 30 kids in their class,” said Cherene Mills, a teacher at Valor Middle School. “What educators are finding is that they have to put up with so much that the pay isn’t worth it. If lawmakers could decrease our class sizes, that would go a longer way than just increasing our pay.”

The walkout comes as Republicans in the state Senate are blocking a vote on a $1 billion education tax. All 12 Republicans failed to show up Tuesday and Wednesday, denying the Senate enough members to allow a vote.

A Democratic supermajority had been poised to approve the $1 billion in additional annual funding for schools. The legislation would raise revenue through a half a percent tax on some of Oregon’s wealthiest businesses.

Republicans say the tax plan would raise the prices of consumer goods without fixing the education system. They also said they would not support a funding package that doesn’t address the state’s pension debt, which has soared past $25 billion.

John Larson, president of the Oregon Education Association, said Republicans’ refusal to vote on a funding package is exactly why teachers are protesting.

“It just mystifies me that adults just can’t sit in a room and do what’s right for kids,” he said. “This is why educators need to stand together and tell them to get back to work.”

Oregon schools are unusually dependent on state funds after voters moved to change the school funding formula in the 1990s in an effort to limit property taxes. Since then, lawmakers have struggled to find an adequate source of revenue to keep up with rising costs.

The walkout in Oregon builds on the previous strikes across the U.S. but also shows teacher demands have begun to encompass issues beyond pay, said Robert Bruno, an expert on teacher labor issues at the University of Illinois at Urbana-Champaign.

“Now the issues are far more diverse, and they’re about cultural inclusion, they’re about fighting poverty, about making sure that you get schools some nurses,” he said.

The time is “very ripe” for the protest, Bruno said.