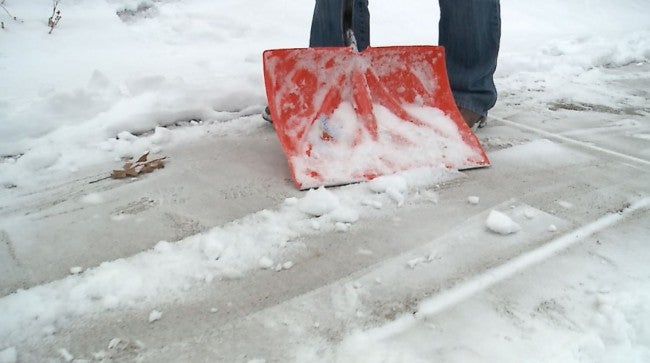 24-Hour News 8 found several stretches of sidewalk still packed with snow. The city ordinance states a property owner or occupant must clear a path and get rid of ice.

They’re given about half a day to do so after snow stops falling or else face a $50 fine. However, the ordinance isn’t heavily enforced.

“I mean it would be nice if everybody got to it for sure. I mean it is frustrating and you don’t want to see anybody fall and get hurt. That’s why I’m out tonight,” said Naill Brady outside his home on the near north side.

Brady nearly fell a few times while shoveling his sidewalk. That’s because underneath the powder was a sheet of ice.

With temperatures falling back below freezing for the next several days, that recently melted snow could turn back to ice for some time.

It’s not just sidewalks that are affected.

The concern lies with the residential streets. Those didn’t get plowed after last weekend’s storm.

Wednesday’s warm up helped clear off most of the mess, but some streets still had slushy leftovers and puddles. All of that could freeze Wednesday night and stay that way for several days because of the temperatures.

24-Hour News 8 talked with two plow companies Wednesday. Both felt waiting for six inches of snow is unfair to homeowners. But some who live on those very streets don’t see it that way.

“It’s really a balance of budget, right? And effort,” said homeowner Eric Dannenmaier. “So if they try to get out and knock it out every single time there’s just a couple inches then we’re just going to blow the city budget.”

The city will spend some of its budget Wednesday night into Thursday morning.

With the potential for snow in the forecast, 90 trucks will be out throwing down salt and plowing on the main and secondary streets. They’re trying to make sure the morning commute is a safe one. Their shift should wrap up around 11 a.m. depending on the weather conditions.