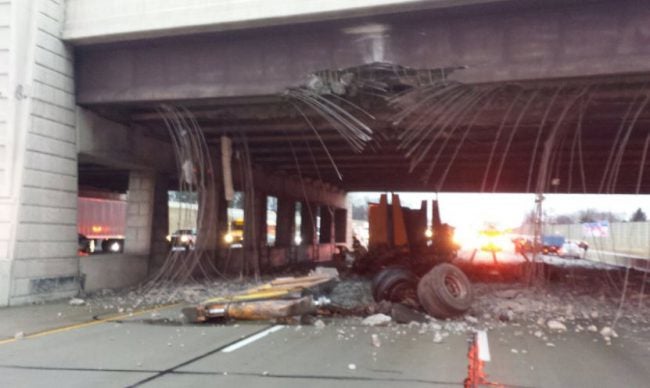 INDIANAPOLIS (WISH) – Repairs on the Rockville Road bridge over I-465 are one step closer to completion.

Workers can’t start to rebuild until they remove parts of the bridge. They’re also waiting for a set of bridge beams to arrive.

INDOT expects the repairs to last for months.

Lloyd Doogan of Indianapolis said the construction is doubling his commute time and sending his stress levels soaring.

“It’s like they’re driving in New York City,” Doogan said of the traffic. “They just cut you off.”

On January 10, state police said a car crusher on a semi-trailer malfunctioned, expanded and collided with the overpass.

Construction workers are waiting on bridge beams to arrive in about two months.

“You never know what’s going to be around the corner, but we’re optimistic,” Riggs said. “We’ve got this project on the fastest track possible and we’re working with the contractor to make this work happen as quickly as possible.”

The plan is to keep Rockville Road open.

Riggs said INDOT won’t close any more lanes this week, but the agency will announce some short-term lane restrictions in the weeks ahead.

INDOT workers have not posted any detours, according to Riggs.

“With Rockville Rd. being restricted, the number of options are somewhat limited,” Riggs said. “There’s only so many bridges and interchanges on the west side.”

“I leave an hour early every day,” Doogan said.

Some days he just weaves through all the orange cones, even if that means slamming on the brakes when he gets cut off.

INDOT won’t disclose how much the project is expected to cost.

Riggs said INDOT is seeking a full reimbursement from Twins Trucking, the company that owns the truck that caused the damage.