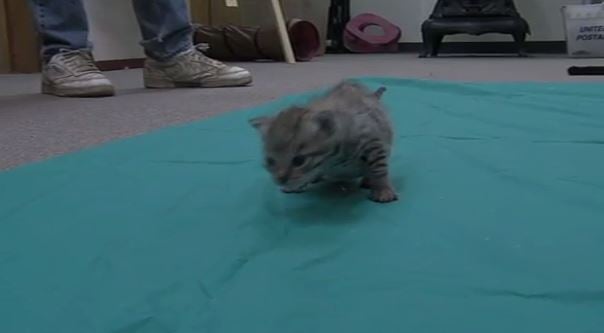 Back in April they weren’t sure what kind of cat this was or if it would even survive.

This kitten has been determined to be a Bengal cat mix, which is part Asian leopard cat and part domestic.

“We know that there was a lady in the neighborhood where he was found that had two male Bengals,” Herrberg said. “And she said they were escape artists. So that makes us think that they probably mated with a domestic and this is the result.”

That being said, Bengal cats including this kitten, can technically be kept in your home as a pet.

“All of the little cats, the bobcats, the servals, the lynx, they aren’t necessarily dangerous if they’ve been raised as pets,” Herrberg said. “But the downside is once they mature they will mark everything in your house and that’s when people start getting rid of them.”

But as this little guy continues to eat, sleep and grow, Herrberg says he won’t have to worry about finding a new home.

That’s because they plan on keeping him around.

“We’ll gradually see how he adapts to other cats,” Herrberg said. “He may grow up and think he’s human. I don’t know!”

Showing his new exotic family members, even though he may be a bit smaller, he’s still part of the pack.

The kitten gets a visit from the vet every week.

He does not yet have a name.