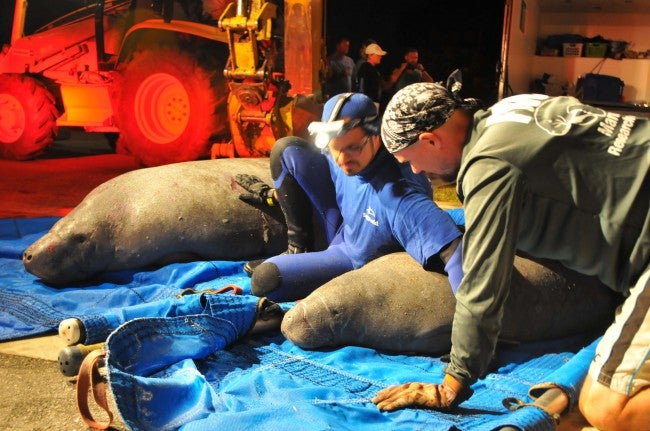 SATELLITE BEACH, Fla. (AP) – Rescuers working late into the night freed 19 manatees that were stuck in a storm drain in Florida.

Capt. Jay Dragon of the Satellite Beach Fire Department said early Tuesday that the 19 manatees were all alive and were returned to the Indian River Lagoon System.

A manatee-rescue team from the Florida Fish and Wildlife Conservation Commission, along with police and firefighters, were helping the marine mammals Monday evening. Rescuers brought heavy earth-moving equipment to the Satellite Beach neighborhood, located on a barrier island on Florida’s central Atlantic Coast near Cape Canaveral.

Authorities initially said there were as many as 15 manatees stuck in the drain.

FWC Research Institute spokesman Brandon Basino said it is unclear exactly how the manatees became stuck, but noted that there was no grate on the storm drain. However, he added that manatees typically seek out warm habitats for the winter months.

“They’re also curious animals, so there are a number of reasons they could have swam up there,” Basino said. “We’re still looking up how long they have been in the drainage system and working with the city to resolve the issue.”

In the meantime, a temporary structure has been placed on the storm drain to prevent other manatees from swimming into it.

Basino said while the rescue was a lengthy process that manatees are able to survive out of water for extended periods of time. He added that the moist, dark and cooler temperatures at night were “factors working in our favor.”

When they were released, all of the manatees were marked on their backs with a grease pen. The non-toxic markers will allow FWC biologists to identify the rescued manatees when they check on their conditions.