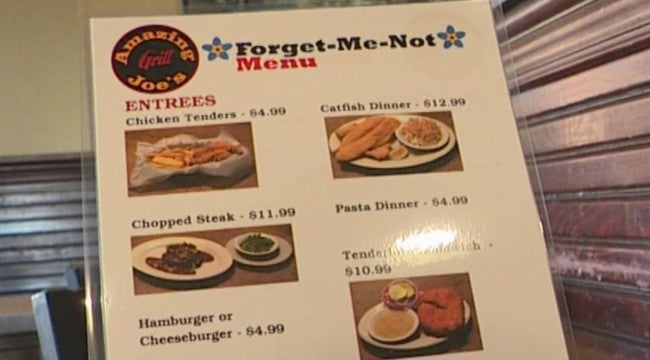 COLUMBUS, Ind. (WISH) — A restaurant is changing its menu and atmosphere for a special clientele: people with dementia and their families.

It’s an effort to bring community to a population that often feels isolated, even as that population continues to grow.

For Nick Grams, managing partner at Amazing Joe’s in Columbus, greeting customers, checking on the food and the menu is part of the job.

But a new menu is coming for those who want it Sunday afternoon.

With bright photos and catchy title “Forget-Me-Not,” it’s aimed to help those who sometimes struggle with that very thing.

“I lost my mother earlier this year to dementia,” Grams said.

It’s a fight he knows all too well. His mother passed after battling the condition for two years, the last 14 months in assisted living.

“Definitely a crapshoot,” he said. “We always tried to pick her favorite restaurants, but there were challenges.”

Some of those challenges included a forgotten order, music too loud and too much commotion.

They are obstacles he hopes to remove with a dementia-friendly atmosphere at Amazing Joe’s once a month on a Sunday afternoon.

The restaurant will provide an optional limited menu with pictures, will seat people in the quieter back room, close to the smells of the kitchen and turn down the lights and music, even if they don’t remember.

“It’s living in the moment and something they enjoy and they feel engaged in,” Sue Lamborn said, the outreach manager of Thrive Alliance, the group which developed the idea.

Thrive Alliance is the state’s Agency on Aging for the five-county area.

Lamborn said dementia-friendly dining is not just for the patient though. It’s just as much for the caregiver, who has a stressful and thankless job and often feels just as isolated.

“Sometimes that person doesn’t want to go out and engage or be social or do the things they used to do,” Lamborn said. “We all want people to feel like they belong and that’s not going to happen unless we start doing more initiatives like this.”

With 10,000 people turning 65 today and another 10,000 tomorrow, the number of those people will only continue to grow.

That’s why Grams hopes his effort will begin to create a snowball effect at other businesses including restaurants, coffee shops, even movie theaters.

“Hopefully somebody will be touched by this and they’ll be able to follow in the footsteps of what we have started here,” Grams said.

His mother may not be here in person Sunday afternoon, but she’ll definitely be in his thoughts with every customer coming through the doors.

“I know she’ll be looking down on us, definitely appreciative of what we’re doing, knowing we’re doing the right thing,” Grams said.

Amazing Joe’s in Columbus will offer the dementia-friendly dining option on the second Sunday of every month from 2 to 4 p.m., beginning this Sunday, Dec. 8.

The location in Muncie will soon be offering it, too.

Lamborn said it’s the first restaurant that she’s aware of to do this in Indiana, however, several places in Maine and North Carolina do a similar thing.